From Appropedia
Redirected from New Hampshire 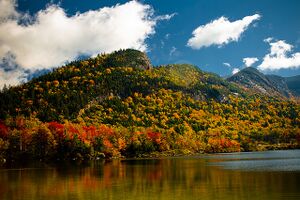 New Hampshire is a state in the New England region of the northeastern United States. It is bordered by Massachusetts to the south, Vermont to the west, Maine and the Gulf of Maine to the east, and the Canadian province of Quebec to the north. Of the 50 U.S. states, New Hampshire is the fifth smallest by area and the tenth least populous, with slightly more than 1.3 million residents. Concord is the state capital, while Manchester is the largest city. New Hampshire's motto, "Live Free or Die", reflects its role in the American Revolutionary War; its nickname, "The Granite State", refers to its extensive granite formations and quarries. It is well known nationwide for holding the first primary (after the Iowa caucus) in the U.S. presidential election cycle, and for its resulting influence on American electoral politics, leading the adage "As New Hampshire goes, so goes the nation".

Page data
Retrieved from "https://www.appropedia.org/w/index.php?title=New_Hampshire_community_action&oldid=668094"
Cookies help us deliver our services. By using our services, you agree to our use of cookies.
Categories:
About Appropedia · Policies · Contact · Content is available under CC-BY-SA-4.0 unless otherwise noted.