From Appropedia
Redirected from Nebraska 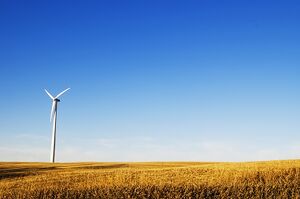 Nebraska ( (listen)) is a state in the Midwestern region of the United States. It is bordered by South Dakota to the north; Iowa to the east and Missouri to the southeast, both across the Missouri River; Kansas to the south; Colorado to the southwest; and Wyoming to the west. It is the only triply landlocked U.S. state.

Indigenous peoples, including Omaha, Missouria, Ponca, Pawnee, Otoe, and various branches of the Lakota (Sioux) tribes, lived in the region for thousands of years before European exploration. The state is crossed by many historic trails, including that of the Lewis and Clark Expedition.

Nebraska's area is just over 77,220 square miles (200,000 km2) with a population of over 1.9 million. Its capital is Lincoln, and its largest city is Omaha, which is on the Missouri River. Nebraska was admitted into the United States in 1867, two years after the end of the American Civil War. The Nebraska Legislature is unlike any other American legislature in that it is unicameral, and its members are elected without any official reference to political party affiliation.

Nebraska is composed of two major land regions: the Dissected Till Plains and the Great Plains. The Dissected Till Plains region consists of gently rolling hills and contains the state's largest cities, Omaha and Lincoln. The Great Plains region, occupying most of western Nebraska, is characterized by treeless prairie. Nebraska has two major climatic zones. The eastern two-thirds of the state has a humid continental climate (Köppen climate classification Dfa); a unique warmer subtype considered "warm-temperate" exists near the southern plains, which is analogous to that in Kansas and Oklahoma, which have a predominantly humid subtropical climate. The Panhandle and adjacent areas bordering Colorado have a primarily semi-arid climate (Köppen BSk). The state has wide variations between winter and summer temperatures, variations that decrease moving south within the state. Violent thunderstorms and tornadoes occur primarily during spring and summer and sometimes in autumn. Chinook wind tends to warm the state significantly in the winter and early spring.

Saline Wetlands Conservation Partnership (SWCP) is a conservation program devoted to the protection and preservation of Nebraska’s Eastern Saline Wetlands. Limited to the floodplain swales and depressions within the Salt Creek, Little Salt Creek, and Rock Creek drainages, it is estimated that the Eastern Saline Wetlands once covered an area in excess of 200,000 acres (810 km2). Recently, due to extensive degradation, draining and filling through commercial, residential, and agricultural development, less than 4,000 acres (16 km2) remain, and many of these remnants are highly degraded. It is becoming increasingly important to preserve this unique wetland resource. Although several existing programs have been recognized to address saline wetland conservation needs, they alone have not been enough to ensure the long term protection of this endangered resource. The Saline Wetland Conservation Partnership (SWCP) was created to offer additional protection and management of the state’s diminishing saline wetlands.

From Wikipedia:Solar power in Nebraska

Solar power in Nebraska is used for only a very small percentage of the state's electricity, although it is rapidly becoming competitive with grid electricity, due to the decrease in cost and the eight-year extension to the 30% tax credit, which can be used to install systems of any size. In 2015, the state ranked 47th among the 50 U.S. states with 1.1 MW of installed capacity.

Solar power and wind power could be harvested to provide all of Nebraska's energy need, although they would require either transmission lines to provide power when neither is available or storage. Estimates show that Nebraska could generate 3,832,600 GWh/year from wind, and 34.1% of demand from rooftop solar panels, using 8,200 MW of solar panels.

From Wikipedia:Wind power in Nebraska

Wind power in Nebraska remains largely untapped in comparison with its potential. In the Great Plains, with more than 47,000 farms and open skies it ranks near the top in the United States in its ability to generate energy from wind. As of 2015, the state had not adopted a renewable portfolio standard. Omaha Public Power District (OPPD) is one of the state's largest purchasers of wind energy.

Page data
Retrieved from "https://www.appropedia.org/w/index.php?title=Nebraska_community_action&oldid=668084"
Cookies help us deliver our services. By using our services, you agree to our use of cookies.
Categories:
About Appropedia · Policies · Contact · Content is available under CC-BY-SA-4.0 unless otherwise noted.