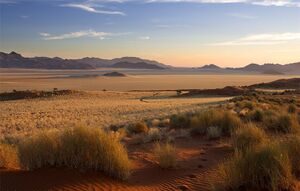 Namibia has a population of 2.1 million people and a stable multi-party parliamentary democracy. Given the presence of the arid Namib Desert, it is one of the least densely populated countries in the world. Namibia enjoys high political, economic and social stability. W

Namibia is one of few countries in the world to specifically address conservation and protection of natural resources in its constitution. Article 95 states, "The State shall actively promote and maintain the welfare of the people by adopting international policies aimed at the following: maintenance of ecosystems, essential ecological processes, and biological diversity of Namibia, and utilisation of living natural resources on a sustainable basis for the benefit of all Namibians, both present and future."

In 1993, the newly formed government of Namibia received funding from the United States Agency for International Development (USAID) through its Living in a Finite Environment (LIFE) Project. The Ministry of Environment and Tourism with the financial support from organizations such as USAID, Endangered Wildlife Trust, WWF, and Canadian Ambassador's Fund, together form a Community Based Natural Resource Management (CBNRM) support structure. The main goal of this project is promote sustainable natural resource management by giving local communities rights to wildlife management and tourism W

In 2001, the government of Namibia approved the Forest Act No. 12. This act allows local communities to obtain forest management rights from the Ministry of the Environment and Tourism. In 2004, 13 communities signed the first community forest agreement with the Minister of the MET. The Community Forest Act focuses on the management of all types of natural vegetation. The term "forest" can include woodlands, grazing areas, farms, settlements, roads and rivers. The term "Forest Resources" refer to natural resources such as trees, fruits, shrubs, herbs, grasses and animals.

Profits from the conservancies are pooled together and used for the benefit of the community. The money can be used for projects such as building schools, daycare facilities or clinics. For example, the Torra Conservancy contributed $2,000 for school renovations, including buying a new photocopier. The profits have also been used for purchasing equipment such as ambulances, while other funds are allocated to individuals as a payment for being a member of the conservancies.

Since the introduction of the conservation legislation in 1996, benefits to the local communities have greatly increased. In 2004, the annual earnings for all 31 conservancies combined equaled $2.35 million, compared to $100,000 in 1995. The first self-sufficient conservancy was the Torra Conservancy, and in 2003, the annual average monetary distribution to their members was about $75. The progress of the CBNRM programs has been such that approximately 1 out of 12 Namibians is a member of a communal wildlife conservancy. W

South Africa, Namibia and Botswana: "Biocultural protocols - community approaches to Access and Benefit Sharing". Civil society organizations have mobilized efforts to develop bio-cultural protocols with different local indigenous communities which will help to provide a model whereby local communities can share the benefits if local resources and expertise are developed for market purposes.