From Appropedia
Redirected from Montana 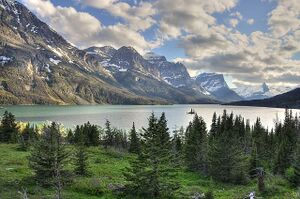 Montana ( (listen)) is a state in the Mountain West subregion of the Western United States. It is bordered by Idaho to the west; North Dakota and South Dakota to the east; Wyoming to the south; and by the Canadian provinces of Alberta, British Columbia, and Saskatchewan to the north. It is the fourth-largest state by area, the seventh-least populous state, and the third-least densely populated state. The western half of Montana contains numerous mountain ranges, while the eastern half is characterized by western prairie terrain and badlands, with smaller mountain ranges found throughout the state. In all, 77 named ranges are part of the Rocky Mountains.

From Wikipedia:Solar power in Montana

Solar power in Montana on rooftops could provide 28% of all electricity used in Montana from 3,200 MW of solar panels.

Net metering is available to all consumers for up to at least 10 kW generation. Excess generation is rolled over each month but is lost once each year.

Montana energy data & statistics from the U.S. Department of Energy

Dispatches From the Edge of Change: Why Montana’s Fossil-Fuel Resistance Gives Me Hope, September 9 [2]