From Appropedia
Redirected from Jakarta 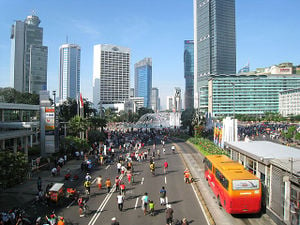 Jakarta during monthly Car Free Day, on the last Sunday every month. The Thamrin and Sudirman avenue from National Monument to Senayan area is closed from cars and any motorized vehicles from 6 AM to 12 AM, except for TransJakarta Bus Rapid Transit system. Morning gymnastics, futsal games, jogging, bicycling, badminton, karate, an on-street library and musical performances take over the road. May 2010
Location data
From Wikipedia:Jakarta

Jakarta (; Indonesian pronunciation: [dʒaˈkarta] (listen), Betawi: Jakarte), formerly Dutch: Batavia, officially the Special Capital Region of Jakarta (Indonesian: Daerah Khusus Ibukota Jakarta) is the capital and largest city of Indonesia. Lying on the northwest coast of Java, the world's most populous island, Jakarta is the largest city in Southeast Asia and serves as the diplomatic capital of ASEAN.

From Wikipedia:Jakarta § Parks and lakes

In June 2011, Jakarta had only 10.5% green open spaces (Ruang Terbuka Hijau), although this grew to 13.94%. Public parks are included in public green open spaces. There are about 300 integrated child-friendly public spaces (RPTRA) in the city in 2019. As of 2014, 183 water reservoirs and lakes supported the greater Jakarta area.

As a metropolitan area of about 30 million people, Jakarta has a variety of transport systems. Jakarta was awarded 2021 global Sustainable Transport Award (STA) for integrated public transportation system.

The city prioritized development of road networks, which were mostly designed to accommodate private vehicles. A notable feature of Jakarta's present road system is the toll road network. Composed of an inner and outer ring road and five toll roads radiating outwards, the network provides inner as well as outer city connections. An 'odd-even' policy limits road use to cars with either odd or even-numbered registration plates on a particular day as a transitional measure to alleviate traffic congestion until the future introduction of electronic road pricing.

There are many bus terminals in the city, from where buses operate on numerous routes to connect neighborhoods within the city limit, to other areas of Greater Jakarta area and to cities across the island of Java. The biggest of the bus terminal is Pulo Gebang Bus Terminal, which is arguably the largest of its kind in Southeast Asia. Main terminus for long distance train services are Gambir and Pasar Senen. High-speed railways being constructed connecting Jakarta to Bandung and another one is at planning stage from Jakarta to Surabaya.

Privately owned bus systems like Kopaja, MetroMini, Mayasari Bakti and PPD also provide important services for Jakarta commuters with numerous routes throughout the city. Pedicabs are banned from the city for causing traffic congestion. Bajaj auto rickshaw provide local transportation in the back streets of some parts of the city. Angkot microbuses also play a major role in road transport of Jakarta. Taxicabs and ojeks (motorcycle taxis) are available in the city.

TransJakarta (stylised as transjakarta, often erroneously called Busway) is a bus rapid transit (BRT) system in Jakarta, Indonesia. The first BRT system in Southeast Asia, it commenced operations on 15 January 2004 to provide a fast public transport system to help reduce rush hour traffic. The system is considered as the first revolutionary public transit mode in the capital city of Indonesia. The buses run in dedicated lanes (busways), and ticket prices are subsidised by the regional government. TransJakarta has the world's longest BRT system (251.2 km in length), which operates about 4,300 buses. As of February 2020, it serves an average of 1.006 million passengers daily.

As of September 2019, Transjakarta is currently testing electric buses, with Bundaran Senayan – Monas as its first route. Transjakarta has undertaken an ambitious plan to expand its electric bus (e-bus) fleet to 10,000 units over the decade.

Jakarta suffers from severe problems of environment and livability:

Page data
Retrieved from "https://www.appropedia.org/w/index.php?title=Jakarta_community_action&oldid=656264"
Cookies help us deliver our services. By using our services, you agree to our use of cookies.
Categories:
About Appropedia · Policies · Contact · Content is available under CC-BY-SA-4.0 unless otherwise noted.