From Appropedia
Redirected from Hawaii 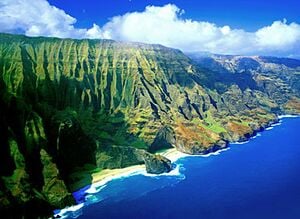 Hawaii ( (listen) hə-WY-ee; Hawaiian: Hawaiʻi [həˈvɐjʔi] or [həˈwɐjʔi]) is a state in the Western United States, located in the Pacific Ocean about 2,000 miles (3,200 km) from the U.S. mainland. It is the only U.S. state outside North America, the only state that is an archipelago, and the only state geographically located within the tropics.

Hawaii comprises nearly the entire Hawaiian archipelago, 137 volcanic islands spanning 1,500 miles (2,400 km) that are physiographically and ethnologically part of the Polynesian subregion of Oceania. The state's ocean coastline is consequently the fourth-longest in the U.S., at about 750 miles (1,210 km). The eight main islands, from northwest to southeast, are Niʻihau, Kauaʻi, Oʻahu, Molokaʻi, Lānaʻi, Kahoʻolawe, Maui, and Hawaiʻi—the last of these, after which the state is named, is often called the "Big Island" or "Hawaii Island" to avoid confusion with the state or archipelago. The uninhabited Northwestern Hawaiian Islands make up most of the Papahānaumokuākea Marine National Monument, the United States' largest protected area and the fourth-largest in the world.

Of the 50 U.S. states, Hawaii is the eighth-smallest in land area and the 11th-least populous, but with 1.4 million residents ranks 13th in population density. Two-thirds of the population lives on O'ahu, home to the state's capital and largest city, Honolulu. Hawaii is among the country's most diverse states, owing to its central location in the Pacific and over two centuries of migration. As one of only six majority-minority states, it has the country's only Asian American plurality, its largest Buddhist community, and the largest proportion of multiracial people. Consequently, it is a unique melting pot of North American and East Asian cultures, in addition to its indigenous Hawaiian heritage.

From Wikipedia:Solar power in Hawaii

The energy sector in Hawaii has rapidly adopted solar power due to the high costs of electricity, and good solar resources, and has one of the highest per capita rates of solar power in the United States.Hawaii's imported energy costs, mostly for imported petroleum and coal, are three to four times higher than the mainland, so Hawaii has motivation to become one of the highest users of solar energy. Hawaii was the first state in the United States to reach grid parity for photovoltaics. Its tropical location provides abundant ambient energy.

Much of Hawaii's solar capacity is distributed solar panels on individual homes and businesses. Hawaii's grid has had to deal with this unique situation by developing new technology for balancing the energy flows in areas with large amounts of solar power. In 2017 distributed solar produced 913GWh which was 36% of all renewable energy produced in the state and about 9% of electricity sales. Utility-scale solar produced 212GWh, just over 1% of sales. In December 2016, Hawaii had 674MW of installed distributed solar capacity. The largest utility-scale solar farm in Hawaii is the 49 MW Kawailoa Solar project which opened in September 2019.

From Wikipedia:Wind power in Hawaii

This Hawaiian mayor is scoring touchdowns for clean energy, Aug 8[2]

University of Hawaii System votes to divest from fossil fuels, May 22[5]

Hawaii Will Soon Get All Of Its Electricity From Renewable Sources, May 7

Will Hawaii be the First State to Go 100 Percent Renewable? March 16[6]

Maui runner circumnavigating the state to save the environment, February 2[7]

From Wikipedia:Environmental issues in Hawaii

The majority of environmental issues affecting Hawaii today are related to pressures from increasing human and animal population and urban expansion both directly on the islands as well as overseas. These include the unsustainable impacts of tourism, urbanization, implications of climate change such as sea level rise, pollution, especially marine plastic pollution, and invasive species.

Page data
Retrieved from "https://www.appropedia.org/w/index.php?title=Hawaii_community_action&oldid=667943"
Cookies help us deliver our services. By using our services, you agree to our use of cookies.
Categories:
About Appropedia · Policies · Contact · Content is available under CC-BY-SA-4.0 unless otherwise noted.