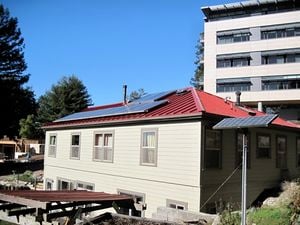 The purpose of this page is to describe the solar hot water system used by the Campus Center for Appropriate Technology (CCAT) on the campus of Cal Poly Humboldt (HSU).

Developed as a live in laboratory for sustainability, the student run, student funded, and student staffed organization is now located in a residential style house on the south side of campus(Figure 1). Since becoming an associated students program in 1980, CCAT has been organized around the goal of providing appropriate technology information to the public.

One example of appropriate technology featured at CCAT is the solar hot water system, which provides hot water for the entire house using the thermal energy from the sun and is considered to be the most functionally efficient system still operating at CCAT as of October 2011. 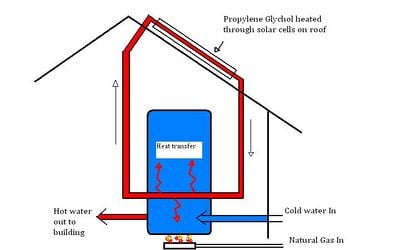 In July of 2009, two solar-thermal cells were installed on the roof of the CCAT house and connected to the water heater for the building. Figure 2 shown below has been simplified for conceptual purposes. The essential components of the system are the Phoenix high-efficiency water heater, the heating agent propylene glycol and the solar cells, which heat the propylene glycol through solar radiation. 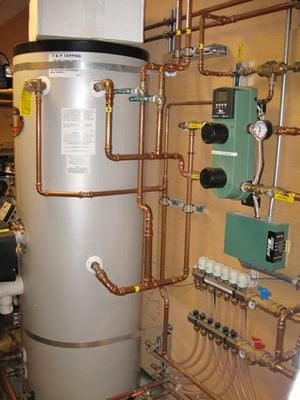 Shown in Figure 3, the Phoenixis a high-efficiency water/space heater powered by either liquid propane or in the case CCAT, natural gas. The system is designed and manufactured by Heat Transfer. By itself the Phoenix offers several advantages over a standard water heater.[2]

The two cells, dedicated to the solar hot water system at CCAT, are manufactured by Schueco; a German company that designs and distributes both components and complete systems designed to capture solar energy. The cells feature highly efficient thermal insulation, absorbent coatings and copper piping which circulates a biodegradable heating agent. The cells utilize the sun's energy to heat, through solar radiation, the heating agent propylene glycol. When connected and properly plumbed the system is a closed loop. The two cells face south in order to achieve maximum sunlight exposure, as seen near the top of the CCAT roof in Figure 1 (the upper-most two panels located on the roof).

CCAT received funding for this project through a grant allocated by the Humboldt Energy Independence Fund (HEIF).[3] The grant proposalsubmitted by the student directors has a total proposed cost not to exceed $14,951. This figure does not account for future costs and/or upkeep but does take into account labor costs for installation. The proposal cites May of 2010 as the date for total project completion.[4]

As a result of the short time in operation and only partial completion of the solar hotwater project, the following issues were not addressed in the above sections.

using data from 2010 it was determined that the solar water system resulted in the use of only 347 therms over the course of the whole year. The average household in California uses around 800 Therms (not considering colder climates). Assuming this average consumption, the solar water system in use at CCAT has saved approximately $212.50 for the year of 2010.