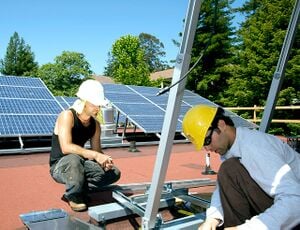 The Humboldt Energy Independence Fund (HEIF) received a proposal written by the Renewable Energy Student Union (RESU) in the spring of 2008 for the installation of a photovoltaic system upon the roof of the old music building at Cal Poly Humboldt. HEIF is a committee which determines the allocation of money toward projects aiming to reduce Cal Poly Humboldt's dependence upon external energy sources. HEIF's proposal for the photovoltaic system was written entirely by Environmental Resource Engineering students who collaborated with RESU. The proposal offers 3 options of varying cost and size; the suggested sizes of the system are 3.5 kW, 5.3 kW, 10.6 kW. This is the first proposal to the HEIF committee which included a stipulation requiring the implementation of student labor; a certain amount of the money given to the contractor for the installation was to be allocated for hiring student workers (Figure 1).

The purpose of installing a photovoltaic system on the music building was to reduce the amount of on campus energy generated by fossil fuels as well as reduce energy cost, to demonstrate that small PV systems are practical, and to educate people on the use of photovoltaic systems. The system harnesses enough energy from the sun to accommodate most of the energy expenses from the building with more than is needed on sunny days. On days where more energy is generated by the panels than is needed, the excess power is fed into the grid for the school to power other buildings on campus. It is not likely that any energy will ever be sold into the power grid because the excess energy produced will never exceed the total energy needed to power the campus. (T.C. Comet, personal communication, 21 October, 2009)

The proposal for the photovoltaic system was written March 2008 and accepted April 2008. It contains two main phases of installation: 1)technical and 2)aesthetics. The aesthetic portion has been divided into an artistic display and educational display, each being directed by respective student bodies. The artistic display will be designed and installed by HSU art students, the educational display will be designed and installed by Natural Resource Planning and Interpretation students.

The proposal's timeline suggests construction should begin in late August 2008 with the artistic and educational components promptly following in September and December. The actual installation of the system began in the early summer of 2009 and was completed by the middle of August 2009. The technical phase is the only phase of the project which has been completed as of December 2009. The aesthetic portion of the project is expected to begin during the spring semester of 2010. The projected 25 year energy generation is 360,500 kW at $62,000 or $0.27 per unit.

The PV system selected and built was the 10.6 kW system consisting of 72 panels (Mitsubishi PV-MF165EB3). Figure 2 shows the flow of energy for the photovoltaic system. The company which manufactured the panels is Mitsubishi. The panels are arranged into 6 rows of 12 with their faces oriented south west to capture the greatest amount of sunlight per day. As the panels are hit by sunlight, electrons are knocked off the material and are released into the circuit. First the electricity travels through an inverter to convert the from DC to AC so that the building can use it. The inverter then sends the energy to the breaker to either be utilized by the music building or be put into the campus wide grid. The inverter also has a component which monitors the amount of energy passing through it called a Sunny WebBox. The Sunny WebBox sends the data through an external router to a server which records and stores the data (Sunny Portal). 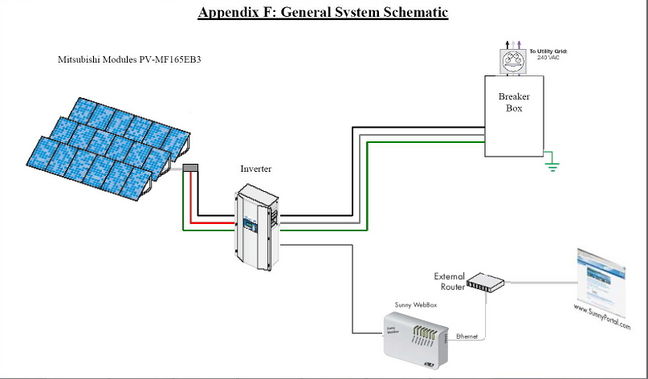 Figure 2:A schematic of the energy flow for the photovoltaic system, taken from page 21 of the pv old music spring 08.pdf RESU Proposalto HEIF.

All that remains to be completed is phase two of the project which consists of creating an aestheticly pleasing look to the panels. This final phase should be completed by the summer of 2010 and will signify the completion of the HEIF project.