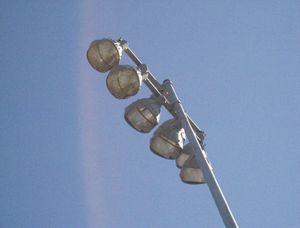 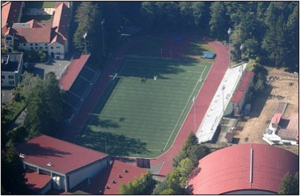 Cal Poly Humboldt is changing the lighting system around the Redwood Bowl sports field in order to reduce emissions, light pollution, and energy consumption. Students of the Green Campus Programor (GCP) wrote a proposal that was submitted to the Humboldt Energy Independence Fund in spring 2009 to gain interest in the subject of retrofitting the Redwood Bowl. This site is dedicated for everyone interested in understanding the current lighting, future lighting, and reasons for retrofit.

The Green Campus Program is a movement directed toward students to lead energy efficient campains at their university. Currently this student-implemented program is at 12 UC and CSU campuses including Standford University. The goal for the interns of The Green Campus Program is to create ideas for energy efficient projects. They also strive to educate the campus about the connection between the environment and energy usage.[1]

HEIF or Humboldt Energy Independence Fund is an organization at Cal Poly Humboldt whos goal is to reduce the environmental impact of the University. HEIF also reachs to implement, monitor, and maintain projects thought of by students to lessen the University's energy usage. HEIF also seeks to publicize their many accomplishments and ideas through multiple media sources.[2]

The proposal titled "Relight Redwood Bowl: Saving Energy, Mitigating Climate Change, and Greening Cal Poly Humboldt" was proposed on April 1st, 2009 by three Green Campus students. Kale Roberts, Jamila Ghoul, and Sarah Schneider wrote this proposal to convince others to support their mission for a greener campus. The proposal caught the interest of 22 various parties, including the president of Cal Poly Humboldt, Rollin Richmond. Rollin stated in a letter to the HEIF committee "I recognize relighting Redwood Bowl as an excellent energy improvement measure." The proposal consists of information and data about the current and future system, their comparison,and how the project will be funded.[3]

The current system consists of 96 fixtures on 8 lead based poles. As shown in Figure 1 and Figure 2, each pole has 12, 1500-watt metal halide standard lamps which use an estimated 162,144 kWh of energy each year. The proposal stated that the lights were used a total of 1126 hours from June 1, 2007 to May 31, 2008. If the data is consistent each lamp, with a life expectancy of 3,000 hours, would need to be changed every three years. Since the time the system has been built in the 1980s, the steps to reach the lamps have been exposed to moist and salty sea air. This causes the catwalks[4] to become brittle and unsafe for repair workers to climb. HSU electrician Jim Long has stated that because each lamp costs about $125, renting a hydraulic lift for $1400, and the cost of labor, it is more financially reasonable and safe to wait till a certain number of lights have burned out on each pole before replacing them.

The Green Campus Program found Musco Lighting® (Musco) Sportscluster Green ™ system, shown in Figures 3 and Figure 4, to be the best for Cal Poly Humboldt. The system made specifically for HSU has 60 fixtures of 1500-Watt metal halide lamps, with an expected annual energy usage of 101,340 kWh/year. Each lamp from this system is meant to last up to 5,000 hours with a constant level of light at 60 foot-candles[6], or FC. The lights will be installed by Cal Poly Humboldt's Plant Operations or (PO) while under the supervision of a Musco representative. To monitor the system's energy consumption once the new system has been installed, GCP interns will use a device known as the ElitePro™ Recording Poly-phase energy meter. The device will allow both GCP and Plant Operations to record the overall efficiency of the new system.

The Proposed System will cost HSU an estimated $261,370. The costs are derived from the material needed to make the lights($139,378), a monitoring device to record data on how the system performs($1,600), and the initial installation and labor($120,392). Due to the added decision of replacing the 8 current poles with 4 non-lead based ones the proposed system's costs have increased.

The differences between the Current System and the Proposed System are expected to be noticeable to both Cal Poly Humboldt and the surrounding ecosystem. Table 1 shows a comparison of the energy used between the two systems and the rebate that the university will receive.

For Cal Poly Humboldt, the new system is projected to reduce annual kWh consumption by 60,804 kWh, according to the Green Campus Program. If the price of energy is $0.24/kWh than there is a yearly saving of $14,592.96 for the university. In addition, the annual kWh saving will lower Cal Poly Humboldt's greenhouse impact of carbon dioxide by 796,525 pounds over 25 years or 31,861 pounds per year.

The proposed system will reduce the amount of light pollution currently produced by 50 percent. The reduction of light pollution will help both the local town of Arcata and the surrounding ecosystem. Currently citizens of Arcata report a good portion of light pollution disturbing their night conditions. This dispersion of light is due to stadium's higher elevation in relation to town residents. The light pollution from The Redwood Bowl also effects the animals which make their home around the complex. A common creature that is active around the Redwood Bowl are bats. This artificial light was found to delay the emergence of juvenile bats, thus leaving them with less mass and a shorter wing span than bats away from artificial light.

In order to fund the new Redwood Bowl's lighting system, Green Campus Program wrote a request proposal for financial assistance. This request was presented to HIEF who granted $75,000 of the originally $261,370 needed for the project. GCP also put in an application to the UC/CSU/Investor-Owned Utilities(IOU)Partnership for $14,593 in rebate funding for the energy savings the project will yield. The cost of $171,777 presented in Table 2 is up to Plant Operations to pay.

"Relight Redwood Bowl (RRB) project just received a green light to move ahead. Construction is slated to begin November 19".[8]<br\><br\> Originally the Musco Lighting® (Musco) Sportscluster Green ™ system was dated to be installed the summer 2009. However, there have been setbacks due to the new found safety hazards of the 8 lead-based poles. The setbacks have resulted in a new date of construction for November 19, 2009.

Fixtures - An electrical device used to create Artificial light.[9]
Foot-Candles - A unit of illuminance, equal to one lumen per square foot.[6]
Lumen - A unit of measurement of Light.[10]
Catwalks - An elevated service platform, used to change light bulbs.[4]