HEIF Take Back the Tap 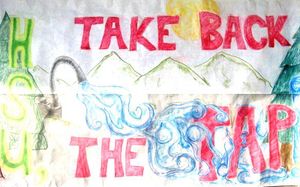 The purpose of this Appropedia page is to educate the public about the Cal Poly Humboldt chapter of the national organization Take Back the Tap. Take Back the Tap is a national organization with many student chapters at campuses across the country. Humboldt State, a member of the CSU system, is located in Northern California in the coastal town of Arcata. The University consumes approximately 80,000 plastic bottles of water annually[1].

Overview of HSU Takes Back the Tap[edit | edit source]

HSU Takes Back the Tap (TBTT) is a student-led campaign that opposes the privatization of water, particularly the bottling of water and its numerous negative environmental, social and health impacts. The TBTT team believes that water is sacred and a basic right belonging to all life on this planet. Therefore, water should not be viewed as a commodity.

The mission of HSU TBTT is 1.) To reduce the consumption of disposable bottled water at HSU; 2.) To promote drinking local tap water in reusable bottles.

In spring 2009, HSU TBTT received grant funding from the Humboldt Energy Independence Fund, or HEIF for a Hydration Station and a series of short, educational videos. HEIF is an organization sustained through strong student involvement and works to finance student-run projects aimed at reducing environmental impact. From grant-writing to campus events, HSU students participating in TBTT are actively seeking and developing methods to eliminate the use of plastic water bottles and to encourage hydration by filling up reusable containers with local tap water.

In an effort to reduce the consumption of single-use plastic water bottles at Cal Poly Humboldt, students from the spring 2009 Environmental Science Capstone class (ENVS 410) began a chapter of TBTT. TBTT is a national organization with many student chapters at campuses across the country. From grant-writing and resolutions, to education and campus events, students are actively seeking and developing ways to eliminate the use of single-use plastic water bottles and to encourage hydration by filling up reusable containers with local tap water. Furthermore, TBTT opposes the privatization of water and advocates for a Clean Water Trust Fund. 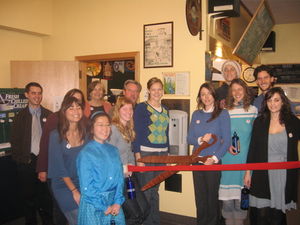 HSU TBTT and members of the Arcata City Council attend the ribbon-cutting ceremony for the installation of one of two Hydration Stations in the Depot on the HSU campus. (Photo by T. Sturgis)

The Official Campus Club is organized as follows:

2. The Pacific Institute found that the production of bottled water requires as much as 2000 times the energy cost of producing tap water. This includes both the PET material and the energy required to turn PET into bottles.

4. Only about 86 percent of empty plastic water bottles in the U.S. land in the garbage instead of being recycled. That amounts to about 2 million tons of PET plastic bottles piling up in U.S. landfills each year. Plastics take thousands of years to decompose when disposed of in landfills.

5. Empty plastic water bottles are also often incinerated, releasing toxic chemicals into the air or they are disposed of in the ocean where the plastic is broken down into smaller and smaller pieces that are mistaken as food by marine organisms.

6. 40 percent of the bottled water sold in the U.S. and Canada is sourced from municipal tap water (e.g. Dasani, Aquafina, Nestle's Pure Life).

7. Bottled water is up to a thousand times more expensive than tap water.

9. Once ready for purchase, bottled water can sit on a shelf for very long periods of time because bottled water companies are not required by law to put an expiration date on the bottles nor are they held legally accountable for any claims they make on their label. The health implications of bottled water include leaching of toxins from the PET bottles into that water, especially if that bottle is exposed to heat or is frozen.

11. Consumers annually spend hundreds to thousands of dollars more on bottled water than water out of their tap. The average cost for tap water is about $2 per 1000 gallons and the average cost of bottled water ranges from $0.89 to $8.26 per gallon.[1] Filling the tank would cost $2 using tap water, and a minimum of $890 using bottled water.

12. About 80,000 single-use, plastic water bottles are sold at HSU each year. The production, transportation, storage and disposal of bottled water to meet HSU's annual bottled water demand requires approximately 43 barrels of oil per academic year and releases 35,300 pounds of carbon dioxide into the atmosphere. 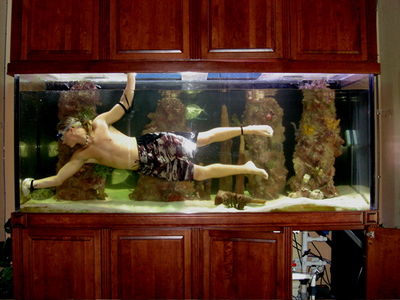 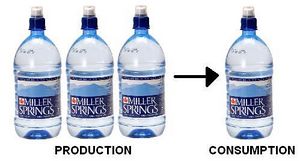 For every liter of water sold, three liters are represented, with one liter available for consumption. (Photo by K. Williams)

The production of plastic bottles requires energy and water (as well as money), resulting in many environmental consequences. One of these impacts is water usage: the water required to produce one bottle outweighs the water bottled for consumption in a ratio of three to one. In effect, two bottles of water are wasted for every bottle of water produced.[5]

The energy required for production, as discussed above, also releases CO2 into the atmosphere. In 2006, more than a quarter million tons of CO2 was released into the air as a byproduct of bottled water.[5]That expulsion of CO2 is approximately the same amount of CO2 produced due to the flaring of fossil fuels in Uruguay in the same year. Additionally, the United States consumes 16.7% of the global bottled water production (based on data collected in 2004), representing a direct relationship to the amount of CO2 produced by the U.S. due to bottled water.[7] More energy is required to fill the bottles with water, transport to the consumer, refrigerate at the grocery stores or in homes, and dispose of the waste (garbage, reuse, recycle, etc.)

After the bottled water is consumed, approximately 14% of the bottles are recycled and the remaining bottles go to the landfills.[8] About two million tons of PET plastic bottles end up in landfills annually[9] (PET stands for polyethylene terephthalate which is a plastic resin found in food, drink, oil, and cosmetic packaging).

Also, many bottles are incinerated. Because of the chemical makeup of these bottles, burning plastic bottles causes a release of toxic byproducts including chlorine gas. 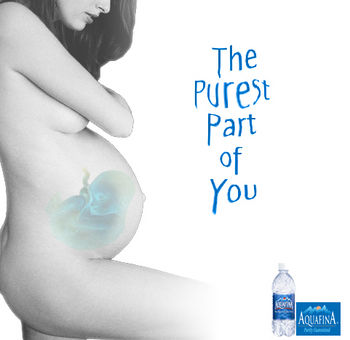 An ad promoting Aquafina bottled water by relating its purity to the existence of a woman's fetus. (Photo by Pepsi Co.)[10]

One reason people choose bottled water are for its media influenced image of purification. A study[11] executed by the Natural Resources Defense Council found that 47% of people drink bottled water because of the sanitation of tap water. In fact, there are health concerns for both tap and bottled water.

Additionally, all-inclusive examinations measuring bottled water production standards exhibit deficiency. The US Food and Drug Administration (FDA), who regulates bottled water in the United States, excludes 60 to 70 percent of all bottled water in its monitoring processes due to state lines logistics.[4]Similarly, a lack of consistency was found among the actual water quality evaluations. The NRDC conducted another study[12] that found microbial levels exceeded accepted guidelines in one-fifth of the brands tested. Duration between health checks varies with tap and bottled water as well. The FDA requires the testing of a sample of bottled water for physical, chemical, and radiological contaminants once a year. The US Environmental Protection Agency (EPA) requires that water systems serving more than one million people have 300 water samples taken monthly to test for contamination.[4]Aside from the quality of the water itself, the container can cause health concerns. Plastic bottles are suspect for leaching toxic chemicals into the water, including DEP, which is a phthalate and is potentially cancer-causing.

In order to spread awareness and take action against bottled water, Take Back the Tap has taken on and completed various projects so far. From permanent on-campus installations to educational socials to outside organization involvement, TBTT has worked to expand the scope and reduce HSU's consumption of bottled water. The following events have helped TBTT create a framework for their organization. 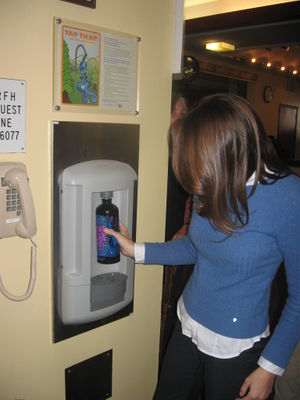 Take Back the Tap recently wrote a HEIF grant proposal which sought to fund a hydration system on campus. They won a grant for one hydration system and received another by donation. The two HydrationStationsTM on campus are found in The Depot and in the Kinesiology & Athletics Building. The HydrationStationsTM process and purify tap water and they are free to use. The goal of the hydration systems is to reduce the sales of plastic bottles by 20 percent in three years. The reduction of plastic bottles sales equate to an off-set of 3,200 kg of carbon dioxide emissions.

On October 14, 2009, TBTT had a Day of Action on campus at HSU. Three films were shown: Flow, Thirst and Liquid Assets. In addition, a panel was organized to discuss the effects plastic bottles have on indigenous peoples around the globe. Much of the plastic waste generated in the U.S is sent to foreign countries, mainly in Asia. These countries either recycle the plastic or dispose of the waste in landfills. Recycling plastic bottles causes chemicals to go into the air. Landfilling plastic bottles cause chemicals to leach into soil. Many indigenous peoples are affected when they breathe contaminated air or are exposed to soil containing harmful chemicals. Furthermore, access to safe, clean drinking water can be impacted by bottling operations that set up their operations at the source of a community's water supply. 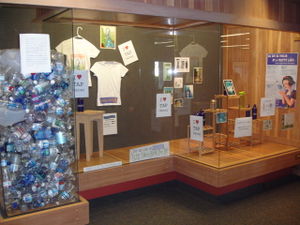 The library display was an effort to educate Humboldt's student body about the consequences of bottled water. (Photo by S. Schneider)[2]

At the beginning of the semester, TBTT put up a display in the HSU Library that received a lot of attention and feedback. In the display, TBTT included approximately 500 plastic bottles (see image on the right) providing a visual of how many plastic bottles are thrown away, as well as to discourage their use. The bottles used in the display were collected from campus a week before the semester formally began. Reusable bottles were featured on the opposite end of the display to encourage their use.

TBTT held a table at the Sustainable Living Arts and Music Festival (SLAM Fest). At the event, TBTT provided education on their organization, encouraged consumption of local tap water and offered information on the consequences of plastic bottles. SLAM Fest is an event held once a year that promotes living sustainably by waste reduction and natural resource conservation.

TBTT worked with Associated Students to create a resolution to support the campaign. The resolution seeks to encourage consumption of local tap water and reduce sales of single-use plastic bottles on campus. A.S. unanimously approved this resolution in April 2009. In addition, TBTT persuaded A.S. Presents to provide a bottle-free alternative for backstage at  the Brother Ali concert (Fresh Air tour) on October 14, 2009. Rappers on the Fresh Air tour chose to go with the bottle-free option (e.g. local tap water in reusable cups), and Brother Ali himself took time to briefly talk about the negative impacts of bottled water on indigenous peoples and the environment.

Take Back the Tap hosts a table on campus each week that offers the following:

Take Back the Tap has a many up-and-coming activities:

A special thanks to Sarah Schneider for all her input and pictures.