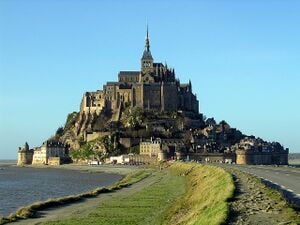 France (French: [fʁɑ̃s] ), officially the French Republic (French: République française), is a transcontinental country predominantly located in Western Europe and spanning overseas regions and territories in the Americas and the Atlantic, Pacific and Indian Oceans. Its metropolitan area extends from the Rhine to the Atlantic Ocean and from the Mediterranean Sea to the English Channel and the North Sea; overseas territories include French Guiana in South America, Saint Pierre and Miquelon in the North Atlantic, the French West Indies, and many islands in Oceania and the Indian Ocean. Due to its several coastal territories, France has the largest exclusive economic zone in the world. France borders Belgium, Luxembourg, Germany, Switzerland, Monaco, Italy, Andorra, and Spain in continental Europe, as well as the Netherlands, Suriname, and Brazil in the Americas via its overseas territories in French Guiana and Saint Martin. Its eighteen integral regions (five of which are overseas) span a combined area of 643,801 km2 (248,573 sq mi) and over 67 million people (as of May 2021). France is a unitary semi-presidential republic with its capital in Paris, the country's largest city and main cultural and commercial centre; other major urban areas include Marseille, Lyon, Toulouse, Lille, Bordeaux, and Nice.

France was one of the first countries to create an environment ministry, in 1971. According to the 2012 Environmental Performance Index conducted by Yale and Columbia, France was the sixth-most environmentally conscious country in the world, one place higher than the previous report in 2010.[1]

Up until a few years ago, the residents of Loos-en-Gohelle, a small town in rural northwestern France with over 6,000 residents, consumed imported industrial food products despite significant local production. In addition to the negative health impacts of their diet, this practice also hurt the local economy. In 2013, the town government of Loos-en-Gohelle started a project called VITAL as part of an ambitious program to improve the diets of Loos-en-Gohelle residents.

The project was built on an existing initiative called Anges Gardins, run by a local association that has worked on community gardens and food education for years. It is also part of a long-term, comprehensive transition to a diverse, sustainable local economy from one dependent on coal mining — an industry that vanished when the French government closed the region's coal mines in 1990, in favor of cheaper imports. Food is viewed as a cross-cutting issue, capable of supporting transition in other sectors.

The policy has a two-pronged strategy to meet the goal. First, to stimulate the demand for local, organic food through education, gardening ambassadors, free produce from open food gardens, and more. The town government led by example, by shifting to 100 percent organic food procurement for schools and 15 percent for retirement homes.

Second, to encourage farmers to convert to organic farming and support food distribution. To help achieve this, the town offered farmers free access to land on the condition that they grow organically and that they convert some of their own existing agricultural land to organic as well, thus raising the share of lands grown organically to 10 percent. Terre d'Opale, another local association, coordinates the farmers to ensure diversity of local production and manage distribution. Distribution is handled weekly through a combination of an online store, delivery of food boxes to local collection points, and procurement through catering businesses.

The program has operated successfully for three years. As the program benefits the entire local food ecosystem, including consumers, farmers, food kitchens, and distributors, it continues to grow and serve more and more of the community.[2]

With an annual average of 243 kg (over 535 pounds) of waste per capita, citizens of Roubaix, in the north of France, were producing less than half their country's average Municipal Solid Waste (MSW). Yet their aim to reduce it even further has brought about the Zero Waste Challenge.

Despite having no executive power on separate collection and other waste-related activities, the city has started a program to lead the zero waste movement in France. The initiative challenges around one hundred volunteer families to reduce the amount of solid waste produced at household level by 50 percent over the course of a year. Offering support through an array of events like workshops, coaching initiatives, and other activities such as food exchanges, the program gives no directions — only suggestions. Interestingly, the program bypasses any intermediaries, therefore creating a direct channel between the city and the families taking part.

After the first year, results were more than encouraging, with 70 percent of participating families having reduced their waste production by around 40 percent, while 25 percent of them had achieved an 80 percent reduction. The policy is now also replicated to target other actors such as public offices, four schools, and shopkeepers in the urban area of Roubaix.[3]

Since the opening of the Nantes tramway in 1985, more than twenty towns and cities across France have built new tram lines. As of 2020, there are 29 operational tram networks in France, with 3 more planned. W

One line is planned to open in Annecy. W

Approximately 20% of the network is suitable for commercial boats of over 1000 tonnes and the VNF has an ongoing programme of maintenance and modernisation to increase depth of waterways, widths of locks and headroom under bridges to support France's strategy of encouraging freight onto water. W

What are we waiting for ? Movie Announcement
Authors: M2R Movies, Nov 2016

City Gardens, maps over 400 green spaces in Paris and has expanded to provide similar services to the French cities of Metz, Lille, Lyon, Montpellier, Strasbourg and the European Green Capital of 2013, Nantes.[4]