From Appropedia
Redirected from Detroit 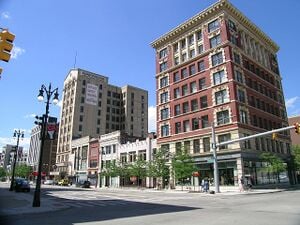 In the 2010s, several initiatives were taken by Detroit's citizens and new inhabitants to improve the cityscape by renovating and revitalising neighbourhoods. Such include the Motor City Blight Busters W and various urban gardening movements. W

Planning and development in Detroit includes efforts aimed at enhancing Detroit's economy and quality of life. In 1970, the private group "Detroit Renaissance" began to facilitate development in the city, while its successor, Business Leaders for Michigan, has continued to facilitate development into the 21st century. Projects have included new commercial facilities, revitalization of neighborhoods, hospitality infrastructure, and improvements to recreational and public facilities, such as the QLine. W

The Greening of Detroit is an urban forestry program and non-profit partner in The Detroit Partnership; it was founded in 1989. In addition to planting trees in the Detroit area, the organization engages in urban forestry education, job training, and other community programs. In 2011, Greening planted 12,156 trees in Detroit, and as of November 2017 has planted over 100,000 trees in the city since the organization's inception. The organization is involved in urban farming, working to maintain and improve urban farms in Detroit. Greening is also working to improve air quality. Its annual operating budget is approximately $3.8 million. Lionel Bradford is the president of The Greening of Detroit.

Lower Eastside Action Plan, Detroit. Community-driven project designed to engage people in a process to transform vacant land and property into uses that improve the quality of life in our neighborhoods and surrounding areas. LEAP on facebook

MoGo vs No Go
Authors: MoGo Detroit, Mar 24, 2021
From Wikipedia:Cycling in Detroit

Detroit is a popular city for cycling. It is flat with an extensive road network with a number of recreational and competitive opportunities and is, according to cycling advocate David Byrne, one of the top eight biking cities in the world. The city has invested in greenways and bike lanes and other bicycle-friendly infrastructure. Bike rental is available from the riverfront and tours of the city's architecture can be booked.

The city has a strong cycling heritage, and first embraced cycling during the "golden age" of the 1890s.

The QLine (stylized as QLINE), originally known as M-1 Rail by its developers, is a 3.3-mile-long (5.3 km) streetcar system in Detroit, Michigan, United States. Opened on May 12, 2017, it connects Downtown Detroit with Midtown and New Center, running along Woodward Avenue (M-1) for its entire route. The system is operated by M-1 Rail, a nonprofit organization.

Detroit SeeClickFix, for reporting community issues to the city

The Detroit Collective That Fuses Cycling and Storytelling, Dec 2[6]

Banding Together to Build a Better CSA, November 10[9]

Why bike commuting is taking off in the nation's car capital, October 27[10]

How This Woman Is Helping Revitalize Detroit, One Garden At A Time, June 4[13]

Page data
Retrieved from "https://www.appropedia.org/w/index.php?title=Detroit_community_action&oldid=667826"
Cookies help us deliver our services. By using our services, you agree to our use of cookies.
Categories:
About Appropedia · Policies · Contact · Content is available under CC-BY-SA-4.0 unless otherwise noted.