From Appropedia
Redirected from Colorado 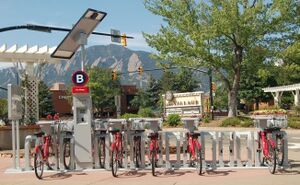 Colorado ( (listen), other variants) is a state in the Mountain West subregion of the Western United States. It encompasses most of the Southern Rocky Mountains, as well as the northeastern portion of the Colorado Plateau and the western edge of the Great Plains. Colorado is the eighth most extensive and 21st most populous U.S. state. The 2020 United States Census enumerated the population of Colorado at 5,773,714, an increase of 14.80% since the 2010 United States Census.

Colorado is bordered by Wyoming to the north, Nebraska to the northeast, Kansas to the east, Oklahoma to the southeast, New Mexico to the south, Utah to the west, and touches Arizona to the southwest at the Four Corners. Colorado is noted for its vivid landscape of mountains, forests, high plains, mesas, canyons, plateaus, rivers, and desert lands. Colorado is one of the Mountain States, and is a part of the western and southwestern United States.

Denver is the capital and most populous city in Colorado. Residents of the state are known as Coloradans, although the antiquated "Coloradoan" is occasionally used. Colorado is a comparatively wealthy state, ranking eighth in household income in 2016, and 11th in per capita income in 2010. It also ranks highly in the nation's standard of living index. Major parts of the economy include government and defense, mining, agriculture, tourism, and increasingly other kinds of manufacturing. With increasing temperatures and decreasing water availability, Colorado's agriculture, forestry, and tourism economies are expected to be heavily affected by climate change

From Wikipedia:Climate change in Colorado § Adaptation

The city of Denver has made recent strides to combat the threat of extreme wildfires and precipitation events. In the year 1996, a fire burned nearly 12,000 acres around Buffalo Creek, which serves as the main source of the city's water supply. Two months following this devastating wildfire, heavy thunderstorms caused flash floods in the burned area, having the effect of washing sediment into the city's reservoir. In fact, this event washed more sediment into the reservoir than had accumulated in the 13 years prior. Water treatment costs were estimated to be $20 million over the next decade following the event. Denver needed a plan to make sure that the city would not be devastated by future wildfire and flash flood events. DenverWater and the U.S. Forest Service Rocky Mountain Region are working together to restore more than 40,000 acres of National Forests lands through processes like reforestation, erosion control, and the decommissioning of roads. Further, Denver has installed sensors in the reservoirs in order to monitor the quality of the water and quantity of debris or sediment. These accomplishments will have the effect of building a more resilient Denver, Colorado towards the impending increase of extreme weather events such as wildfire and flooding.

Boulder, Cycling: Boulder, well known for its bicycle culture, boasts hundreds of miles of bicycle-pedestrian paths, lanes, and routes that interconnect to create a renowned network of bikeways usable year-round. Boulder has 74 bike and pedestrian underpasses that facilitate safer and uninterrupted travel throughout much of the city. The city offers a route-finding website that allows users to map personalized bike routes around the city. In May, 2011, B-cycle bike-sharing opened in Boulder with 100 red bikes and 12 stations.

Denver to Get its First Tiny House Village for the Homeless, Jul 6 [3]