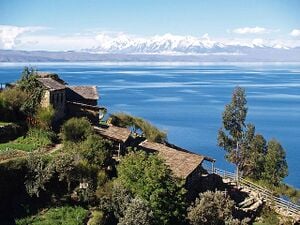 Bolivia, officially the Plurinational State of Bolivia, is a landlocked country located in western-central South America. It is bordered by Brazil to the north and east, Paraguay to the southeast, Argentina to the south, Chile to the southwest and Peru to the west. The seat of government and executive capital is La Paz, while the constitutional capital is Sucre. The largest city and principal industrial center is Santa Cruz de la Sierra, located on the Llanos Orientales (tropical lowlands), a mostly flat region in the east of the country.

The sovereign state of Bolivia is a constitutionally unitary state, divided into nine departments. Its geography varies from the peaks of the Andes in the West, to the Eastern Lowlands, situated within the Amazon basin. One-third of the country is within the Andean mountain range. With 1,098,581 km2 (424,164 sq mi) of area, Bolivia is the fifth largest country in South America, after Brazil, Argentina, Peru, and Colombia (and alongside Paraguay, one of the only two landlocked countries in the Americas), the 27th largest in the world, the largest landlocked country in the Southern Hemisphere, and the world's seventh largest landlocked country, after Kazakhstan, Mongolia, Chad, Niger, Mali, and Ethiopia.

The country's population, estimated at 12 million, is multiethnic, including Amerindians, Mestizos, Europeans, Asians, and Africans. Spanish is the official and predominant language, although 36 indigenous languages also have official status, of which the most commonly spoken are Guarani, Aymara, and Quechua languages.

Bolivia, with an enormous variety of organisms and ecosystems, is part of the "Like-Minded Megadiverse Countries".

Bolivia's variable altitudes, ranging from 90–6,542 metres (295–21,463 ft) above sea level, allow for a vast biologic diversity. The territory of Bolivia comprises four types of biomes, 32 ecological regions, and 199 ecosystems. Within this geographic area there are several natural parks and reserves such as the Noel Kempff Mercado National Park, the Madidi National Park, the Tunari National Park, the Eduardo Avaroa Andean Fauna National Reserve, and the Kaa-Iya del Gran Chaco National Park and Integrated Management Natural Area, among others.

Bolivia has gained global attention for its 'Law of the Rights of Mother Earth', which accords nature the same rights as humans. W

Comunidad Inti Wara Yassi is a non-governmental organization dedicated to environmental education and the care of sick, mistreated and abandoned wildlife. Based and operated in Bolivia, it is the country's largest single destination for confiscated wildlife, though due to space limitations they are unable to accept all. The organization also carries out environmental activism and educational roles, focusing on animal rights and conservation. The name comprises words from three indigenous languages meaning sun, star and moon in the Quechua, Aymara and Chiriguano Guaraní languages.

The organization is supported by international volunteers that stay for a minimum of two weeks. Volunteers care for animals, clean and build cages and prepare food. W

In Cochabamba, Bolivia, the lack of water has caused conflicts for decades. In 1999, Cochabamba's public water supplier, SEMAPA, was leased to the international consortium Aguas del Tunari. The major shareholder of the consortium was the multinational company Bechtel. In the course of the privatization procedures, independent water and irrigation systems and autonomous water services were threatened with expropriation. Water prices rose steeply as a result. In response, several civil society groups formed the "Coordinadora de Defensa del Agua y de la Vida" (Coalition for the Defense of Water and Life). Protests against these policies were fierce, lasted several months, and raised the issue to national and international levels.

Eventually, Aguas del Tunari was expelled. Control of SEMAPA was transferred to representatives from the municipality, the trade union, and the Coordinadora (though these arrangements have subsequently changed). The statutes of the hybrid company were rewritten in a challenging participatory process, but SEMAPA is still known for its lack of efficiency and transparency. Moverover, the state is currently trying to extend its sphere of control into the water sector. However, the so-called Cochabamba Water War contributed to major changes in Bolivia's water sector, the respective laws, the establishment of a national Ministry of the Environment and Water, and of the country as a whole.

Sustainability and public participation are declared to be the responsibility of the state as well as universal access to water. To which extent these intentions will actually be reflected in reality remains to be seen, however. The responsibilities coming with this basic-rights approach demand action by the state and challenge community management at the same time.[1]

Law of the Rights of Mother Earth (Spanish: Ley de Derechos de la Madre Tierra) is a Bolivian law (Law 071 of the Plurinational State), that was passed by Bolivia's Plurinational Legislative Assembly in December 2010. This 10 article law is derived from the first part of a longer draft bill, drafted and released by the Pact of Unity by November 2010. The full bill remains on the country's legislative agenda.

The law defines Mother Earth as "a collective subject of public interest," and declares both Mother Earth and life-systems (which combine human communities and ecosytems) as titleholders of inherent rights specified in the law. The short law proclaims the creation of the Defensoría de la Madre Tierra a counterpart to the human rights ombudsman office known as the Defensoría del Pueblo, but leaves its structuring and creation to future legislation. W

Bolivia To Be Completely Food Independent In 2020 By Investing In Small Farmers...[3]

How One Urban Activist Community in Bolivia Thrives on 'Abundance For Everybody', Jul 5[4]

Bolivia submits Cochabamba Conference outcome to UNFCCC,[8] April 30. The Bolivian submission incorporates the main content of a "Peoples Agreement" and a draft proposal for a "Universal Declaration of Mother Earth's Rights" that were adopted at the Cochabamba Conference.

The concept of "Living Well" - a Bolivian viewpoint, Bolivia delegation at the UN,[9] April 20

Bolivia: water shortages due to melting glaciers. The disappearance of glaciers in the Bolivian Andes Mountains is causing a concern because the future water shortages will affect the availability of suitable drinking water for a vulnerable migrant population.[11] November 2

A land-use survey conducted in 2001 found a 6 percent loss of primary forest over the previous two decades. Even with this encroaching desertification, however, forests still cover more than 50 percent of Bolivian territory. Bolivia's history of slash-and-burn agriculture, overgrazing, and industrial pollution has caused significant concern among environmentalists. Soil erosion, made worse by seasonal flooding, and contaminated water supplies are Bolivia's most pressing environmental problems. The National Service for Protected Areas, established in 1998, currently manages 21 protected areas. W

Deforestation in upper river basins has caused environmental problems, including soil erosion and declining water quality. An innovative project to try and remedy this situation involves landholders in upstream areas being paid by downstream water users to conserve forests. The landholders receive $20 to conserve the trees, avoid polluting livestock practices, and enhance the biodiversity and forest carbon on their land. They receive $30, which purchases a beehive, to compensate for conservation for two hectares of water-sustaining forest for five years. Honey revenue per hectare of forest is $5 per year, so within five years, the landholder has sold $50 of honey. The project is being conducted by Fundación Natura Bolivia and Rare Conservation, with support from the Climate & Development Knowledge Network. W

Page data
Retrieved from "https://www.appropedia.org/w/index.php?title=Bolivia_community_action&oldid=662806"
Cookies help us deliver our services. By using our services, you agree to our use of cookies.
Categories:
About Appropedia · Policies · Contact · Content is available under CC-BY-SA-4.0 unless otherwise noted.