From Appropedia
Redirected from Bogotá 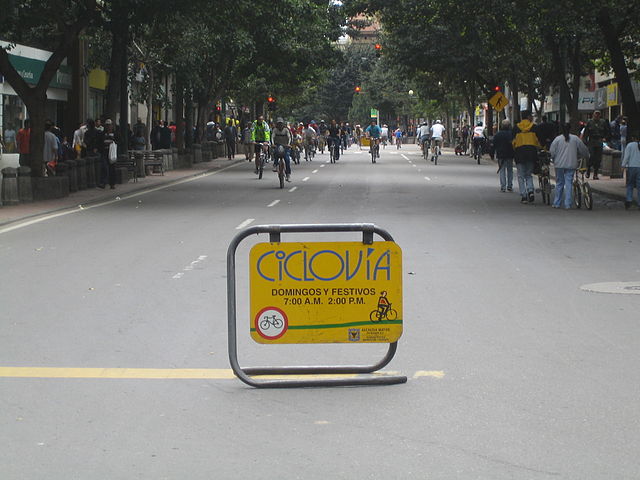 Bogotá is the capital and largest city of Colombia. The city is located in the center of Colombia, on a high plateau known as the Bogotá savanna, part of the Altiplano Cundiboyacense located in the Eastern Cordillera of the Andes. Bogotá is the third-highest capital in South America and in the world after Quito and La Paz, at an average of 2,640 meters (8,660 ft) above sea level. Subdivided into 20 localities, Bogotá has an area of 1,587 square kilometers (613 square miles) and a relatively cool climate that is constant through the year. W

From Wikipedia:Bogotá § Parks and recreation

There are numerous parks in Bogotá, many with facilities for concerts, plays, movies, storytellers and other activities. 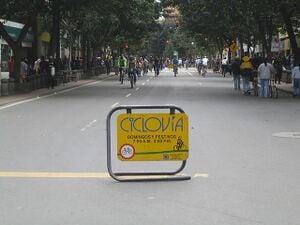 The design of the network was made taking into consideration the morphology and topography of the city. This is, from north to south the city has a flat topography and from east to west the city has varying degrees of inclination.

A mesh concept was applied for the theoretical plan of the network because it presented greater versatility and adaptation given that the road network was designed as a grid plan with streets going from south to north and from east to west.The network was also integrated with the TransMilenio bus system which has bicycle parking facilities.

TransMilenio is a bus rapid transit (BRT) system that serves Bogotá, the capital of Colombia, and Soacha. The system opened to the public in December 2000, covering Caracas Avenue and 80 street. Other lines were added gradually over the next several years, and as of 2022, 12 lines totalling 114.4 km (71 mi) run throughout the city. It is part of the city's Integrated Public Transport System (Sistema Integrado de Transporte Público [SITP] in Spanish), along with the urban, complementary and special bus services operating on neighbourhoods and main streets.

It was inspired by Curitiba's Rede Integrada de Transporte (Integrated Transportation Network). TransMilenio consists of several interconnected BRT lines, with raised floor stations in the center of a main avenue, or "troncal". Passengers typically reach the stations via a bridge over the street. Usually four lanes down the center of the street are dedicated to bus traffic. The outer lanes allow express buses to bypass buses stopped at a station.

Users pay at the station entrance using a smart card, pass through a turnstile, and wait for buses inside the station, which is typically 5 m wide. The bus and station doors open simultaneously, and passengers board by simply walking across the threshold. The elevated station platform and the bus floor are at the same height.

At the end of 2018 Transmilenio ordered 1383 new buses as a replacement of the older ones in service. 52% were compressed natural gas (CNG) buses made by Scania with Euro 6 emission rating, 48% are diesel engine made by Volvo with Euro 5 emission rating. More orders have produced an impressive result: "To improve public and environmental health, the City of Bogotá has assembled a fleet of 1,485 electric buses for its public transportation system—placing the city among the three largest e-bus fleets outside of China."

Pico y placa Literally 'Peak and Plate' (Spanish for peak [hour] and [license] plate") is a driving restriction policy aimed to mitigate traffic congestion. The scheme was initially set in place in Bogotá, Colombia, in 1998, by then mayor Enrique Peñalosa to help regulate traffic during rush hours. The system restricts traffic access into a pre-established urban area for vehicles with license plate numbers ending in certain digits on pre-established days and during certain hours. Initially the system restricted traffic between 6 and 9 am, and between 5 and 8 pm, Monday through Friday.

The scheme restricts both private and public use vehicles based on the last digit of the licence plate numbers. Four numbers are restricted every day for private use vehicles, and two for public transportation vehicles. The restricted digits associated to each day rotate every year. Schemes with the same name have been implemented in other Colombian cities, such as Medellín and Cúcuta; and also in Quito, Ecuador's capital city.

Improving life in Bogota by empowering citizens to cycle, September 23[2]

Page data
Retrieved from "https://www.appropedia.org/w/index.php?title=Bogotá_community_action&oldid=662636"
Cookies help us deliver our services. By using our services, you agree to our use of cookies.
Categories:
About Appropedia · Policies · Contact · Content is available under CC-BY-SA-4.0 unless otherwise noted.