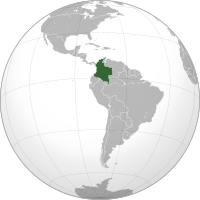 Colombia, officially the Republic of Colombia, is a constitutional republic in northwestern South America. Colombia is bordered to the east by Venezuela and Brazil; to the south by Ecuador and Peru;to the north by the Caribbean Sea; to the northwest by Panama; to the west by the Pacific Ocean; and to the east by Venezuela. Colombia also shares maritime borders with Venezuela, Jamaica, Haiti, the Dominican Republic, Honduras, Nicaragua and Costa Rica.With a population of over 45 million people, Colombia has the 29th largest population in the world and the second largest in South America, after Brazil.The territory of what is now Colombia was originally inhabited by indigenous nations including the Muisca, Quimbaya, and Tairona.

The articles (and subcategories) below list various projects done in, programs and organizations operating in, writings about and resources for Colombia.

The following 3 pages are in this category, out of 3 total.