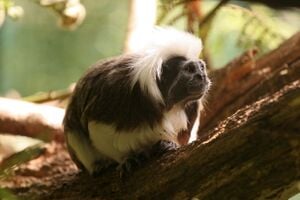 Cotton-top Tamarin in Colombia. Rights for this image provided by morguefile.com
Project data

Proyecto Titi is the name of an environmental program centered in Colombia with a special focus on the conservation of a critically endangered primate species endemic to the country, the Cotton-top Tamarin (Saguinus oedpipus). Due mainly to destruction of forest habitat and human colonization, the population of Cotton-top Tamarins has reached devastatingly low numbers in recent years. Proyecto Titi, which was founded in 1985, aims to bring awareness to the plight of the Cotton-top Tamarin through community education programs that focus on sustainability, as well as by encouraging field research studies that would hopefully allow us to better understand these secretive primates and protect the greater Colombian ecosystem as a whole.[1]

A Closer Look at the Program[edit | edit source]

Proyecto Titi aims to achieve conservation goals for the Cotton-top Tamarin through various sustainable practices that benefit not only the wildlife but the fragile Colombian ecosystem as a whole. One of these is through the creation of an environmentally-friendly bag called an Eco-Mochila. Eco-Mochilas are colorful, reusable bags made from regular plastic bags and other garbage that litters much of the remaining forest habitat of the Cotton-top Tamarin. One Colombian village in particular with no formal method of garbage collection, Los Limites, realized the benefits Eco-Mochilas and now has seen a great reduction in trash.[2] Additionally, by purchasing Eco-Mochilas through the conservation program's website, people anywhere can help provide Colombian villagers with an income, which decreases their dependency on forest resources, which in turn ultimately benefits the tiny primates themselves. [3]

The overuse of forest resources presents a serious threat to Colombia's natural environment and in particular the Cotton-top Tamarin. People from the Proyecto Titi organization are attempting to combat this problem by introducing villagers to a new, more sustainable way to burn fires for cooking. The group has introduced bindes to many villages, small, clay, stove-type structures that burn wood much more efficiently than by traditional means and produce considerably less smoke.[4] The hope is that the binde will help decrease the heavy use of non-sustainable forest resources as well as help in the improvement of economic conditions.

People involved with Proyecto Titi have played an integral role in spreading awareness of important issues facing the Colombian ecosystem and wildlife. Educating students in the region has proven particularly successful and this group has helped young people focus their attention on everything from poaching concerns to local water health and pollution. "Channeling community concern, we developed a program to monitor the long-term health of the watersheds in the village of Colosó. Students in Colosó adopted a monitoring site near their school. Each month, students conducted standardized tests (nitrates, dissolved oxygen, temperature, pH, fecal coliform, chloride, total solids, hardness, turbidity) to examine the quality of the water consumed by the communities. Using the data they collected, they began to consider ways to improve the quality of the water they consumed."[5] These studies ultimately help both villagers and native wildlife. The program also runs a Facebook page which allows for greater attention to the plight of Tamarins as well as another means for "local community advocates to promote conservation efforts in Colombia." [6]

According to the ICUN Red List of Threatened Species, the current population estimate of Cotton-top Tamarins stands at 6,000 with only 2,000 of those individuals being mature adults. The pressures associated with deforestation, poaching, and colonization are believed most responsible for the decline of the species.[7]