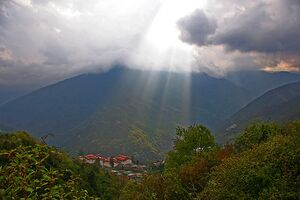 Bhutan ( (listen); Dzongkha: འབྲུག་ཡུལ་, romanized: Druk Yul [ʈuk̚˩.yː˩]), officially the Kingdom of Bhutan, is a landlocked country in South Asia. It is situated in the Eastern Himalayas, between China in the north and India in the south. A mountainous country, Bhutan is known as "Druk Yul," or "Land of the Thunder Dragon". Nepal and Bangladesh are located near Bhutan but do not share a land border. The country has a population of over 727,145 and territory of 38,394 square kilometres (14,824 sq mi) and ranks 133rd in terms of land area and 160th in population. Bhutan is a Constitutional Democratic Monarchy with King as head of state and Prime Minister as head of government. Mahayana and Vajrayana Buddhism is the state religion and Je khenpo is the head of state religion.

The subalpine Himalayan mountains in the north rise from the country's lush subtropical plains in the south. In the Bhutanese Himalayas, there are peaks higher than 7,000 metres (23,000 ft) above sea level. Gangkhar Puensum is Bhutan's highest peak and is the highest unclimbed mountain in the world. The wildlife of Bhutan is notable for its diversity, including the Himalayan takin. The capital and largest city is Thimphu.

In 2020, Bhutan ranked third in South Asia after Sri Lanka and the Maldives in the Human Development Index. Bhutan is also a member of the Climate Vulnerable Forum, the Non-Aligned Movement, BIMSTEC, the IMF, the World Bank, UNESCO and the World Health Organization (WHO). Bhutan ranked first in SAARC in economic freedom, ease of doing business, peace and lack of corruption in 2016. Bhutan has one of the largest water reserves for hydropower in the world. Melting glaciers caused by climate change are a growing concern in Bhutan.

In an effort to further spread the use of renewable energy and to decrease the country's carbon emissions, Bhutan also provides free electricity to rural farmers; this reduces the amount of fires/gas they use to do their farm work. The government also subsidizes LED light bulbs and electric vehicles.

In a 2016 TED Talk, the Bhutanese Prime Minister Tshering Tobgay spoke about how Bhutan is the only country able to claim the title of "carbon negative." This means that though the nation produces about 2.2 million tons of CO2 , the forests offset more than 4 million tons of CO2. They are able to do this because over 72% of their country is under the cover of their forests, a constitutional mandate of the nation.

From Wikipedia:Renewable energy in Bhutan § Goals and commitments

At the 2009 United Nations Climate Change Conference, Bhutan made their first promise to remain carbon neutral; they again made this promise at the 2015 United Nations Climate Change Conference. As of 2016, the clean energy Bhutan exported offset roughly 6 million tons of CO2; it is their goal to export enough clean energy to offset 17 million tons of carbon dioxide by 2020. In his 2016 TED Talk, Prime Minister Tshering Tobgay stated that if Bhutan was able to harness even half of the potential hydroelectric power, they would be able to offset roughly 50 million tons of carbon dioxide, more than the carbon dioxide that New York City produces in one year.

According to the Swiss-based International Union for Conservation of Nature, Bhutan is viewed as a model for proactive conservation initiatives. The Kingdom has received international acclaim for its commitment to the maintenance of its biodiversity. This is reflected in the decision to maintain at least sixty percent of the land area under forest cover, to designate more than 40% of its territory as national parks, reserves and other protected areas, and most recently to identify a further nine percent of land area as biodiversity corridors linking the protected areas. All of Bhutan's protected land is connected to one another through a vast network of biological corridors, allowing animals to migrate freely throughout the country. Environmental conservation has been placed at the core of the nation's development strategy, the middle path. It is not treated as a sector but rather as a set of concerns that must be mainstreamed in Bhutan's overall approach to development planning and to be buttressed by the force of law. The country's constitution mentions environmental standards in multiple sections.

Royal Society for the Protection of Nature[edit | edit source]

From Wikipedia:Royal Society for the Protection of Nature, Bhutan

From Wikipedia:Royal Society for the Protection of Nature, Bhutan § Activities

The RSPN is active in research and conservation of endangered species. RSPN has been working in Phobjika Valley, Wangdue Phodrang District, home to the endangered black-necked crane (Grus nigricollis) for over two decades to conserve the black necked crane and at the same time to promote sustainable livelihoods of the people there. This valley contains wildlife corridors connecting Jigme Singye Wangchuck National Park with other protected areas of Bhutan, however most of the area is not under official government protection. To meet the environmental and social needs, RSPN initiated projects to promote sustainable ecotourism, alternative energy, and gender and water, waste management, wetland conservation, organic farming, income generating options such as souvenir making and in the conservation of forest resources in close collaboration with the Department of Forest and Park Services.RSPN extended its program to Wamrong and Kangpara communities in Trashigang District and in Zhemgang District focused to community based natural resource management and sustainable livelihoods of the people.

Under the Environmental Education and Advocacy Program, the RSPN is a collaboration with the Ministry of Education established school based nature club in all the schools across the country. Nature clubs are active in creating environmental awareness in the school and in communities around. To support nature club program, RSPN developed and distributed a nature club activity manual and nature club management guide books. Over 1,000 teachers were trained to manage nature club activities in schools. In consultation with the Royal University of Bhutan, the RSPN introduced environmental studies modules in the teacher training colleges of Samtse and Paro. RSPN also extended its environmental education program to the monastic schools. Environmental education materials were developed and monks and nuns were trained to conduct conservation activities.

From Wikipedia:List of protected areas of Bhutan

From Wikipedia:Forestry in Bhutan § Conservation

The small population and the general absence of overdevelopment in Bhutan contributed to forest preservation. Because of the terrain, the more accessible forests had been overcut whereas remote forests remained largely in their natural state. A progressive government-sponsored forestry conservation policy strove to balance revenue needs with ecological considerations, water management, and soil preservation. Success in managing its forest resources had long been critical to the local environment and economy and also affected downstream floodplains in India and Bangladesh.

From Wikipedia:Forestry in Bhutan § Conscientious Forestry

Before hydroelectric power and other modern energy sources were available, wood was the almost exclusive source of fuel for heating, cooking, and lighting. The provision of electricity, as well as better regulation of fuelwood collectors and more aggressive reforestation projects, was seen in the 1980s as a key factor in forest conservation. Because affordable electricity was not available throughout the country, the government established fuelwood plantations near villages to accommodate daily needs and to promote forest conservation.

From Wikipedia:Forestry in Bhutan § Banning & Standards

After the 2015 United Nations Climate Change Conference, Bhutan has been moving towards other forms of renewable energy so as to decrease their reliance on hydroelectric power during winter and dry months. Bhutan has increased their focus specifically in the areas of: windmills, biogas plants, solar power, and smaller hydropower plants.

From Wikipedia:Energy in Bhutan § Solar Energy

As of 2015 there are approximately 4,600 solar power systems operating in Bhutan, with 2,750 on-grid systems and 1,848 off-grid systems. The development potential is estimated at around 12,000 megawatts.

GNH is distinguishable from Gross Domestic Product by valuing collective happiness as the goal of governance, by emphasizing harmony with nature and traditional values as expressed in the 9 domains of happiness and 4 pillars of GNH. According to the Bhutanese government, the four pillars of GNH are:

The nine domains of GNH are psychological well-being, health, time use, education, cultural diversity and resilience, good governance, community vitality, ecological diversity and resilience, and living standards. Each domain is composed of subjective (survey-based) and objective indicators. The domains weigh equally but the indicators within each domain differ by weight.

This is the world's first carbon negative country, Oct 31[1]

Bhutan most 'carbon negative' country in the world, December 4[3]

Purpose of environmentalism, (in relation to Bhutan),[5] November 5

From Wikipedia:Environmental issues in Bhutan

There are a number of environmental issues in Bhutan. Among Bhutan's most pressing issues are traditional firewood collection, crop and flock protection, and waste disposal, as well as modern concerns such as industrial pollution, wildlife conservation, and climate change that threaten Bhutan's population and biodiversity. Land and water use have also become matters of environmental concern in both rural and urban settings. In addition to these general issues, others such as landfill availability and air and noise pollution are particularly prevalent in relatively urbanized and industrialized areas of Bhutan. In many cases, the least financially and politically empowered find themselves the most affected by environmental issues.

Within the Bhutanese government, the independent National Environment Commission (NEC) and Bhutan Trust Fund, as well as the executive Ministries of Health (for chemical and radioactive waste), Economic Affairs, and Agriculture and Forests (Department of Forestry Services) are tasked with addressing environmental issues. Waste disposal issues often fall to local governments, Bhutan's dzongkhags and thromdes. Non-governmental agencies active in addressing environmental issues in Bhutan are the Royal Society for the Protection of Nature (RSPN), the only domestic environmental NGO, and the World Wildlife Fund (WWF).

Page data
Retrieved from "https://www.appropedia.org/w/index.php?title=Bhutan_community_action&oldid=656414"
Cookies help us deliver our services. By using our services, you agree to our use of cookies.
Categories:
About Appropedia · Policies · Contact · Content is available under CC-BY-SA-4.0 unless otherwise noted.