From Appropedia
Redirected from Arizona 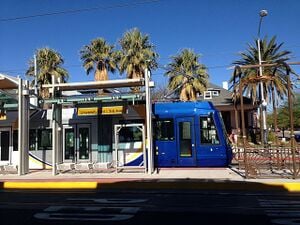 Arizona ( (listen) AIR-iz-OH-nə; Navajo: Hoozdo Hahoodzo Navajo pronunciation: [hoː˥z̥to˩ ha˩hoː˩tso˩]; O'odham: Alĭ ṣonak) is a state in the Western United States, grouped in the Southwestern and occasionally Mountain subregions. It is the 6th largest and the 14th most populous of the 50 states. Its capital and largest city is Phoenix. Arizona shares the Four Corners region with Utah to the north, Colorado to the northeast, and New Mexico to the east; its other neighboring states are Nevada and California to the west and the Mexican states of Sonora and Baja California to the south and southwest.

Cycling is popular in Tucson. Tucson and Pima County maintain an extensive network of marked bike routes, signal crossings, on-street bike lanes, mountain-biking trails, and dedicated shared-use paths. The Loop is a network of seven linear parks comprising over 100 mi (160 km) of paved, vehicle-free trails that encircles the majority of the city with links to Marana and Oro Valley. The Tucson-Pima County Bicycle Advisory Committee (TPCBAC) serves in an advisory capacity to local governments on issues relating to bicycle recreation, transportation, and safety. The League of American Bicyclists awarded Tucson a gold rating for bicycle-friendliness in 2006.

Tucson is well known for its Rillito River bike path which local citizens refer to as "The Loop." Built mainly along the river beds of Tucson, the Rillito bike path has 131 miles of paths that link Tucson to its neighboring communities, including Oro Valley.

Sun Link, also known as the Tucson Streetcar, is a single-line streetcar system in Tucson, Arizona, United States, that began service in July 2014. The system's 3.9-mile (6.3 km) route connects the Arizona Health Sciences Center (including University Medical Center), the University of Arizona campus, the Main Gate and 4th Avenue shopping and entertainment districts, downtown Tucson, the Tucson Convention Center, and the Mercado District under development west of Interstate 10. The streetcar project's overall cost of $196 million was met through a combination of local funding sources and federal grants. The streetcar shares a common payment system with the Sun Tran regional bus service.

From Arcosanti[edit]
Arcosanti is "an urban laboratory focused on pursuing lean alternatives to urban sprawl through innovative design with environmental accountability." The philosophy is one of "Arcology" - architecture plus ecology.