The concept of a photovoltaic solar thermal hybrid (PVT) has been around for over 30 years. However, due to the low efficiencies of the photovoltaic solar cell, PV/T were not economically feasible. In the past decade, PV/T has started to grow and this can be seen with the International Energy Association (IEA) Task 35 which is specifically on PV/T.[1]

The idea behind a PV/T system is to cool the photovoltaic (PV) solar panel with a coolant, usually water or air, and then use the excess heat to be used to heat up a water tank or a preheat for a house. It should be noted that photovoltaic solar cell output decreases with an increase in cell temperature above STC of 25 C.[2] For this reason a PV/T is quite interesting because it will allow an increase in the photovoltaic cell efficiency as well as use the heat emitted from the cell. It should be also noted that the absorber of a solar thermal system likes to be hot since the greater the temperature difference from the coolant and the absorber, the greater the heat transfer. So the design of an optimized PV/T is non-trivial.

Typically, in a PV/T system the absorber is the PV which causes a problem since the PV cells like to be cool and the absorber like to be hot. In the current literature, the design is to cool the PV as much as possible and neglect improving the efficiency of the solar thermal collection part of the PV/T system.[3] In this research project a PV cell is being designed that works better when it is hot to therefore optimize both the PV and thermal parts of a PV/T system.

The first stage of the project was to commission the PV Measurements AAA solar simulator and QE machine. This was done and protocols were written. The more difficult step was to find a source for receiving samples and this has been the main source of delays in the project. The desire is for a thickness series ranging from 200-2000 nm.

The next step was to determine the temperature range of an absorber plate in a solar thermal flat plate collector. This was done by finding the efficiency and loss factor of systems tested at SRCC and back calculating. It was found that the temperatures ranged from low 40s to 130 C depending on the system and the coolant used. The exact temperatures for the test are still being decided. One debate is whether to test the cells at stagnation temperatures (180 C). Furthermore, IEC 60904 standards are coming to ensure the testing matches requirements.

Once the testing has been sorted out and the samples arrive, the first step is to complete IV and QE tests on all the cells to determine their initial properties. The next step will be to test the various thicknesses and temperatures and degrade the cells until they stabilize. After stabilization, another QE test will be completed. Macros will be created and employed to speed up the data analysis.

While this testing is being completed D-AMPS modelling of the cells will be undertaken to determine the characteristics of the cells as they degrade. Once all the tests have been completed and a thickness and has been chosen to be the best, the cell maybe be tested under real life situations to determine if fluctuating temperatures and irradiance affect the stabilization.

Abstract
There is a renewed interest in photovoltaic solar thermal (PVT) hybrid systems, which harvest solar energy for heat and electricity. Typically, a main focus of a PVT system is to cool the photovoltaic (PV) cells to improve the electrical performance, however, this causes the thermal component to under-perform compared to a solar thermal collector. The low temperature coefficients of amorphous silicon (a-Si:H) allow for the PV cells to be operated at higher temperatures and are a potential candidate for a more symbiotic PVT system. The fundamental challenge of a-Si:H PV is light-induced degradation known as the Staebler-Wronski effect (SWE). Fortunately, SWE is reversible and the a-Si:H PV efficiency can be returned to its initial state if the cell is annealed. Thus an opportunity exists to deposit a-Si:H directly on the solar thermal absorber plate where the cells could reach the high temperatures required for annealing.

In this study, this opportunity is explored experimentally. First a-Si:H PV cells were annealed for 1 hour at 100C on a 12 hour cycle and for the remaining time the cells were degraded at 50C in order to simulate stagnation of a PVT system for 1 hour once a day. It was found that, when comparing the cells after stabilization at normal 50C degradation, this annealing sequence resulted in a 10.6% energy gain when compared to a cell that was only degraded at 50C. 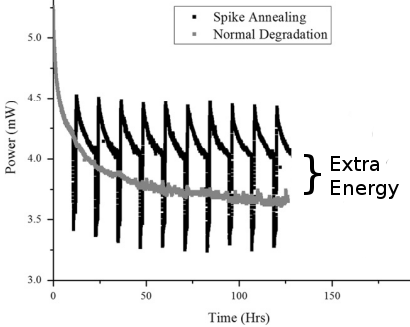 Normal degradation at PV operating temperatures vs spike annealing in a PVT. The electrical performance of the a-Si-based PV in the PVT is 10% better than in standard PV

Historically, the design of hybrid solar photovoltaic thermal (PVT) systems has focused on cooling crystalline silicon (c-Si)-based photovoltaic (PV) devices to avoid temperature-related losses. This approach neglects the associated performance losses in the thermal system and leads to a decrease in the overall exergy of the system. Consequently, this paper explores the use of hydrogenated amorphous silicon (a-Si:H) as an absorber material for PVT in an effort to maintain higher and more favourable operating temperatures for the thermal system. Amorphous silicon not only has a smaller temperature coefficient than c-Si, but also can display improved PV performance over extended periods of higher temperatures by annealing out defect states from the Staebler-Wronski effect. In order to determine the potential improvements in a-Si:H PV performance associated with increased thicknesses of the i-layers made possible by higher operating temperatures, a-Si:H PV cells were tested under 1 sun illumination (AM1.5) at temperatures of 25oC (STC), 50oC (representative PV operating conditions), and 90oC (representative PVT operating conditions). PV cells with an i-layer thicknesses of 420, 630 and 840 nm were evaluated at each temperature. Results show that operating a-Si:H-based PV at 90oC, with thicker i-layers than the cells currently used in commercial production, provided a greater power output compared to the thinner cells operating at either PV or PVT operating temperatures. These results indicate that incorporating a-Si:H as the absorber material in a PVT system can improve the thermal performance, while simultaneously improving the electrical performance of a-Si:H-based PV.

Stories about a-Si PVT in the Press[edit | edit source]