From Appropedia
Redirected from Zoning 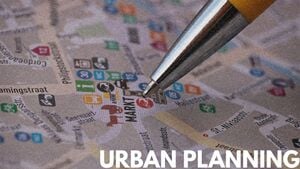 Urban planning, also known as town planning, city planning, regional planning, or rural planning, is a technical and political process that is focused on the development and design of land use and the built environment, including air, water, and the infrastructure passing into and out of urban areas, such as transportation, communications, and distribution networks and their accessibility. Traditionally, urban planning followed a top-down approach in master planning the physical layout of human settlements. The primary concern was the public welfare, which included considerations of efficiency, sanitation, protection and use of the environment, as well as effects of the master plans on the social and economic activities. Over time, urban planning has adopted a focus on the social and environmental bottom-lines that focus on planning as a tool to improve the health and well-being of people while maintaining sustainability standards. Sustainable development was added as one of the main goals of all planning endeavors in the late 20th century when the detrimental economic and the environmental impacts of the previous models of planning had become apparent. Similarly, in the early 21st century, Jane Jacob's writings on legal and political perspectives to emphasize the interests of residents, businesses and communities effectively influenced urban planners to take into broader consideration of resident experiences and needs while planning.

Urban planning has important implications for sustainability, as well as for quality of life. Street layout, housing layout and population density and affect energy use for heating, cooling and transport. Building regulations also affect sustainability, by encouraging or discouraging efficient design.

A checklist of some of the issues that must be considered in urban planning, when developing or implementing a policy or design:

According to Duany and Plater-Zyberk, the heart of New Urbanism is in the design of neighborhoods, which can be defined by thirteen elements: 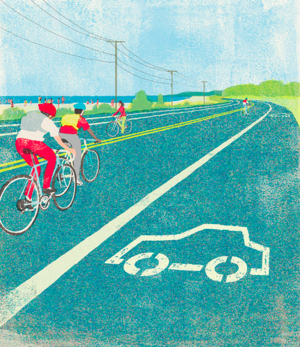 Car-free places, or pedestrian zones, are an essential part of a city - not only for sustainable city living, but to create a peaceful, desirable place to be. In these areas, some or all automobile traffic is prohibited.

Other types of zones, i.e. mixed zones[verification needed] allow vehicles, but they must negotiate their way with pedestrians, making a different kind of place from traditional roads.

Land left untouched, or with tended grass and other plants, enriches a city, provides habitat for animals, helps to control the natural water cycle, and helps to moderate temperatures (partly by reducing the urban heat island effect).

On a larger scale, restrictions on development in green belts help to protect the environment, prevent poorly planned urbanization, and provide a refuge for animals that may be endangered due to human activity.

Usable public space is an important aspect of urban planning and Urban design, especially in those with a focus on sustainability, such as transit-oriented development and New Urbanism.

Public space, being shared, does not have to be as expansive as providing the same functionality or experience through private space. The benefits are:

To allow privacy when desired, a mix may be planned for, e.g. in cohousing, where a smaller amount of private space is in each dwelling, but a larger amount is shared by the community..

To satisfy building codes, some developers use large areas of landscaping. This is not usable space - children cannot play there, the community cannot garden there, and the lawn cannot be used for sitting, walking or playing.

Shared space in urban and residential environments offers the potential for social interaction, community, and resource-sharing, allowing the enjoyment of the resources with lower environmental impact.

They come about either through a traditional pre-car infrastructure and layout of streets and houses, or through approaches to urban design and planning that draw their inspiration from these older neighborhoods - e.g. Traditional Neighborhood DevelopmentW).

Land value capture (LVC) refers to an urban planning approach that aims to support paying for improved public infrastructure in an area by at least partially recouping the increment in land values in the area resulting from the improved infrastructure.

For example, LVC has been used to fund improvements to Public transport networks, especially heavy rail, in cities such as London, in the United Kingdom.

The Danish dense-low tradition of housing is one of no high rise apartments but rather houses of two and three stories, clustered around shared courtyards and open space. There is little emphasis on separated single-family homes.

With a population density of around 35 people per hectare this is lower than the development in most European cities, but much more compact than Auto City suburbs which are approximately 10 people per hectare.

The Fused Grid is a proposed street layout that combines elements of the grid pattern ("Smart Growth" and neo-traditional neighborhood design / New Urbanism) with the loop and curl street patterns of urban development in recent decades.

Each of those existing street patterns (grids and loops) has positive attributes yet neither satisfies all the needs of sustainability, safety (accident avoidance), living environment and quality of life.

Child Friendly Cities is a movement in urban design and planning where children are placed as important user in the city. A Child Oriented Development provide the best appropriate facilities to have children live, grow, learn and play in a good environment quality. Child Friendly Cities relate to United Nation Convention on Child Rights.

They come about either through a traditional pre-car infrastructure and layout of streets and houses, or through approaches to urban design and planning that draw their inspiration from these older neighborhoods - e.g. Traditional Neighborhood DevelopmentW).

An urban farm is an expression of urban agriculture, often a cooperative effort, and a way of creating abundance within a food desert.

Ecovillages are a kind of sustainable neighbourhood, which are typically planned and managed cooperatively. They are intended to be socially, economically and ecologically sustainable intentional communities[2][3] - though they include models that may be less intense and offer more privacy than some intentional communities. Compared to sustainable cities, they are smaller and typically aim for a population of no more than 150 individuals, which is considered to be the maximum social network according to findings from sociology and anthropology (Hill & Dunbar, 2002). However, cooperative networks of ecovillages do exist.

Ecovillage members are united by shared ecological, social or spiritual values (see Intentional community). An ecovillage is often composed of people who have chosen an alternative to centralized power, water, and sewage systems. Many see the breakdown of traditional forms of community, wasteful consumerist lifestyles, the destruction of natural habitat, urban sprawl, factory farming, and over-reliance on fossil fuels, as trends that must be changed to avert ecological disaster. They see small-scale communities with minimal ecological impact as an alternative.

Zoning is of great concern to everyone interested in intentional communities. Zoning regulations are imposed by a locality, usually a city, and control a wide range of land-use issues, including:

Living in violation of zoning is risky - keeping a low profile will only work for so long. A single complaint from a disgruntled neighbor can lead to a $1000 per day fine or even a 30 day eviction notice. The time to settle zoning issues is before the community is established.

Changing zoning can be a lengthy and expensive process. A land-use attourney is often required, and a six month process is not uncommon, leading to an extra up-front $10,000 expense, and the zoning board might still say 'No'.

Measures such as joules per person per km have been used to argue that public transport is no more efficient than transport by private cars. The flaw in this argument is that it is not measuring the important figure (i.e. how much energy is used per person).

The reason that this may give a misleading result is that it doesn't capture the various possible effects of public transport, such as shorter distances travelled (due to a more dense housing layout, and clustering of housing near transport); more walking; and the tendency of public transport users to combine their trips (e.g. shopping on the way home from work).[4] However, while these are up for debate, and of course the merits of private vs public transport can be debated, it is important to interpret data correctly, and the logical flaw in using an inappropriate measure is very clear.

One of the patterns described by Christopher Alexander, Sara Ishikawa and Murray Silverstein in their book A Pattern Language.[5] is City-Country Fingers, a "starfish" form, with interlocking fingers of farmland and urban land even at the center. The urban fingers should never be more than about 1 mile (1.6 kilometers) wide.[6] Farmer and market are brought closer together, and a "greener" level of urban density is encouraged.

Page data
Retrieved from "https://www.appropedia.org/w/index.php?title=Urban_planning&oldid=694718#Zoning"
Cookies help us deliver our services. By using our services, you agree to our use of cookies.
Categories:
Maintenance categories:
About Appropedia · Policies · Contact · Content is available under CC-BY-SA-4.0 unless otherwise noted.