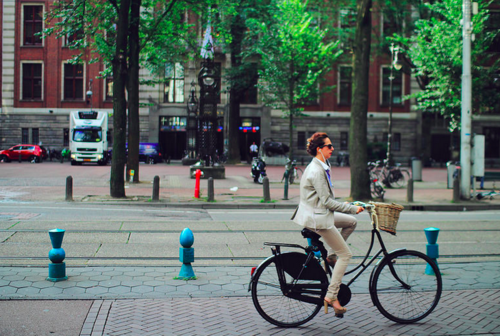 There are various ways of being carfree - as an individual or as a society; for a day, or most days, or permanently; in a small area of a city, or (as an ultimate goal) across most of a city.

Having carfree streets or sections of streets makes beautiful oases of calm in a city, town or suburb.

Even if we don't own a car, almost all of us will depend on road transport for many of the things we buy, if we have not shops in our immediate proximity - however this too can be reduced both by growing our own food (e.g. through urban agriculture), and where possible, conscious consumption.

Making industries and factories use smarter ways of transport can also save money and time. During 20th century lots of industries that relied on heavy transports constructed extensions from the railway grid into their own plot of land, to make it simpler to receive and send their freight with the train system. Perhaps it is inconvenient now for most industries and factories, but we should try to think along that same way now. To not use inappropriate methods of transport when there is ways to load/reload cargo in more appropriate existing vehicles. And perhaps make challenges to companies to invent new IT-methods and smarter ways of "piggybacking" on other vehicles to save the amount of new trucks being built, and the amount of miles that our huge trucks drive more or less half empty.

In shipping there have been lots of efforts to make engines more fuel efficient. The latest proposal i found was a huge container vessel that had mounted a large sail. It is a clever and provocative thought to go back to ancient times when we were not depending on oil, but still managed to travel around the seven seas.