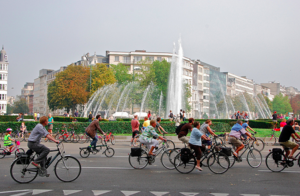 Bikes are an important feature of car-free cities.

A car-free city is an aim of a peaceful and enjoyable city, without the domination of the automobile. It is also a resilient and sustainable city. By emphasizing public transport, cycling, walking, and convenient design, the need for cars is greatly reduced.

The benefits are reduced oil dependence, air pollution, carbon emissions, automobile crashes, and the positive benefits of a more quiet peaceful environment (less noise), more usable open space, and much greater freedom for pedestrians and cyclists - all leading to a greater quality of life. Some cities have car-free places already, but a car-free city will require a much more serious commitment, political will and community support. prohibited,

Older cities that began before the automobile (the established cities of Europe, Asia, and Africa) often continue to have carfree areas in the oldest parts of the city. Areas which began as slums may retain their narrow streets even after houses have improved and services are connected, and thanks to their narrow streets remain quiet and car-free (apart from the occasional motorcycle).

The Carfree Cities movement connects people from around the world working towards these goals and developing practical alternatives to car dependence.

A key step taken is to create car-free places (carfree places within cities), and create awareness and familiarity with the concept, as well as to allow residents to experience the benefits of being car-free.

Such steps may be initiated within government, or proposed and lobbied by NGOs and other representatives of civil society.

A more rigorous approach then to just create car-free places is to make the whole city carfree. This can be done by implementing physical barriers as F-shape barriers and bollards would be placed at the edge of the city and would still permit passage to the city for 2-wheeled vehicles, but deny it for 3- and 4-wheeled ones. To still allow passage for 3-wheeled vehicles (and the occasional 4-wheeled one), provisions as retractible bollards[1] (which may be opened only by certain people) can be placed.

The system would also be enforced by law by implementing a law that states that "all human-controlled, 4-wheeled vehicles intented for private use, are banned within city centres.

Outside the cities, 4-wheeled vehicles and cars would not yet be banned by law untill further notice, and parking spaces would be set-up at the edge of town to provide people the further use of their car and allow them to phase it out gradually.

At the moment, cars and roads can (largely) be eliminated and replaced by a combination of

City-to-city transportation would rely on the following vehicles/modes of transportation: by airways: regular communal airplanes, the new airships, personal air vehicles (PAV) by waterways: communal and personal boats and other water vehicles and by railways: trains travelling in non-eco-fragile environments or travelling underground