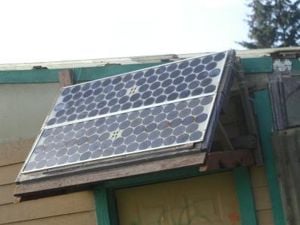 As a student in Lonny's Engr. 305 class, I carried out a project that involved troubleshooting, repairing, testing and maintaining a preexisting off-grid photovoltaic system located at the Arcata Educational Farm, on Old Arcata road, Arcata, CA. This project was carried out over the 2009 spring semester. The goal of the project is to provide AEF with a renewable source of off-grid electricity. The electricity powers an answering machine and a portable stereo system for the enjoyment of the farmers. The AEF provided a binder full of literature on the photovoltaic system; including operating manuals for the inverter, charge controller, and answering machine, as well as troubleshooting guidelines and performance monitoring checklists. These papers as well as additional technical literature provided the basis for the troubleshooting process. The previous system used a single panel and powered both the answering machine, and a fan for the disassembled compost toilet. This project involved adding an additional panel in parallel to the original system, providing additional power. This Project Involves

The first step was to collect as much information as possible about the preexisting system from AEF. This includes manuals for system components, individual opinions about could be wrong with the system, as well as any existing literature written on by other students who had previously worked on the photovoltaic system.

Safety is a crucial aspect of working on electrical systems. The following precautions were taken while working on the photovoltaic system.

By adding an additional panel, the system provides more power and is useable for a wider array of applications. By having two panels in parallel, their output voltage remains equal, however the current is the sum of both the panels’ individual currents. 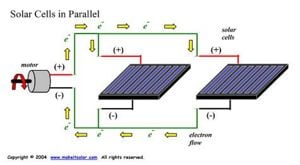 It is important to remember that magnetic south is not the same as true south. A compass aligns with the earth’s magnetic field, which is not necessarily aligned with the earth’s rotational axis. This magnetic declination from true south is known as the azimuth, and varies depending on specific location. The optimal tilt occurs when the panels are oriented perpendicular to the suns rays. The highest average insolation will fall on a panel with a tilt angle equal to the latitude of that specific area. (Arcata has a latitude and longitude of 40.98 by 124.1.) By using the chart below, the best orientation the panels is determined to be about 17 degrees east of magnetic south, with a 41 degree tilt. (year round loads should have a tilt angle equal to the latitude of that location.) 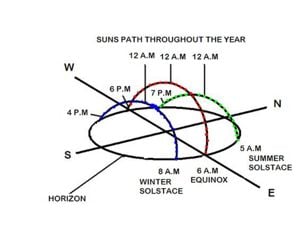 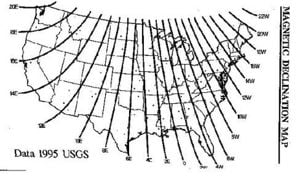 The main parts of the photovoltaic system include the charge controller, circuit breaker, inverter, and battery. The operating manuals of inverter, charge controller, and answering machine provide more specific information such as performance limits which are used to size the system. 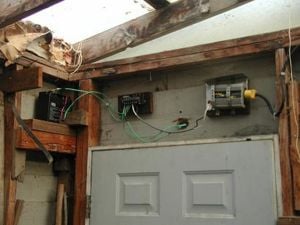 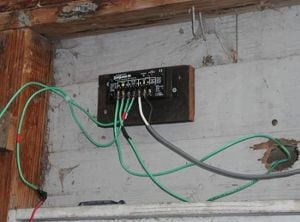 The photovoltaic control is a voltage regulator. 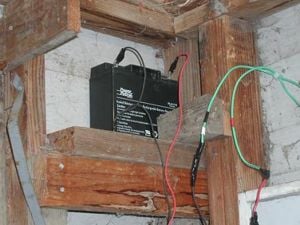 Batteries store direct current electrical energy in chemical form for later use. In a photovoltaic system, the energy is used at night or during cloudy or rainy weather. 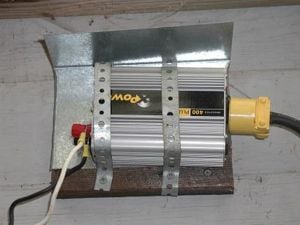 Inverters take DC current electricity and convert it to the AC electricity commonly used by appliances.

Below is a table of the Xantrex Xpower400 inverter Inverters technical specifications.

Photovoltaic panels consist of semiconductor wafers beneath a sheet of glass. The panels in this system were manufactured by Solar International Inc. They were originally rated at 20 watts, and due to wear and tear they now produce around 18.5 watts.

The previous photovoltaic system powered an answering machine and a fan for the composting toilet, however the compost toilet is no longer in use. After asking various people involved with the AEF what electrical appliances would be most useful on the farm they mentioned the need for a radio.

The battery is more likely to be fully charged when the sun goes down and power must be provided throughout the night for the answering machine.

To size the photovoltaic system requires these basic steps:

It is important to note that while this approach sizes the system around the energy demand of the loads, the sizing of the AEF system was constrained within the parameters of the pre existing components of the system. The cost of having AEF buy completely new components to get optimum system performance would outweigh the overall benefit of the project. Actual performance of the system is found in the testing & infrastructure section. 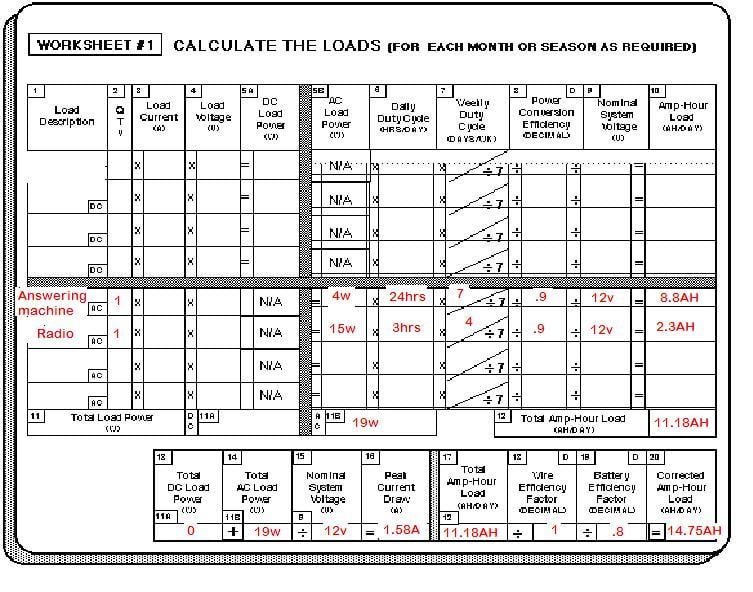 Fig.9: worksheet 1. This is the estimated weekly usage of the system 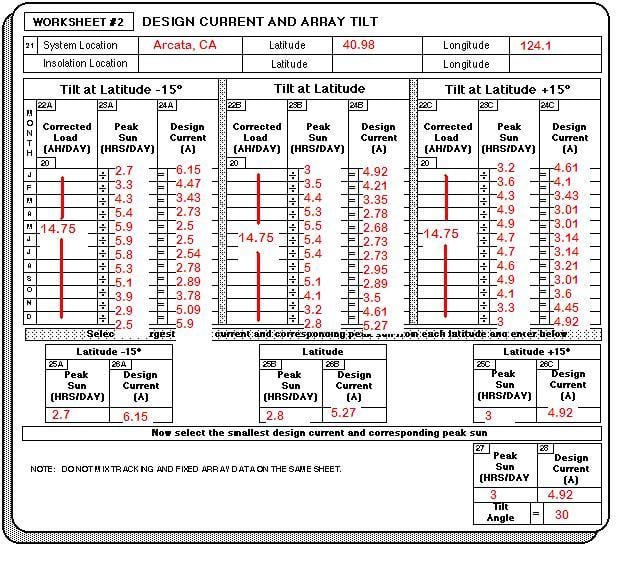 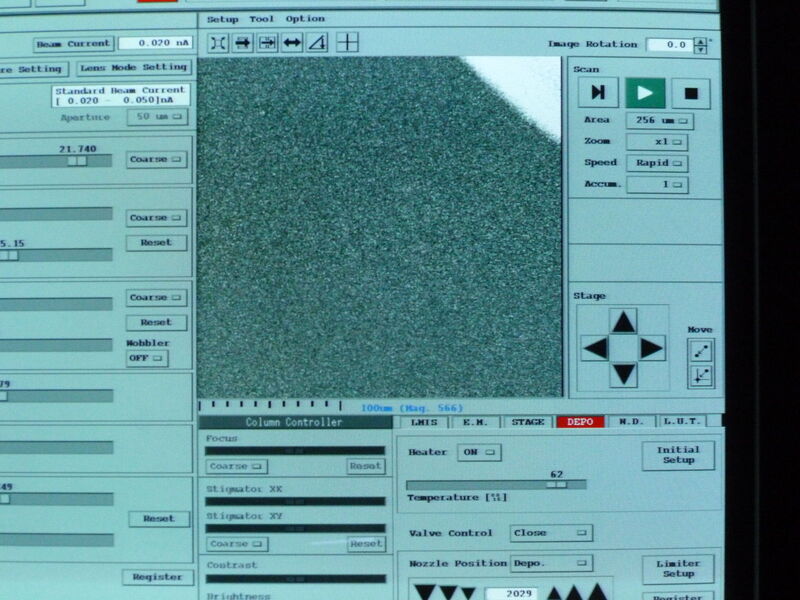 Fig.11: worksheet 3. This section was filled out by working backwards with using one battery. In reality the low voltage disconnect of the charge controller causes the battery to have a max. discharge depth of 20%. battery life under the given loads was determined by finding the difference between fully charged battery and low voltage disconnect, dividing the difference by daily amp-hours of loads and multiplying the dividend by 24 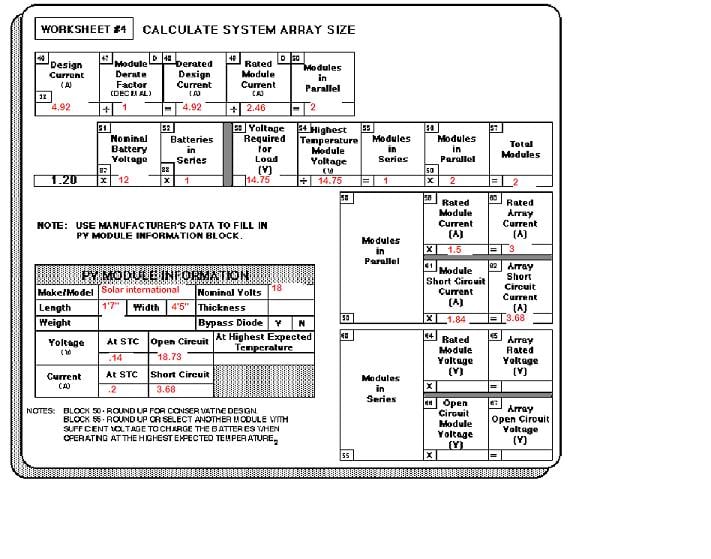 Fig.12: worksheet 4. This section was filled out working backwards with 2 panels. Due to wear and tear the panels do not have exactly the same output current or voltage. 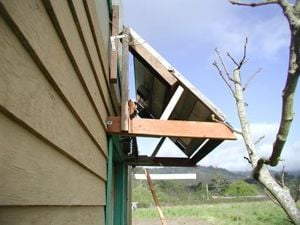 If trouble occurs, turn off then back on. If problem persists, take home to try in different outlet. For programming, see enclosed user manual.

For hook up and wiring instructions, please see enclosed diagram. For basic troubleshooting, test all three connection points with a voltmeter. If they are bad, it may need replacement. If they are good (have all the same voltage), the problem is most likely something else.

Check all points for corrosion and test each terminal with a voltmeter. If the voltage is below 12 volts and/or the Low Voltage Disconnect light is lit on the Charge Controller, unplug the answering machine and wait until you have two hours of full sun, then re-test. If not charging, the battery may be bad.

Using a voltmeter, test points on both sides of the inverter(one is AC and the other DC), during full sun if possible. For more troubleshooting, see the enclosed manual.

Test panel by disconnecting from charge controller during full sun and using a voltmeter to test the voltage. It should be around 18 volts DC. The chart on the following page is a table of common faults and possible remedies.

It is important to test the performance of the panels so that the system power output can be calculated. The performance of a photovoltaic panel are measured by its short circuit current, its open circuit voltage, and the maximum power point, all of which are expressed by graphing the panels current against its voltage, known as an I-V curve. To determine the current-voltage curves, it was necessary to learn how to configure multi-meters, a rheostat, and photovoltaic panels in a way such that current and voltage readings can be taken incrementally as the rheostat is adjusted. 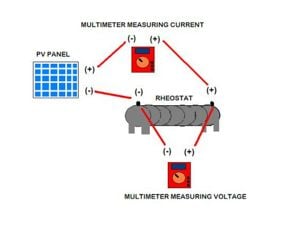 recording data for each individual panel and both panels wired in parallel, Minitab software was used to create a graph of the current-voltage curve. 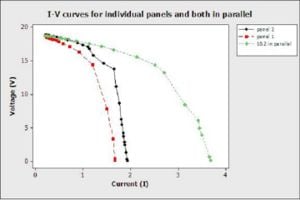 Fig.15 When the two panels are put in parallel their current becomes the sum of their individual currents, as evident in the graph.

A battery tester was used to determine that the battery was functional. 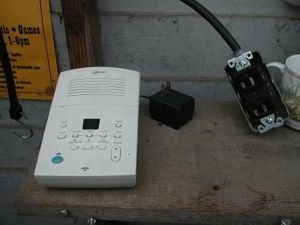 Fig.16 To test the draining abilites of the battery, the 4 watt answering machine as a test load

To prevent damage to the system, a sign is posted stating the following information