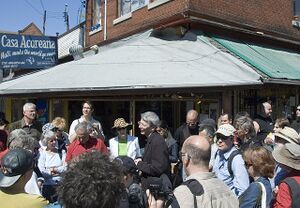 Toronto ( (listen) tə-RON-toh; locally [təˈɹɒɾ̃ə] or [ˈtɹɒɾ̃ə]) is the capital city of the Canadian province of Ontario. With a recorded population of 2,794,356 in 2021, it is the most populous city in Canada and the fourth most populous city in North America. The city is the anchor of the Golden Horseshoe, an urban agglomeration of 9,765,188 people (as of 2021) surrounding the western end of Lake Ontario, while the Greater Toronto Area proper had a 2021 population of 6,712,341. Toronto is an international centre of business, finance, arts, sports and culture, and is recognized as one of the most multicultural and cosmopolitan cities in the world.

Bike Share Toronto is a bicycle-sharing system in Toronto, Canada. The system consists of 6850 bicycles and 625 stations, and covers over 200 square kilometres (80 square miles) of the city, from Finch Avenue in the north, Rouge Park in the east, Lake Ontario to the south, and to Long Branch to the west. Bike Share Toronto recorded 3,575,000 trips in 2021. The system was launched in 2011 by PBSC Urban Solutions under the BIXI brand and was taken over by the Toronto Parking Authority in 2014.

The Sharing Depot, community hub where members have access to a wide range of things without owning or storing them.

Institute for a Resource-Based Economy

Sharing Depot Brings Library of Things to Toronto, May 23[3]

The forgotten space under a Toronto highway is becoming a huge park, Nov 20[5]

How an Oven Changed the Fate of a Neglected Toronto Park, September 18[6]

Page data
Retrieved from "https://www.appropedia.org/w/index.php?title=Toronto_community_action&oldid=659443"
Cookies help us deliver our services. By using our services, you agree to our use of cookies.
Categories:
About Appropedia · Policies · Contact · Content is available under CC-BY-SA-4.0 unless otherwise noted.