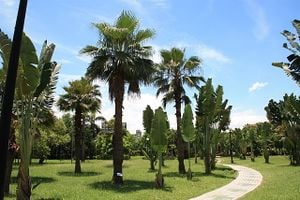 Taiwan, officially the Republic of China (ROC), is a country in East Asia, at the junction of the East and South China Seas in the northwestern Pacific Ocean, with the People's Republic of China (PRC) to the northwest, Japan to the northeast, and the Philippines to the south. The territories controlled by the ROC consist of 168 islands, with a combined area of 36,193 square kilometres (13,974 sq mi). The main island of Taiwan, also known as Formosa, has an area of 35,808 square kilometres (13,826 sq mi), with mountain ranges dominating the eastern two-thirds and plains in the western third, where its highly urbanised population is concentrated. The capital, Taipei, forms along with New Taipei City and Keelung the largest metropolitan area of Taiwan. Other major cities include Taoyuan, Taichung, Tainan, and Kaohsiung. With around 23.9 million inhabitants, Taiwan is among the most densely populated countries in the world.

From Wikipedia:National parks of Taiwan

National parks of Taiwan are protected spaces for the nature, wildlife, and history under their current jurisdiction. Currently there are nine national parks in Taiwan, all under the administration of the Ministry of the Interior. These national parks cover 7,489.49 square kilometres (2,891.71 sq mi). The 3,103.76-square-kilometre (1,198.37 sq mi) total land area constitutes around 8.6% of the entire land area of the country.

The first national parks were designated for establishment in 1937, when Taiwan was under Japanese rule, though never formally managed as such. After World War II, calls for protecting the natural environment were met with opposition due to the prioritization of economic development. The National Park Law was passed in 1972 and the first national park was established in 1984.

National parks should not be confused with national scenic areas. The national scenic areas are administered by the Tourism Bureau of the Ministry of Transportation and Communications. There are also different philosophies that govern the development of the two types of areas. For a national park, the emphasis is on the preservation of natural and cultural resources, with development for human utilization being a secondary priority.

From Wikipedia:Deforestation in Taiwan § Third period

The third period in 1995–2015, saw major afforestation made and forested land reached its peak at 67% in 2010. Most of the afforestation were made on former agricultural land. Since 2008, companies, individuals and government bodies have jointly planted more than 230 km2 of trees.

Policymakers have been using open-source tools, including Pol.is, to crowdsource feedback for policies on ride-hailing apps, among other things. Another social movement, driven by the same tools and decentralized organizing methods as the Sunflower Movement, resulted in the country deciding to shut down all of its nuclear power plants by 2025.

With the election of President Tsai Ing-wen last year — a social progressive who vowed a "new era" of democracy — Taiwan has become a leader in tech policy and transparency. In fact, one of the leaders of the digital movement, Audrey Tang, was appointed head of a new council on digital policy, and describes herself as a "hacker minister."

At the forefront of Taiwan's digital movement is the unique, open-source community called g0v. Initially they came to prominence for creating alternative versions of Taiwanese Government websites, replacing the.gov with a.g0v and making data about ministries, budgets, and finances more transparent to Taiwanese citizens.[1]

Another initiative, vTaiwan, uses social media paradigms for citizens to create digital petitions. Those with 5,000 signatories are brought to the premier and government ministries to be addressed. Changes implemented through this system include access to income tax software for non-Windows computers, and changes to cancer treatment regulations. The Taiwanese parliament complained that citizens had better access to influence regulation than they did as legislators. W

The vTaiwan process was established by a civil society movement called g0v, at the invitation of the Taiwanese Minister for Digital Affairs. It followed g0v's major role in the 2014 Sunflower Movement protests; started over a controversial trade agreement with China.

The process was designed as a neutral platform to engage experts and relevant members of the public in large-scale deliberation on specific topics.

The process itself is designed to facilitate constructive conversation and consensus-building between diverse opinion groups. It does this by creating several stages, including an initial 'objective' stage for crowdsourcing facts and evidence, and a 'reflective' stage using mass deliberation tool Pol.is, which encourages the formation of 'rough consensus'. Finally, key stakeholders are invited to a live-streamed, face-to-face meeting to draw up specific recommendations.

Facilitators and g0v volunteers guide people through each stage using different web tools, including timelines, email updates and access to clear information. In a radical approach to transparency, the entire consultation is continuously summarised, transcribed and published in an open, structured and searchable format.

vTaiwan's achievements to date include: a crowdsourced bill successfully passed through parliament on Closely Held Company Law; the resolution of a disagreement between civil society activists on the topic of internet alcohol sales; and the ratification of several items on ridesharing (Uber) regulations.[2] 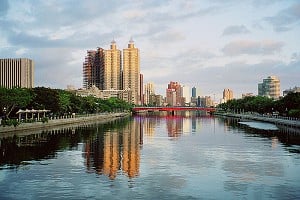 From Wikipedia:Renewable energy in Taiwan

From Wikipedia:Wind power in Taiwan

Wind power is a major industry in Taiwan. Taiwan has abundant wind resources however a lack of space on land means that most major developments are offshore. As of February 2020, there were 361 installed onshore turbines and 22 offshore turbines in operation with the total installed capacity of 845.2 MW.

YouBike, or Taipei Bike Sharing System, is a public bicycle sharing service offered by the Taipei City Department of Transportation in a BOT collaboration with local manufacturer Giant Bicycles. As of 26 May 2016, service stations in the bike system are available in Taipei City, New Taipei City, Taoyuan City, Hsinchu City, Taichung City, Changhua County, and Miaoli County. In Taipei City, rental is NT$5 for the first 30 minutes of use and adopts progressive tolls from NT$10 to NT$40 thereafter. No other fee, such as yearly deposit, is required. In New Taipei City, Taichung City and Changhua County, rental is free for the first 30 minutes. There is a 15-minute renewal restriction period at the station to which the bike was returned.

A Strong Democracy Is a Digital Democracy, Oct 17[4]

Return of the Bicycle Kingdom? How pavement cycling is transforming Taipei, Mar 15[7]

From Wikipedia:Geography of Taiwan § Environmental issues

Some areas in Taiwan with high population density and many factories are affected by heavy pollution. The most notable areas are the southern suburbs of Taipei and the western stretch from Tainan to Lin Yuan, south of Kaohsiung. By the late 20th century, Taipei suffered from extensive vehicle and factory air pollution, but after the government required mandatory use of unleaded petrol and established the Environmental Protection Administration in 1987 to regulate air quality, the air quality of Taiwan has improved dramatically. Motor scooters, especially older or cheaper two-stroke versions, which are ubiquitous in Taiwan, contribute disproportionately to urban air pollution. The Taichung Power Plant also contributes significantly to air pollution, producing more CO2 than the country of Switzerland.

Other environmental issues include water pollution from industrial emissions and raw sewage, contamination of drinking water supplies, trade in endangered species, and low-level radioactive waste disposal. Though regulation of sulfate aerosol emissions from petroleum combustion is becoming stringent, acid rain remains a threat to the health of residents and forests. Atmospheric scientists in Taiwan estimate that more than half of the pollutants causing Taiwan's acid rain are carried from China by monsoon winds.

Page data
Retrieved from "https://www.appropedia.org/w/index.php?title=Taiwan_community_action&oldid=656377"
Cookies help us deliver our services. By using our services, you agree to our use of cookies.
Categories:
About Appropedia · Policies · Contact · Content is available under CC-BY-SA-4.0 unless otherwise noted.