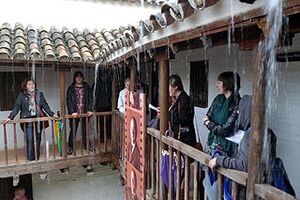 CASwiki news articles have a focus on news of community action for sustainability. This article is an offshoot from CASwiki's Spain community action article and is for news and comment in that context. Image: Jane's walk 2012 Córdoba, Author: Colaborativa dot eu
Location data

How to live with large predators – lessons from Spanish wolf country, Nov 15[1]

'A role model': how Seville is turning leftover oranges into electricity, Feb 23[3]

Can we have a regenerative and circular tourism? As a Mallorca resident, Daniel Wahl thinks it's possible, Jan 19[4]

Balearic Islands bank on their sun to kickstart power drive, Adam Vaughan, May 4[6]

What a city in Spain learned from Sweden about promoting local food and healthier eating, Jul 21[11]

How One City in Spain Launched a Local Currency, Jun 8[13]

Barcelona is kicking cars off many of its streets, Oct 4[21]

Each Street Redevelopment Is a Chance for the City, September 30[27]

Welcome to Jun, the town that ditched bureaucracy to run on Twitter, July 2[28]

Cycling share doubles in Vitoria-Gasteiz, the new cycling champion of Spain, May 27[30]

Spain Got 47 Percent Of Its Electricity From Renewables In March, April 2[31]

How Seville transformed itself into the cycling capital of southern Europe, January 28[32]

"We Are Energy": Community Energy from Scotland to Spain, January 14[34]

El Hierro to become the first island in the world to be fully energy self-sufficient through combined wind and water power, May 1[36]

Spain: wind power becomes main source of energy, January 15[39] "Spain is the first country in the world where wind energy was the technology that most contributed to the coverage of demand in a full year," AEE (industry association). Renewable sources of energy as a whole covered 42.4 percent of demand last year.

Page data
Retrieved from "https://www.appropedia.org/w/index.php?title=Spain_news&oldid=669086"
Cookies help us deliver our services. By using our services, you agree to our use of cookies.
Categories:
About Appropedia · Policies · Contact · Content is available under CC-BY-SA-4.0 unless otherwise noted.