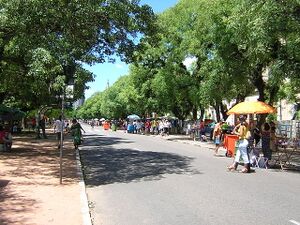 Porto Alegre (UK: , US: , Brazilian Portuguese: [ˈpoɾtu aˈlɛɡɾi] (listen); lit. '"Joyful Harbor"') is the capital and largest city of the Brazilian state of Rio Grande do Sul. Its population of 1,488,252 inhabitants (2020) makes it the twelfth most populous city in the country and the center of Brazil's fifth largest metropolitan area, with 4,405,760 inhabitants (2010). The city is the southernmost capital city of a Brazilian state.

In recent years, Porto Alegre hosted the World Social Forum, an initiative of several non-government organizations. The city became famous for being the first city that implemented participatory budgeting. The 9th Assembly of the World Council of Churches was held in Porto Alegre in 2006. Since 2000, Porto Alegre also hosts one of the world's largest free software events, called FISL. W

Reforms following Brazil's military dictatorship (1964–1985) included citizen decision-making power over their water utilities and participatory governance mechanisms, such as the Deliberative Council and the Participatory Budgeting. These have significantly contributed towards the modern success of the DMAE.

The Deliberative Council (DC) is one of the DMAE's three functional management bodies. Formed by a heterogeneous group of experts and delegates from citizens' organizations, the DC is a non-party institution that controls and approves all operations and decisions taken by the DMAE. How the budget is spent is also decided by the people: the annual Participatory Budgeting process, whose internal rules are established by participating citizens themselves, lets them choose the priority level of upcoming city projects through neighbourhood assemblies, "thematic" assemblies, and citywide coordinating sessions.

The DMAE has become the largest and one of the most efficient municipal providers of sanitation services in Brazil. Treated water reaches 100 percent of Porto Alegre's population, and sewer collection services cover 87.7 percent. Participatory budgeting has significantly improved situations in peripheral areas, with around 50,000 residents taking part on this process.[2]

Participatory budgeting in Porto Alegre has occurred annually, starting with a series of neighborhood, regional, and citywide assemblies, where residents and elected budget delegates identify spending priorities and vote on which priorities to implement. Porto Alegre spent about 200 million dollars per year on construction and services, This money is subject to participatory budgeting, unlike the annual spending on fixed expenses such as debt service and pensions, which is not subject to public participation. Around fifty thousand residents of Porto Alegre took part at the peak of the participatory budgeting process (compared to 1.5 million city inhabitants), with the number of participants having grown year on year since 1989. Participants are from diverse economic and political backgrounds. Although participatory budgeting appears to continue in the city today, two prominent scholars on the process have stated that "after the defeat of the Workers' Party in late 2004, a politically conservative coalition maintained the surface features of PB while returning the actual functioning of the administration to more traditional modes of favor-trading and the favoring of local elites."

The participatory budgeting cycle starts in January and runs throughout the year in many assemblies in each of the city's 16 districts, dealing with many areas of interest to urban life. The meetings elect delegates to represent specific neighborhoods. The mayor and staff attend, in order to respond to citizens' concerns. In the following months, delegates meet to review technical project criteria and district needs.

A World Bank paper suggests that participatory budgeting has led to direct improvements in facilities in Porto Alegre. For example, sewer and water connections increased from 75% of households in 1988 to 98% in 1997. The number of schools quadrupled since 1986. According to Fedozzi and Costa, this system has been recognized as a successful experience of interaction between people and the official administrative spheres in public administration and, as such, has gained a broad impact on the political scene nationally and internationally, being interpreted as a strategy for the establishment of an active citizenship in Brazil. The distribution of investment resources planning that follows a part of the statement of priorities for regional or thematic meetings, culminating with the approval of an investment plan that works and activities program broken down by investment sector, by region and around the city. Also according to Fedozzi, this favors:

The World Social Forum (WSF, Portuguese: Fórum Social Mundial [ˈfɔɾũ sosi'aw mũdʒiˈaw]) is an annual meeting of civil society organizations, first held in Brazil, which offers a self-conscious effort to develop an alternative future through the championing of counter-hegemonic globalization.

The World Social Forum can be considered a visible manifestation of global civil society, bringing together non governmental organizations, advocacy campaigns, and formal and informal social movements seeking international solidarity. The World Social Forum prefers to define itself as "an opened space – plural, diverse, non-governmental and non-partisan – that stimulates the decentralized debate, reflection, proposals building, experiences exchange and alliances among movements and organizations engaged in concrete actions towards a more solidarity, democratic and fair world....a permanent space and process to build alternatives to neoliberalism."

The World Social Forum is held by members of the alter-globalization movement (also referred to as the global justice movement) who come together to coordinate global campaigns, share and refine organizing strategies, and inform each other about movements from around the world and their particular issues. The World Social Forum is explicit about not being a representative of all of those who attend and thus does not publish any formal statements on behalf of participants. It tends to meet in January at the same time as its "great capitalist rival", the World Economic Forum's Annual Meeting in Davos, Switzerland. This date is consciously picked to promote alternative answers to world economic problems in opposition to the World Economic Forum.

A demographic transformation of the organisational background has taken place since a decade ago when critical voices were raised. As of autumn 2020, preparatory meetings for the 2021 World Social Forum are run by a younger generation of female and male organisers while the founders (Oded Grajew and Chico Whiteker) have usually not intervened. Communicating languages are mainly Spanish and Portuguese (because of many Latin American organisers), and also English and French. New individuals, social groups and movements are invited to co-organise events in 2021; new ecological movements run by young generations, for example.