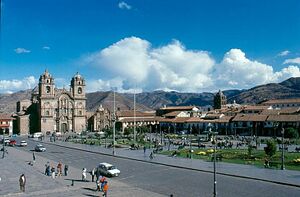 Peru ( (listen); Spanish: Perú [peˈɾu]; Quechua: Piruw [pɪɾʊw]; Aymara: Piruw [pɪɾʊw]), officially the Republic of Peru (Spanish: República del Perú ), is a country in western South America. It is bordered in the north by Ecuador and Colombia, in the east by Brazil, in the southeast by Bolivia, in the south by Chile, and in the south and west by the Pacific Ocean. Peru is a megadiverse country with habitats ranging from the arid plains of the Pacific coastal region in the west to the peaks of the Andes mountains extending from the north to the southeast of the country to the tropical Amazon basin rainforest in the east with the Amazon River. Peru has a population of 34 million, and its capital and largest city is Lima. At 1.28 million km2 (0.5 million mi2), Peru is the 19th largest country in the world, and the third largest in South America.

The Economic Commission for Latin America and the Caribbean (ECLAC) estimates that the economic losses related to climate change could reach over 15% of national gross domestic product (GDP) by 2100. In 2010, Peruvian greenhouse gas emissions represented only 0.4% of global emissions. However, emissions are rising nationwide – particularly in the energy and transport sectors. In an effort to combat this, the Government of Peru approved a law to establish a national greenhouse gas inventory system called INFOCARBONO. INFOCARBONO will enable different ministries to include greenhouse gas management in their work.

From Wikipedia:Environmental issues in Peru § Emissions

The most immediately visible problem of climatic change in Peru is the melting of glaciers in the Andes. Peru is home to 71 percent of the world's tropical glaciers and since 1970 glacial volume has decreased by 40 percent. Many areas of Peru depend upon glacial melt for water for consumption, irrigation, and industry. In the Cordillera Blanca, for example, glacial melt provides 80 percent of water in the rivers during the dry season and 4-8 percent during the rainy season. The consequence of increased glacial melt is floods during the wet season and less water in rivers during the dry season. The desert coast of Peru has 52 percent of Peru's population on 12 percent of its land area and is especially vulnerable to fluctuations in its water supply, nearly all of which comes from rivers originating in the Andes. Accelerated glacial melt and the eventual disappearance of glaciers will severely impact the quantity of water available in the coastal and mountain regions. W

Peru has some of the greatest biodiversity in the world.

Non-profit work on water accessibility without government support is currently occurring, in Northern Peru, in the Talara region. EcoSwell identified a need for sustainable organizing and environmental and economic stability. Their bottom-up approach to community mobilization focuses on "the needs of the base of the pyramid". Ecoswell has chosen the town of Lobitos for its coastal location, its growing population, and its flow of tourism, as well as the threat to this town from climate change. EcoSwell has multiple projects focused on the long-term sustainability of this region's ecology, with a commitment to "no growth" or to a "steady-state economy". Ecoswell's projects are in line with the Peruvian government's commitment and recognized success in achieving the "sustainability sweet spot". One project uses solar-powered distillers to desalinate ocean water; Ecoswell is currently seeking support from the community and more funding to expand this project. Lobitos is located in a dry zone that does not have a lot of access to fresh water, so desalinization (drawing on the ocean nearby) is a smart alternative during drought periods.

Ecoswell Peru is a non profit organization founded by four lifelong friends with the mission of developing the coastal town Lobitos. Upon meeting up in Lobitos for a surfing trip, these four friends pondered upon a grave realization. This realization was that lobitos was severely underdeveloped; there was a lack of clean water; the sewage system was defective; and the dry forest ecosystem was degrading rapidly. In an effort to restore the ecosystem of their favorite vacation spot, these lifelong companions collaborated together and created the non profit organization EcoSwell. EcoSwell was founded in 2013 and is composed of city locals as well as volunteer interns from around the world. Together the members of EcoSwell work on different projects and tasks to resolve the main objective which is to essentially develop the degraded coastal town of Lobitos.

Peru has the fourth-most tropical forests of any country and the ninth-most forest area. W

There are 12,201 lakes and lagoons in Peru, 3,896 of which are located in the Pacific basin; 7,441 in the Atlantic basin, 841 in the Titicaca basin, and 23 in the Huarmicocha system. Peru contains approximately 50,000 km2 of swamps and 45 km2 of mangroves.Peru's wetlands play an important role for rural communities. These wetlands are the source for animal protein and for totora, a plant used in the artisan production of boats and floating devices. Estuaries are also fundamental for the reproduction of several marine species that are basic for the fishing industry. Other uses such as industrial production of algae and bird-watching tourism are not yet fully discovered. In 1996 the Government adopted a National Wetlands Conservation Strategy aimed at increasing the area of mangroves, moors, estuaries, and lagoons considered to be protected areas. Uncertainties about land ownership, industrial pollution, urban sprawl, and deforestation continue to threaten wetland integrity in Peru. The complete Pucchun Lagoon in Arequipa, 50 km2, has been dried out for agricultural purposes. The Villa Swamp, located south of Lima, was reduced from its original 50 to 3 km2 in 1989 due to urban sprawl.

It has been estimated that Peru has favorable conditions for the development of solar energy projects. However, the country's solar potential has not been exploited yet. In the mountain ranges located in the South, solar energy reaches average levels above 6 kWh/m2/day, which are among the highest worldwide.

From Wikipedia:Electricity sector in Peru § Solar

There are river boat service from Yurimaguas and Pucallpa to Iquitos, and from there to the Brazilian border in the Amazon river.W

Peru To Provide Free Solar Power To 2 Million Of Its Poorest Residents By 2016,[4] July 23

Projects from Peru and Lao PDR share UNEP Sasakawa prize 2008,[6] June 4. Practical Action, founded in 1966, is working in Peru's eastern Andes where 68 per cent of the population - around 5 million people - do not have access to electricity. The project makes use of the region's vast potential for hydroelectricity: to date, 47 micro-hydro schemes have been installed in the area through Practical Action, bringing clean power to about 30,000 people.

The electricity supply is boosting the development of the remote communities. Previously, people moved away to start businesses in places where the infrastructure was better, but the electricity from the micro-hydro schemes has brought them back. Some villages have doubled in size, with people returning and others starting or expanding businesses including restaurants, bakeries, furniture makers, welders and internet cafes.

From Wikipedia:Environmental issues in Peru

Parts of Peru are located in vast deserts, limiting water accessibility. While there has been an emphasis within the country on improving infrastructure to increase water access and restore watersheds, much of Peru still remains under-served, with over 1.5 million people estimated to have no running water in their homes. A 2015 UN Water Global Analysis and Assessment of Sanitation and Drinking Water report stated that Peru has made significant improvements within the last fifteen years to promote sanitation and improve access to water. Water access, however, is still unequal; some Peruvians pay 1.3 sols (.40 USD) for one cubic meter of running water, while poorer citizens who rely on water delivery trucks to bring them their resources pay around 20 sols ($6 USD) for one cubic meter of running water, an over 1500% increase. Water delivered in Peru tends to be unsanitary and non-potable. However, wealthier citizens are more easily able to treat water in their homes, while poorer citizens often lack the resources to properly treat their water.

From Wikipedia:Water supply and sanitation in Peru § Social access

Page data
Retrieved from "https://www.appropedia.org/w/index.php?title=Peru_community_action&oldid=695261"
Cookies help us deliver our services. By using our services, you agree to our use of cookies.
Categories:
About Appropedia · Policies · Contact · Content is available under CC-BY-SA-4.0 unless otherwise noted.