Inputs: PTUA's specification of which bus routes to improve, and what frequency to use. Working OSSTIP tools to allow sub-setting an existing GTFS network, and modifying the frequency of certain routes, to then create a new GTFS file (See OSSTIP/WP6).

As part of the PTUA Action-Case work in building OSSTIP, improving a selected subset of the bus network's frequency was one of the negotiated targets to analyse and communicate as part of their network reform policy proposal.

Specifically, the bus networks to increase to 10-min or lower headway, during 6am-midnight 5am-midnight (extended due to long routes, see below), 7-days-a-week, are:

Much work was put into the OSSTIP/SimpleGTFSCreator package in late 2014 for extracting the 'abstract network topology and service' levels from an existing GTFS timetable, in order to support modification.

To simplify the task, I first added some GTFS sub-setting tools by Geometric region to reduce the number of relevant routes to process. By applying this using a polygon around "metro Melbourne", the area of interest for our network upgrades package, it reduced the number of bus routes in the GTFS from 681 (for all of Victoria) to 362.

The subsetting script in SimpleGTFSCreator is called subset_trips_by_route.py, and the resulting GTFS file in the OSSTIP_Common_LargeFile_Archives Dropbox is in the subpath:- GTFS/GTFS-ExtractedData-201406/melb-bus-gtfs-2014_06-metro.zip

I then wanted to extract just the bus routes specified for upgrading, to separate GTFS files, and then create a further GTFS file for the bus routes we weren't going to upgrade. The strategy here is that the smaller GTFS files of bus routes to upgrade could then be modified, while the remaining routes could be used as-is in calculations. This is because OpenTripPlanner has the nice feature of being able to combine an arbitrary number of GTFS files into a single 'graph' for routing analysis (as long as each GTFS file has separate trip, route etc IDs).

So with further use of the SimpleGTFSCreator subset_trips_by_route.py script, I created these new GTFS files as follows:-

So the next stage was to extract the generalised network topology and service levels from the first of these two files, so we could modify them and create new upgraded versions.

The next more challenging step in the process was to extract the topologies and service levels of each of the routes we wished to upgrade, in order to create a new GTFS file.

I had already worked-through the first version of this process, using new scripts/capabilities described in OSSTIP/WP6 and applied to the simpler train network in OSSTIP/WPPTUA3.

However the bus routes present some challenges here, as several routes involve:-

In order to add too much complexity to SimpleGTFSCreator, both of these issues are currently dealt with in a fairly simplified way:-

Generally for the bus network these simplifications seemed to work satisfactorily, and we were able to extract both topologies (in the form of route stops, segments, and orderings of segment traversal on each route), and service performance in the form of speeds on segments at different times of day, and frequency of visiting each stop.

(Note 11th March 2015:- it would be good to return to the issue of allowing looped routes though, as this may be having a non-trivial impact on network performance in a couple of cases. It needs further analysis.)

Here are some exports from a QGIS project showing these routes, in the form of:- 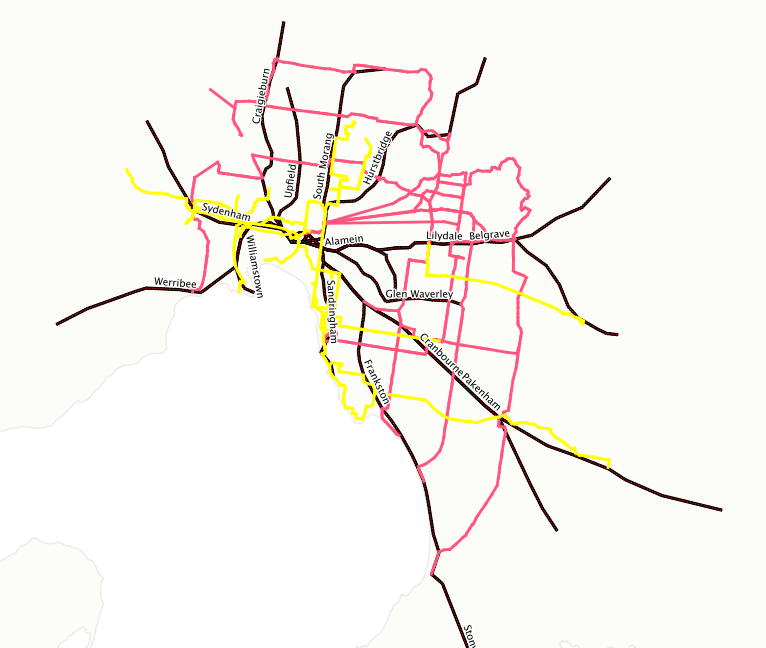 As a result of sending the above image to PTUA workshop participants and discussing during one of our work-sessions in early November 2014:- we agreed to simulate upgrading a larger set of current bus-routes to a 10-minute service frequency during the periods of interest. This was as a result of aiming to get greater coverage of the Melbourne metropolitan area in the list of upgraded routes.

So once the list of upgraded routes to upgrade was decided (listed in the requirements section above), I re-ran the steps of generating sub-setted GTFS timetables, to produce GTFS files as follows:

An export from QGIS showing what the topology of this second set of upgraded routes looks like is provided below, with: 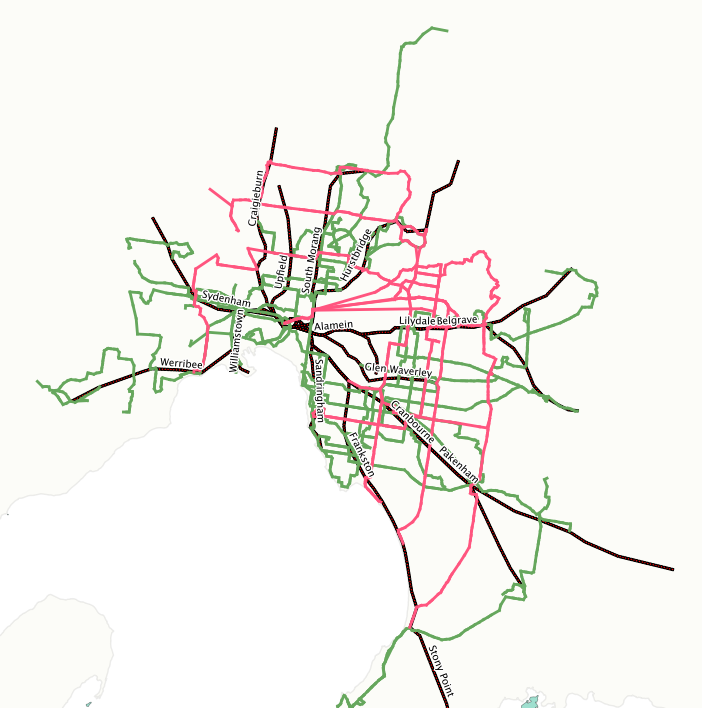 The speeds between segments, and the frequency of visiting stops, were extracted in one-hour time blocks throughout the service period.

So to fulfil the PTUA design requirement of changing the service frequency to "10-min or lower headway, during 6am-midnight, 7-days-a-week":- we simply needed to search through and modify the extracted CSV files containing these headways, and save the resulting higher-frequency versions.

This was done with a new script in SimpleGTFSCreator, increase_route_freqs.py . (This script could also add 'missing' service periods, e.g. add files for bus routes that didn't run on a Sunday, so these would be included in the new timetable).

We could then use the SimpleGTFSCreator create_gtfs_from_basicinfo.py script, using the modified route frequency in time period CSV files, to create modified output GTFS files for the Smartbus routes and regular bus routes to upgrade. These were saved at:-

Note:- also stored in the OSSTIP_PTUA Dropbox are Bash shell scripts listing all the SimpleGTFSCreator commands necessary to create the modified timetables.

Below is an example of viewing one of the new upgraded route timetables in the ScheduleViewer web-app that comes with the TransitFeed library. Note how the time-service graph at the bottom of the image shows services at a consistent 10-minute interval throughout the service day. 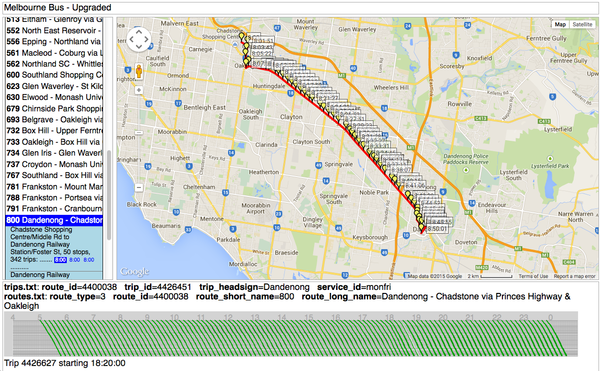 Issue with very long smartbus routes, and splitting of routes as a result[edit | edit source]

While performing routing based on the upgraded timetables as part of OSSTIP/WPPTUA4 in February 2015:- we discovered a problem with the above methodology in relation to several of the very long Smartbus routes.

Essentially:- since some of these routes are over 100 km long (one-way) and take over 4 hours to fully traverse if stopping at every stop:- even with the first services starting on the routes beginning at 6AM, buses would not reach the other end of the longest routes each day until after 10AM.

This has a serious impact on trip-possibilities for journey-to-work trips in simulations.

So after discussing what approach to take to deal with this with the PTUA team, we decided on two responses:

To achieve this, I wrote a new script in SimpleGTFSCreator called break_routes_subsections.py, that could read in a JSON file specifying where the routes should be split, and what the new names should be.

This worked successfully, here are some extracts of the route information before and after the breaking of the selected routes:-

This meant the longest time to traverse fully any of the routes was 2hrs, 48 minutes.

Note:- we only followed Transdev's guidlines of where to split the routes and the new names :- we didn't also implement changing the actual geometry of one of the routes.

Another issue with the newly-created bus network timetables we noticed in February 2015 while working on routing journeys on the new vs old networks in OSSTIP/WPPTUA4 was that travel times between the same stop pairs seemed to have increased markedly on several of the Smartbus routes - I.E. up to 30% slower in some cases. This was having a significant impact on possible travel-times for certain trips.

This required investigating the approach to extracting generalised service characteristics from the original GTFS file for these routes using the new scripts in OSSTIP/WP6 - specifically, speed between stop pairs.

Some of the Smartbus routes seemed to be problematic in particular, in the case where they had (a) many stops close together, and (b) some segments much slower than others (e.g. going into or out of shopping centers).

After some investigation I realised that this could be addressed through modifying the parameters used in the 'speed smoothing' part of the extraction algorithm. The default parameters were more appropriate for trains, which generally run at significantly faster speeds at further spaced stops than buses. As a result of experimenting with several sets of parameters, we selected some that resulted in speeds - and thus new timetables - more similar to the existing service. These were:

With several manual tests using our OpenTripPlanner router instance afterwards, the resulting travel times between segments seem to be more directly comparable to the pre-upgrade results. (Further, semi-automated testing would be good, but isn't something we plan to pursue in the short term).

Thus we now have three output GTFS files which together, can be used to route trips on the modified and upgraded bus network, per PTUA's request:

Running the upgraded sections of the bus network at 10 minutes frequency results in a change in the estimated number of required buses in peak hour (8AM weekdays) from: