Time-dependent schedules for peak and off-peak, and varying this spatially[edit | edit source]

We've now added time-dependent timetable generation capability, at least for a simple model of either being in 'peak' or 'off-peak' network congestion mode. So this is an improvement on OSSTIP/WP5.

This has added a degree of complexity to the SimpleGTFSCreator repository's 'create_gtfs_from_basicinfo.py' script, but performance is still acceptable: less than 10 minutes to create the GTFS timetable for BZE's Melbourne network (of 78 routes). 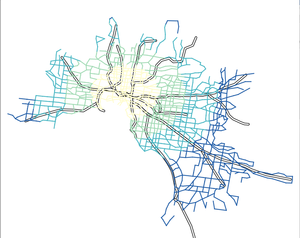 To the right is a screenshot from QGIS showing how peak-speed reduces across the network based on distance from Melbourne's CBD. This can be applied to an existing network topology file using the script 'assign_speeds_to_network_topology.py' in the SimpleGTFSCreator repository.

Adding different speeds for buses in peak vs off-peak does introduce a timetable design challenge:- the phenomenon of buses in the system 'spreading' as speeds slow down in the off-peak to peak transition, and 'bunching' in the reverse transition as buses on the network already speed up. See figures below to see the effect of this, the first shows a time-space graph with a constant speed of 30km/h, the second shows the same frequency of services specification but with a reduction to 15km/h vehicle speed in peak hours.

While this still isn't perfect (there's still some significant bunching occuring for example), at this stage I think it is of sufficient complexity for our strategic network planning purpose. We could improve the representation by using an even more time-dependent approach so that there is not an instant sharp change between peak and off-peak speeds on the roads. But this would require more data collection, and also potentially slow down the timetable generation code and/or add to the complexity of scripts a lot.

As a result I suggest further modelling of detailed timetable planning is left as a 'future upgrade'. This could be considered alongside other relevant improvements such as modelling the possibility of bus priority measures, and applying constraints to keep transfer times minimal with trains & trams at key sections of the network. It is possible other software exists for this kind of detailed timetable design purpose already, and this should be evaluated i think before further increasing OSSTIP complexity at this stage.

So given the above timetable features are 'ready to go', to do updated timetables for BZE's version 1 and version 2 networks, we're now waiting on:

Once these are both done we can apply the process of converting network routes, to network topology shapefiles, and thence to a GTFS timetable.

As of the end of August 2014, we completed converting both BZE V1 and V2 networks into both network topologies, and GTFS timetables (based on a nominated 5-minute bus headway). We ended up adding some routes to the V1 network as a result of evaluation of routing performance, so we have renamed the latest version of the V1 network "V1.2" to denote these added/changed routes.

The topologies are stored in Dropbox at:

All of these directories contain "mkGTFS.sh" shell scripts to run the necessary OSSTIP Python scripts to re-create the topologies and GTFS files from the initial input files.

And the GTFS files are at:

Page data
Retrieved from "https://www.appropedia.org/w/index.php?title=OSSTIP/WPBZE4&oldid=600394"
Cookies help us deliver our services. By using our services, you agree to our use of cookies.
Category:
Maintenance categories:
Comments
Privacy policy · About Appropedia · Disclaimers · Mobile view · Content is available under CC-BY-SA-4.0 unless otherwise noted.
</html