Notes on extensions: Note:- in April 2014, we agreed with BZE to upgrade this conversion and creation workflow to allow for time-dependent schedules, that reflect different vehicle speeds in peak and off-peak periods. See OSSTIP/WPBZE4 for notes on that work. Documentation about the scripts will be updated to reflect this change.

There are two key challenges with utilising software tools that visualise a public transport timetable:

The goal in this work package is produce software scripts and/or tools to support this process to be as efficient as possible. This may involve either writing new scripts, or leveraging existing open source applications, such as TransitDataFeeder.

The envisaged starting point is a set of transport routes saved in a common GIS format, such as ESRI Shapefiles, as developed in OSSTIP/WP1. These would be accompanied by a “desired frequency” and “average speed” of each route – probably to be recorded as part of the GIS database.

From this expected starting point, the scripts tools in this WP are envisaged to (a) create a set of “first cut” GTFS timetable files based on the above inputs; and (b) provide some kind of support/process for identifying where the generated timetable most needs to be further edited manually. This process should also be documented, so it can be reproduced as efficiently as possible throughout later stages of the project.

This is in progress, but we have designed a workflow from Geometric routes and stops, through to NEM Files (Needed by BZE for routing using Netview) and also GTFS.

We now have a working process to convert a set of shapefiles, and auxiliary descriptive information, into a GTFS timetable. It is still 'rough' in sections and could be further improved though.

It involved creating an 'intermediate format' describing route segments, stops, and frequencies along each stop.

The process is roughly as follows. 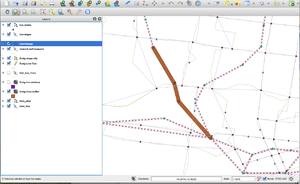 Fig: An example of route 'segments' in preparation - see the Craigieburn train line outlined in brown

Then once this input is created, the conversion steps are roughly as follows:

Then once you've created the GTFS file, it is good to load the file into a suitable viewer such as the Google Transit Data Feed ScheduleViewer, as per screenshots below.

The GTFS can then also be tested in OpenTripPlanner once you build a new graph using this new file, and start a server - e.g. checking that new routed journeys make sense. See OSSTIP/Setup of OpenTripPlanner to display Melbourne PT network.

This is a headway definition over a day, so that there is 5 minutes frequency in peak hour, reducing to 10 minutes inter-peak, and 20 minutes late night and early morning.

Page data
Retrieved from "https://www.appropedia.org/w/index.php?title=OSSTIP/WP5&oldid=620857"
Cookies help us deliver our services. By using our services, you agree to our use of cookies.
Categories:
Maintenance categories:
Comments
Privacy policy · About Appropedia · Disclaimers · Mobile view · Content is available under CC-BY-SA-4.0 unless otherwise noted.
</html