This will give a good indication of whether the tool will be practicable for the rest of the project, and give a baseline to work from for integrating the outputs into more advanced work or modelling (e.g. BZEs transport mode-choice model (REF). This should be demo’d and discussed with the team for feedback.

We chose to use OpenTripPlanner to view and analyse the network after evaluation. OTP has good capabilities in terms of performance, integrated web viewer, and ability to further reprocess data afterwards.

OpenTripPlanner has proven effective to display this network and it is now working.

Here is a link to the OTP Graph Builder XML file I used to create a graph based on Melbourne's train, tram and bus network: https://www.dropbox.com/s/2z1gnz2zg9msc8a/graph-builder-melb-train_bus_tram.xml to supplement these instructions.

Currently this display is being run off individual PCs, generally using Eclipse to run a virtual web-server to display results.

It is possible we would want to display this on a real web-server on the 'net to allow the public to access this - but this isn't part of this Work Package. See OSSTIP/WPBZE3 for example for plans to do this with BZE to show the potential of the improved network.

See also: OSSTIP/OpenTripPlanner Issues for some issues with OTP we're trying to resolve to make it more effective in the OSSTIP project.

Shown below are some sample screenshots.

OpenTripPlanner being used to plan routes in Melbourne: 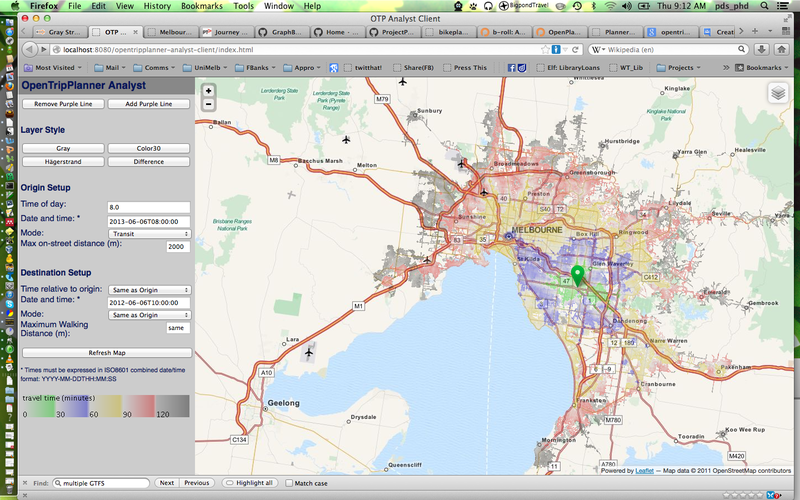 Page data
Retrieved from "https://www.appropedia.org/w/index.php?title=OSSTIP/WP4&oldid=597754"
Cookies help us deliver our services. By using our services, you agree to our use of cookies.
Categories:
Maintenance categories:
Comments
Privacy policy · About Appropedia · Disclaimers · Mobile view · Content is available under CC-BY-SA-4.0 unless otherwise noted.
</html