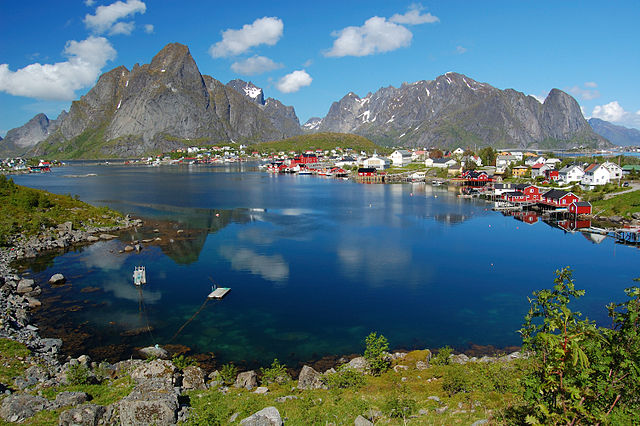 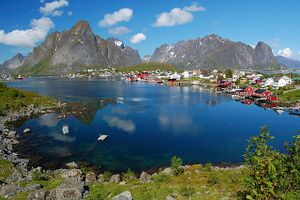 Norway, officially the Kingdom of Norway, is a Nordic country in Northern Europe, the mainland territory of which comprises the western and northernmost portion of the Scandinavian Peninsula. The remote Arctic island of Jan Mayen and the archipelago of Svalbard also form part of Norway. Bouvet Island, located in the Subantarctic, is a dependency of Norway; it also lays claims to the Antarctic territories of Peter I Island and Queen Maud Land. The capital and largest city in Norway is Oslo.

Norway has a total area of 385,207 square kilometres (148,729 sq mi) and had a population of 5,425,270 in January 2022. The country shares a long eastern border with Sweden at a length of 1,619 km (1,006 mi). It is bordered by Finland and Russia to the northeast and the Skagerrak strait to the south, on the other side of which are Denmark and the United Kingdom. Norway has an extensive coastline, facing the North Atlantic Ocean and the Barents Sea. The maritime influence dominates Norway's climate, with mild lowland temperatures on the sea coasts; the interior, while colder, is also significantly milder than areas elsewhere in the world on such northerly latitudes. Even during polar night in the north, temperatures above freezing are commonplace on the coastline. The maritime influence brings high rainfall and snowfall to some areas of the country.

From Wikipedia:Climate change in Norway § Public perception and activism

There seems to be two stories, one about Norway wanting to be a world leader in global climate change and environmental issues whilst the other tends to favour Norway's oil and gas reserves, claiming that its necessary to extract more oil and gas because of high demand and in order to help the poor who in some parts of the world have no access to energy. This duality therefore sends a very polarised message to the Norwegian public and may be part of the reason why there is a lack of engagement or enthusiasm currently observed around the issue of climate change.

From Wikipedia:Climate change in Norway

Climate change in Norway discusses global warming issues that affect Norway, whose territory comprises the western portion of the Scandinavian Peninsula plus the island Jan Mayen and the archipelago of Svalbard. All regions and seasons of Norway are expected to become warmer and wetter due to climate change.

On a per-capita basis, Norway is the world's largest producer, and exporter, of oil and natural gas outside the Middle East. In 2016, 56 new licenses for oil exploration near the Lofoten islands were issued. However, 98% of Norway's electricity demand is supplied by renewable sources, mostly from hydroelectric power, generated using Norway's extensive freshwater reserves. Emissions are also generated through transportation, although Norway is a world leader in electric vehicles.

Warmer temperatures in Norway are causing permafrost and glaciers to retreat, and leading to shifts in precipitation patterns. Climate change is particularly impacting Norway's Arctic region. Biodiversity and forested areas are experiencing shifts due to the phenomenon, with significant implications for the agriculture and economy of the country. Indigenous Sámi people's practices are being impacted by climate change.

Norway's government have introduced several social and economic policies towards climate change mitigation, including through carbon capture and storage. Norway wants to achieve carbon neutrality by 2030, partly by investing in projects with emissions reduction abroad. It wants to achieve zero emission in the country by 2050. In 2020, Norway pledged to achieve a 50% - 55% reduction in domestic emissions from the level of 1990 by 2030.

Dugnad is a Norwegian term for voluntary work done together with other people. It is a core phenomenon for Norwegians, and the word was voted as the Norwegian word of the year 2004 in the TV programme Typisk norsk ('Typically Norwegian'). Participation in a dugnad is often followed by a common meal, served by the host, or consisting of various dishes brought by the participants, thus the meal is also a dugnad.

In urban areas, the dugnad is most commonly identified with outdoor spring cleaning and gardening in housing co-operatives. Dugnader (plural) are also a phenomenon in kindergartens and elementary schools to make the area nice, clean and safe and to do decorating etc. such as painting and other types of maintenance. Dugnader occur more widely in remote and rural areas. Neighbours sometimes participate during house or garage building, and organizations (such as kindergartens or non-profit organisations) may arrange annual dugnader.

The Norwegian word dugnadsånd is translatable to the spirit of will to work together for a better community. Many Norwegians will describe this as a typical Norwegian thing to have.

The word dugnad was used to unite the people of Norway to cooperate and shut down public activities to fight the pandemic of 2020.

Norway Is The First Country In The World To Ban Deforestation, More Countries Need To Follow Suit, Apr 5[1]

Oslo is creating the model for how cities can solve climate change, Oct 14[7]

Norway becomes first country in the world to commit to zero deforestation, Jun 4[12]

Reforestation in Norway: showing what's possible in Scotland and beyond, January 20[14]

Norway Will Divest From Coal in Push Against Climate Change, June 5[17]

A lot of cities could use a Trampe Cyclocable, March 18[20]

Page data
Retrieved from "https://www.appropedia.org/w/index.php?title=Norway_community_action&oldid=668801"
Cookies help us deliver our services. By using our services, you agree to our use of cookies.
Categories:
About Appropedia · Policies · Contact · Content is available under CC-BY-SA-4.0 unless otherwise noted.