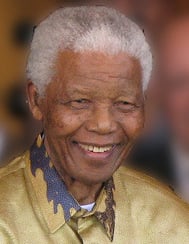 On 27 April 2009, the 46664 concerts and the Nelson Mandela Foundation invited the global community to join them in support of an official Mandela Day. Mandela Day is not meant as a public holiday, but as a day to honour the legacy of Nelson Mandela, South Africa's former President, and his values, through volunteering and community service.

Mandela Day is a global call to action that celebrates the idea that each individual has the power to transform the world, the ability to make an impact.

Page data
Retrieved from "https://www.appropedia.org/w/index.php?title=Mandela_Day&oldid=644689"
Cookies help us deliver our services. By using our services, you agree to our use of cookies.
Category:
Maintenance categories:
About Appropedia · Policies · Contact · Content is available under CC-BY-SA-4.0 unless otherwise noted.