From Appropedia
Redirected from Laos 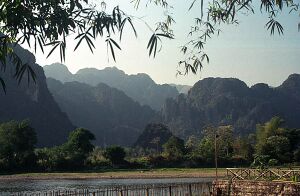 Laos ( (listen)), officially the Lao People's Democratic Republic, is a socialist state and the only landlocked country in Southeast Asia. At the heart of the Indochinese Peninsula, Laos is bordered by Myanmar and China to the northwest, Vietnam to the east, Cambodia to the southeast, and Thailand to the west and southwest. Its capital and largest city is Vientiane.

Deforestation in Laos is a major environmental concern, with Laos losing forest area to legal and illegal logging.

From Wikipedia:Energy in Laos § Impacts on human development

The continual development of Hydropower has positive effects such as flood control, irrigation, and river navigation; conversely, the development of Hydropower plants can negatively affect the 3 million Laotians relying on the Mekong for livelihood and food security. With dams blocking the migration of fish, many communities will experience a loss of fish population. Over the last few years, the development of hydropower dams have caused a 10-20% population loss while during a period of 2001–2003, the Thai-Lao border showcased a 50% catch decrease, greatly affecting local communities and their livelihood. With the hydrology of the Lower Mekong forcefully altered, agricultural lands will experience a new river regime—variability in its discharge—that can negatively affect farms. The most notable change for the population near the Mekong is the loss of agricultural land due to flooding from hydropower dams. Flooding can cause a loss of crop, productivity, livestock. With an increase of floods near agricultural land there can be a loss of nutrition, an input to the productivity of nearby agriculture.

The rural communities of a riparian country like Laos rely heavily on fishing for food security. Hydropower development affecting the migration of fish and productivity of fisheries are a great threat to food security. Local communities are not the ones impacted, a study done by the Mekong River Commission showcased, "Fisheries do not only benefit the people living next to the river or the floodplains, but all of the Lower Mekong Basin countries." Hydropower development indirectly impacts human development on many scales.

From Wikipedia:Transport in Laos § Water transport

About 4,587 kilometres (2,850 mi) of navigable water routes exist in Laos, primarily the Mekong and its tributaries. There are an additional 2,897 kilometres (1,800 mi) of water routes, which is sectionally navigable by craft drawing less than 0.5 metres (1 ft 8 in).

Sunlabob Rural Energy Ltd., set up in 2001, is bringing energy to remote rural communities in Lao PDR, a country where just 48 per cent of the population has access to grid electricity, mostly in cities and town. Through Sunlabob, over 1,800 solar-home-systems (SHS) and 500 solar lanterns are being rented to families in 73 different villages across Lao PDR.

In an area where most people rely on highly polluting kerosene lamps, the initiative rents out solar lighting at a lower price than kerosene, providing families with a real incentive to switch to the cleaner energy. The cheapest solar systems costs 35,000 kip per month (3.80$) to rent, while households typically spend 36,000 to 60,000 kip per month (4 to 6.60$) on kerosene for lighting. As well as being far less sustainable than solar energy, kerosene lamps can be dangerous, causing burns, starting fires and polluting the air indoors.

The equipment is rented through Village Energy Committees (VEC) selected by the whole community: this puts the community in control of setting prices, collecting rents and performing basic maintenance.

The potential for growth in the use of solar PV in Lao PDR is huge: Sunlabob is installing systems at a rate of 500 per year, and a new investment in 2008 will allow it to scale up to 2,500 systems per year, and 5,000 per year after that. The project is also highly replicable: Sunlabob is already starting work in Cambodia and Indonesia, and is exploring possibilities with interested potential partners in Bhutan, East Timor, Eastern Africa and Latin America.