From Appropedia
Redirected from Cambodia 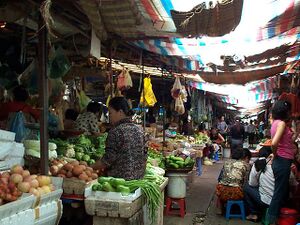 Cambodia ( (listen); also Kampuchea ; Khmer: កម្ពុជា, Kâmpŭchéa [ˈkampuciə]), officially the Kingdom of Cambodia, is a country located in the southern portion of the Indochinese Peninsula in Southeast Asia, spanning an area of 181,035 square kilometres (69,898 square miles), bordered by Thailand to the northwest, Laos to the north, Vietnam to the east, and the Gulf of Thailand to the southwest. The capital and largest city is Phnom Penh.

The sovereign state of Cambodia has a population of over 17 million. Buddhism is enshrined in the constitution as the official state religion, and is practised by more than 97% of the population. Cambodia's minority groups include Vietnamese, Chinese, Chams and 30 hill tribes. Cambodia has a tropical monsoon climate of two seasons, and the country is made up of a central floodplain around the Tonlé Sap lake and Mekong Delta, surrounded by mountainous regions. The capital and largest city is Phnom Penh, the political, economic and cultural centre of Cambodia. The kingdom is an elective constitutional monarchy with a monarch, currently Norodom Sihamoni, chosen by the Royal Council of the Throne as head of state. The head of government is the Prime Minister, currently Hun Sen, the longest serving non-royal leader in Southeast Asia, who has ruled since 1985.

From Wikipedia:Climate change in Cambodia § Mitigation and adaptation

The Cambodian government pledges to reduce emissions by 41.7% in 2030.

From Wikipedia:Climate change in Cambodia

Climate change in Cambodia presents major challenges for the country. Cambodia is highly vulnerable to the effects of climate change. Extreme weather events will occur more frequently; this includes floods, which already affect 90,000 residents annually, and heatwaves, with Cambodia already having one of the highest temperatures of the world. The temperature has increased since the 1960s by 0.18 °C per decade. It had the 7th lowest CO2 emissions in Asia in 2019.

A major climate change issue for Cambodia is the impact it has on the Tonlé Sap lake and Mekong river system. Climate change will impact water flow in the country and increase the frequency of droughts. Hydropower dams have further exacerbated the issue. This will have considerable implications for agriculture and fishing in the country. The Cambodian population, which has a high rate of poverty, is highly vulnerable to the impacts of climate change on tropical cyclones, floods and waterborne diseases.

From Wikipedia:Deforestation in Cambodia § Community forestry

The concept of community forestry started in India in the 1970s. It acknowledges that local communities in forest regions have knowledge and skills to use forests in a sustainable manner. Their knowledge is rooted in the ecological, cultural, and social characteristics of the community. In community forests, local residents are given certain rights and become the main actors of forest management. The goal of community forests is not to make profits or directly support the current residents by itself, but rather to promote sustainable and effective use of environmental resources and their fair distribution for the present and future generations.

Community forests, established in 1994 in Cambodia, aims to ensure locals rights to forest resources. This program allows for locals to directly participate in the protection, conservation, and development of forest resources. Some challenges that have arisen are conflicting interests with how to manage forests within communities, the government's reluctance to transfer resource management power to communities, powerful special interests overshadowing local interests, the costs of management, and lack of needed assistance.

Some researchers argue that the community forestry framework requires industrial forestry reform as well as redefined policies for rural development. Despite its shortcomings, this program has grown very popular among those who live in rural areas. As of 2016, 610 communities participate in community forestry, covering 5,066 square kilometers in 21 provinces. Community forests only cover 2.8 percent of Cambodia's land area which is extremely small compared to the concessions given to commercial forestry.

The communities are the ecological safeguards and they cooperate with the Ministry of Environment to patrol the forest and protect against environmental crimes such as illegal logging and poaching. The communities receive income from collecting non-timber products and funding support from government and development partners. Since 2017, more than 32 million USD are provided by international development partners to support nature conservation and protection of protected areas.

From Wikipedia:Transport in Cambodia § Other transport

Motorcycles are by far the most common transport medium in Cambodia. "Cyclo" (as hand-me-down French) or cycle rickshaws were popular in the 1990s but are increasingly replaced by remorques (carriages attached to motorcycles) and rickshaws imported from India. Cyclos are unique to Cambodia in that the cyclist sits behind the passenger(s) seat, as opposed to cycle rickshaws in neighbouring countries where the cyclist is at the front and pulls the carriage. With 78% mobile phone penetration rate, ride-hailing apps have become popular in recent years. The first locally owned ride-hailing app, ExNet taxi app, was launched in 2016, after which another locally developed PassApp taxi was also introduced.

The ExNet and PassApp use the same technology and architect for their application, except that ExNet is a taxi-based ride-hailing service while PassApp is more of rickshaw-based one. Uber and Grab joined the market in 2017. The entry and later merger of Uber and Grab did not negatively affect the local apps as the locals have the first-mover advantage and could secure a large number of patrons. As of today, PassApp is seen as an able competitor for the Singapore-based Grab in the Cambodian transport market.

Aside from the private-hire vehicles and ride-hailing service, public transport is also available but only in the capital. Phnom Penh city bus service started in 2015 with only three routes under the assistance of JICA. Today, Phnom Penh City Bus operates 13 routes.

From Wikipedia:Transport in Cambodia § Waterways

The nation's extensive inland waterways were important historically in domestic trade. The Mekong and the Tonlé Sap Rivers, their numerous tributaries, and the Tonlé Sap provided avenues of considerable length, including 3,700 kilometers navigable all year by craft drawing 0.6 meters and another 282 kilometers navigable to craft drawing 1.8 meters. In some areas, especially west of the Mekong River and north of the Tonle Sap River, the villages were completely dependent on waterways for communications. Launches, junks, or barges transport passengers, rice, and other food in the absence of roads and railways.

According to the Ministry of Communications, Transport, and Post, Cambodia's main ferry services crossing the Bassac River and the middle Mekong River were restored in 1985. The major Mekong River navigation routes also were cleared for traffic. Seaplane service to all waterways and islands in now offered by Aero Cambodia Airline.

Open Development Cambodia (ODC) is an 'open data' website, the first of its kind in Southeast Asia. The open data movement is based on the simple premise that data collected for public interest should be publicly available without restrictions. Information or data in the public domain should be freely available to everyone to use and republish as they wish. Open Development Cambodia does not promote any particular perspective, agenda or bias other than to provide objective information about Cambodia and its development.

Cambodia: Pushing for a more organic future,[3] February 18. Bloggers at CAAI News Media and Khmer Stars feature a Phnom Penh Post article on the slow food movement that ran on February 10. The article discusses Slow Food's philosophy of creating food in a good, clean and fair manner and how that philosophy is applied in Cambodia.