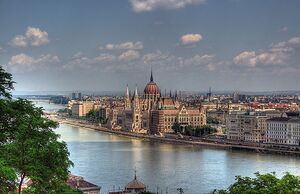 Hungary (Hungarian: Magyarország [ˈmɒɟɒrorsaːɡ] (listen)) is a landlocked country in Central Europe. Spanning 93,030 square kilometres (35,920 sq mi) of the Carpathian Basin, it is bordered by Slovakia to the north, Ukraine to the northeast, Romania to the east and southeast, Serbia to the south, Croatia and Slovenia to the southwest, and Austria to the west. Hungary has a population of nearly 10 million, mostly ethnic Hungarians and a significant Romani minority. Hungarian, the official language, is the world's most widely spoken Uralic language and among the few non-Indo-European languages widely spoken in Europe. Budapest is the country's capital and largest city; other major urban areas include Debrecen, Szeged, Miskolc, Pécs, and Győr.

Phytogeographically, Hungary belongs to the Central European province of the Circumboreal Region within the Boreal Kingdom. According to the WWF, the territory of Hungary belongs to the terrestrial ecoregion of Pannonian mixed forests. It had a 2019 Forest Landscape Integrity Index mean score of 2.25/10, ranking it 156th globally out of 172 countries. W

How much having a "place" for hubsters makes a difference? Jul 21[2]

A story across Transition borders, How the "green" and the "marginalized" can become allies, Jul 15[5]

Talking about REconomy in Hungary, Jul 12[6]

Make universities, students and communities work together – a how-to, Jun 27[7]

A her-story of Transition Wekerle: an experience of local community activism in Hungary, Dec 14[9]

'Small is Powerful': Transition in action in Hungary. September 14[10]

Last month the do-it-yourself non-profit bicycle cooperative Cyclonomia teamed up with an organic vegetable farm called Zsámboki Biokert and Kantaa a mainly cargobike-focused bike messenger enterprise to cooperate in work and build communities upon the ideas they believe in. Cargonomia is aimed not to be only a fruitful business co-op but also an example to promote environmentally conscious transport and food production solutions to citizens and businesses.

The model leans on the distribution of bio food grown in farms near Budapest to costumers in the city on cargo bikes which are maintained and built by the Cyclonomia community.

As a community centre they are planning numerous activities such as cultural events, workshops, discussions on DiY culture, sustainable transitions and the idea of degrowth.

The centre which was opened in May was acquired through the 'Lakatlan' project of KÉK (Contemporary Architecture Centre) which aims to revitalise empty buildings, shops and properties in Budapest with community activities and businesses.

The Budapest bike movement is back and bigger than ever, May 17[12]

How a house with 120 flats turned its concrete-covered courtyard into a lovely garden, March 8[13]

The Invisible Marsh,[16] January 26. Marietta Le reports on the story of one of Hungary's most successful citizen campaigns, whose goal is to save an endangered marsh by preventing an allegedly illegal expansion of a shopping center.

Page data
Retrieved from "https://www.appropedia.org/w/index.php?title=Hungary_community_action&oldid=668809"
Cookies help us deliver our services. By using our services, you agree to our use of cookies.
Categories:
About Appropedia · Policies · Contact · Content is available under CC-BY-SA-4.0 unless otherwise noted.