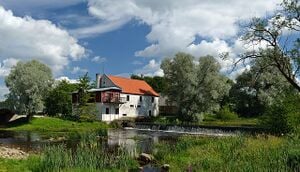 Estonia, formally the Republic of Estonia, is a country by the Baltic Sea in Northern Europe. It is bordered to the north by the Gulf of Finland across from Finland, to the west by the sea across from Sweden, to the south by Latvia, and to the east by Lake Peipus and Russia. The territory of Estonia consists of the mainland, the larger islands of Saaremaa and Hiiumaa, and over 2,200 other islands and islets on the eastern coast of the Baltic Sea, covering a total area of 45,339 square kilometres (17,505 sq mi). The capital city Tallinn and Tartu are the two largest urban areas of the country. The Estonian language is the autochthonous and the official language of Estonia; it is the first language of the majority of its population, as well as the world's second most spoken Finnic language.

From Wikipedia:Wind power in Estonia

As of 2020, Estonia has a wind power installed capacity of about 320 MW. All operational wind farms in the country are on land. Offshore wind farms are planned on Lake Peipus and in the Baltic Sea near the island of Hiiumaa.

FREEN OU and Eleon AS are Estonian wind turbine manufacturing company which provides services for the development of distributed power generation systems. FREEN production capacity of the plant is 4000 units per year. The production is concentrated in Estonia with the focus on the world market, and the small wind turbines manufacturing affects the energy cost worldwide.

Electric vehicles: Estonia is the first country in the EU and in the world to introduce a nation-wide, publicly serviced charging system for charging the batteries of electric vehicles. The 165 fast charging stations are equipped with connectors of the CHAdeMO standard. They are located throughout the entire country, including the islands, and have a maximum distance of 40–60 km in between. The charging stations can also be navigated via a smartphone app (currently only for Android). The relatively dense network and 30 minute quick charges are built to enable a country-wide electric vehicle network. The system offers a unitary booking service and several different tariffs, some of which appear attractively low priced. The charging station network puts Estonia at the forefront in Europe even though Norway actually has a higher penetration of electric vehicles. Estonia has a rate of 1 electric vehicle per 1000 capita, whereas Norway has 4 EVs per 1000 capita.[1]

Estonia one of three European Union member countries that have already met their renewable energy goals for 2020, March 12[2]

One year of free public transport in Tallinn, February 19[3]

The Largest Free Mass Transit Experiment in the World, January 29[4]

Page data
Retrieved from "https://www.appropedia.org/w/index.php?title=Estonia_community_action&oldid=668799"
Cookies help us deliver our services. By using our services, you agree to our use of cookies.
Categories:
About Appropedia · Policies · Contact · Content is available under CC-BY-SA-4.0 unless otherwise noted.