Effects of snow on photovoltaic performance

From Appropedia
Project data
MOST

Photovoltaic solar cell systems represent one of the most promising means of maintaining our energy intensive standards of living.[1] open access With Canada, and Ontario in particular, concentrating a much larger focus on photovoltaic development, there is a keen interest and concern in the effects of snow cover on solar energy yield. From small scale residential to large multi-MW ventures, developers are interested in the effect of snow on the performance of different types of panels and on the optimization of racking angles.  There have been very few comprehensive studies performed which attempt to quantify the effects of snowfall, and none which provide universally applicable estimations of snow related losses. Thus, the first goal of this study is to attempt to gain a better understanding of the effects of snowfall on PV performance, and to provide some recommendations for reducing these losses.

In response to this, a project has been initiated to investigate the practical performance of commercial PV panels in the Ontario climate. As such a large outdoors test site is being commissioned as a collaboration between the Queen's Applied Sustainability Group (ASG) and St. Lawrence Sustainable Energy Applied Research Centre (SEARC) in order to provide highly accurate and practical data on PV performance year round. This site is being used in addition to the Queen's Innovation Park test site originally commissined by Queen's Applied Sustainability group and sponsored by Sustainable Energy Technologies Beyond providing practical information to industry and a test platform for advanced PV system design research the system will also be integrated into the curriculum of the ESAT program St.Lawrence College, helping to train the next generation of PV installers and developers.

The data collected from this project will lead the development of a model which will predict the annual losses due to snowfall for arrays set at a variety of angles. This information will allow developers to make more informed decisions when installing photovoltaic arrays in northern climates. In addition, testing capabilities being developed can be applied to future practical outdoors evaluations of panel performance.

In a global sense, the implementation of solar photovoltaics for grid-tied power generation applications is increasing at a rapid pace as recognition that this technology can provide an abundant and environmentally friendly energy source. At the moment the pattern of implementation of photovoltaics is governed in some part by government support offered by countries around the globe, at a variety of latitudes which are not necessarily the ideal equatorial regions where solar resource is maximized. As such, in 2010 74% of all installed PV resources were in countries which experience some amount of snowfall, with the top four countries for PV installations being Germany, Italy, USA, and Japan.

The Effects of Snowfall on Solar Photovoltaic Performance[edit | edit source] 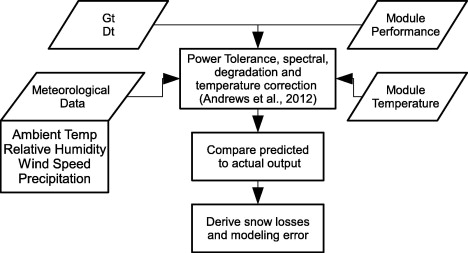 Solar photovoltaic (PV) systems are frequently installed in climates with significant snowfall. To better understand the effects of snowfall on the performance of PV systems, a multi-angle, multi-technology PV system was commissioned and monitored over two winters.

It was found that the losses due to snowfall are dependent on the angle and technology being considered and the effects of increased albedo in the surroundings of a PV system can increase expected yields, particularly in the case of high tilt angle systems. Existing methods for predicting losses due to snowfall were investigated, and were found to provide overly conservative estimates of snow losses. Overall the results show that the proper assessment of snow related losses can help improve system performance and maintenance. It is concluded that proper characterization of the snowfall effect on PV system performance can influence better systems optimization for climates experiencing snowfall. 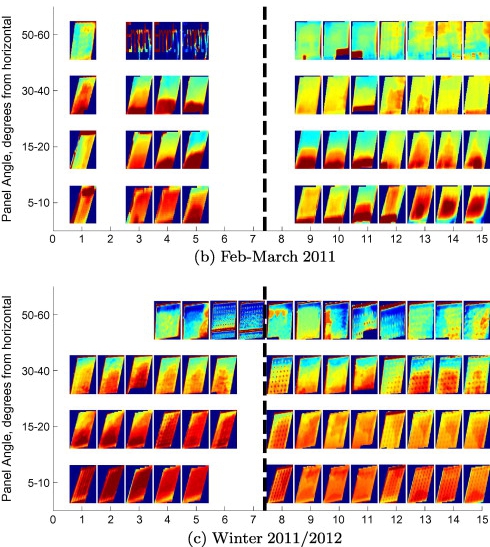 This report was compiled by Michael Ross, while working at Renewable Energy Research in Montreal, Quebec in 1995. It is a very comprehensive report which outlines a very detailed thermal model of a PV panel covered with snow. This report also summarizes very well the theory behind snow cover and provides an excellent review of snow properties as they relate to PV systems. It also includes the C++ code for a simulation program which attempts to predict panel temperatures as a function of time when covered with snow, and to use this information to determine the approximate times that a panel will remain covered with snow. Though this simulation provides an indication of the relative importance of a variety of factors on PV panel snow shedding, the actual accuracy of the model is poor. One issue with this model is its snow clearing assumption which states that when a panel reaches 0Â° it will clear itself, as water will have been formed. However, it is not apparent how much water must be melted to initiate sliding, and what effect angle has on this relationship.

An approach to the impact of snow on the yield of grid connected PV systems,[3][edit | edit source]

This report was compiled by the Bavarian Association for the Promotion of Solar Energy and is an analysis of snow losses on a 1MW roof mounted array in Germany at an incline of 28 degrees. The major findings from this report are that snow clearing can occur at panel temperatures as low as -10 degrees C, and that snow losses can range from 0.3% to 2.7% for this type of system, based on six years of data.

This study, performed in 1979 consists of a study has a method performed which is very similar to the current study investigation. Visual monitoring and pyranometer data were used to determine daily snow losses on a photovoltaic array angled at 30 and 40 degrees, the test apparatus is shown in Figure 4.

Unfortunately, due to data acquisition errors and the use of non-heated pyranometers, half of the data points were rejected making it very difficult to determine total yearly losses. The daily losses were calculated by comparing the measured PV output to the output from an ideal day, determined by multiplying the global irradiation by a factor (in this case 1/5.5) to find ideal PV output based upon data from snow-free PV responses. Using thse techniques, the yearly losses in 1979 for a 30 degree system were estimated at 2.0 % and for a 40 degree system were estimated as 0.84%, however there is a degree of uncertainty associated with this data set.

A preliminary study has been performed in 2009-2010, funded by Sustainable Energy Technologies and located at Queen's Innovation Park, and consists of 16 panels mounted at angles from 0 to 70 degrees, with two each at increments of 10 degrees. 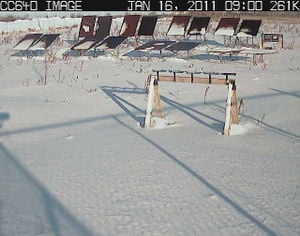 By monitoring panel output, solar influx, snow fall and meteorological factors a loss due to snowfall can be determined for a general system at a variety of angles. In addition, thermal panel measurements lead to a better understanding of snow shedding mechanisms. A series of analysis algorithms have been developed which allow for constant data mining to determine factors such as snow coverage ratio using image analysis, performance ratio, and estimated losses/gains due to snowfall. A detailed description of the sensors and measurements used in the study can be seen at Queen's Innovation Park Test Site.

The SEARC Open Solar Outdoors Test Field consists of two discreet test beds, the largest of which is located on the roof of the new Wind Turbine and Trades building at St.Lawrence College and which has room for 60 commercial PV panels, which are divided between eight angles of 5.10,15,20,30,40,50 and 60 degrees. 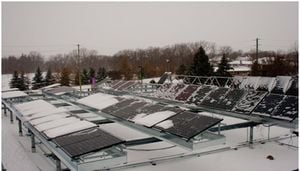 Overview of OSOTF site as of January 2011

The SEARC outdoors test field is designed to be a state of the art outdoors test facility which makes this site one of the premier PV test beds in North America.The capabilities of this test bed are shown in the following table.

This study offers a very detailed dataset for determining snow related losses for the two panels being utilized. However an expansion of this study would allow for a broader accumulation of datasets, and would result in a much more robust model. If you are interested, please contact Joshua Pearce.

In addition, though the first application of the SEARC Outdoors test field is to monitor the effects of snowfall on PV systems, this testing apparatus will be used in the future to perform technology comparisons and to expand knowledge in the field of practical PV system installation. We are always interested in expanding our base of research and if you are interested in collaboration, please contact Joshua Pearce or SEARC.

Page data
Retrieved from "https://www.appropedia.org/w/index.php?title=Effects_of_snow_on_photovoltaic_performance&oldid=639805"
Cookies help us deliver our services. By using our services, you agree to our use of cookies.
Categories:
Maintenance categories:
Comments
Privacy policy · About Appropedia · Disclaimers · Mobile view · Content is available under CC-BY-SA-4.0 unless otherwise noted.
</html