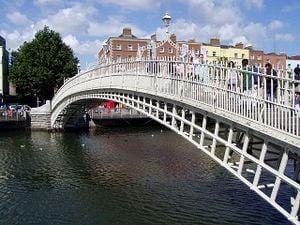 Dublin is the capital and largest city of Ireland. Situated on a bay on the east coast, at the mouth of the River Liffey, it lies within the province of Leinster. It is bordered on the south by the Dublin Mountains, a part of the Wicklow Mountains range. It has an urban area population of 1,173,179, while the population of the Dublin Region (formerly County Dublin) as of 2016 was 1,347,359. The population of the Greater Dublin Area was 1,904,806 per the 2016 census.

Dublin is a historical and contemporary centre for education, the arts, administration and industry. As of 2018 the city was listed by the Globalization and World Cities Research Network (GaWC) as a global city, with a ranking of "Alpha −", which places it amongst the top thirty cities in the world. W

Dublinbikes - Dublin Cycling Campaign, independent, voluntary cycling advocacy group that has been working to improve the city for all cyclists since 1993.

The 2011 Census showed that 5.9 percent of commuters in Dublin cycled. A 2013 report by Dublin City Council on traffic flows crossing the canals in and out of the city found that just under 10% of all traffic was made up of cyclists, representing an increase of 14.1% over 2012 and an 87.2% increase over 2006 levels and is attributed to measures, such as, the Dublinbikes bike rental scheme, the provision of cycle lanes, public awareness campaigns to promote cycling and the introduction of the 30 km/h city centre speed limit.

Dublin City Council began installing cycle lanes and tracks throughout the city in the 1990s, and as of 2012 the city had over 200 kilometres (120 mi) of specific on- and off-road tracks for cyclists. In 2011, the city was ranked 9th of major world cities on the Copenhagenize Index of Bicycle-Friendly Cities. The same index showed a fall to 15th in 2015, and Dublin was outside the top 20 in 2017.

Dublinbikes is a self-service bicycle rental scheme which has been in operation in Dublin since 2009. Sponsored by JCDecaux and Just Eat, the scheme consists of hundreds of unisex bicycles stationed at 44 terminals throughout the city centre. Users must make a subscription for either an annual Long Term Hire Card or purchase a three-day ticket. As of 2018, Dublinbikes had over 66,000 long-term subscribers making over 2 million journeys per year.

ReusingDublin, sharing information about vacant or underused spaces in Dublin

Cyclists have begun to outnumber cars in parts of Dublin city, Jan 10[1]

Car lanes to be given to walkers and cyclists on Dublin's quays, November 9[5]

Dublinbikes scheme launched,[6] September 13. 450 bikes will be available at 40 bike stations located in the city centre.