From Appropedia
Redirected from Channel Islands 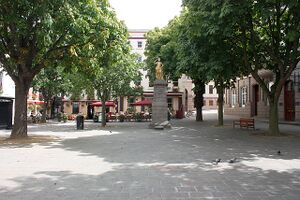 The Channel Islands (Norman: Îles d'la Manche; French: îles Anglo-Normandes or îles de la Manche) are an archipelago in the English Channel, off the French coast of Normandy. They include two Crown Dependencies: the Bailiwick of Jersey, which is the largest of the islands; and the Bailiwick of Guernsey, consisting of Guernsey, Alderney, Sark, Herm and some smaller islands. They are considered the remnants of the Duchy of Normandy and, although they are not part of the United Kingdom, the UK is responsible for the defence and international relations of the islands. The Crown dependencies are not members of the Commonwealth of Nations, nor have they ever been in the European Union. They have a total population of about 170,499, and the bailiwicks' capitals, Saint Helier and Saint Peter Port, have populations of 33,500 and 18,207, respectively.

"Channel Islands" is a geographical term, not a political unit. The two bailiwicks have been administered separately since the late 13th century. Each has its own independent laws, elections, and representative bodies (although in modern times, politicians from the islands' legislatures are in regular contact). Any institution common to both is the exception rather than the rule.

From Wikipedia:Transport in Jersey § Cycling

Jersey has infrastructure dedicated to cyclists. Cycle infrastructure has been improving in the previous decade under the Sustainable Transport Policy.

The best developed cycle route is the route from St Helier to Corbière. The route consists of segregated cycle paths and shared pedestrian-cycle paths, including the St Aubin's Bay promenade and the Railway Walk. The connection from West Park to Havre des Pas was completed an upgraded after a ministerial decision in 2011. A branch of this route connects to St Peter's Village via Les Quennevais.

There is a segregated cycle-pedestrian path along St Peter's Valley, which connects pedestrians and cyclists from the green lane network in St Mary to roads near the St Aubin's Bay Promenade cycle route. It was opened in 2016.

Jersey has a network of signposted cycle routes. There are fifteen routes in total, such as route 1, which forms a loop around the island. Most of the routes are on quieter lanes and dedicated paths, however some of these routes are on busy main road with no dedicated infrastructure.

The Eastern Cycle Route network is a proposed network of cycle-safe routes in the eastern parishes of St Clement and Grouville. The first section from Gorey to La Ville-ès-Renauds in Grouville was opened in 2011.

There is a dedicated network of Green Lanes across the island, which have a 15 mph speed limit and where priority is afforded to cyclists.

From Wikipedia:Transport in Guernsey § Cycling

Cycling is encouraged in Guernsey although there are currently few cycle lanes on main roads, the creation of Ruettes Tranquilles provides safer and more pleasant cycle friendly roads.The States of Guernsey provides details of cycling laws and recommendations for safety as well as details of cycle hire businesses.Sark is a popular cycle-friendly island.