From Appropedia
Redirected from Armenia 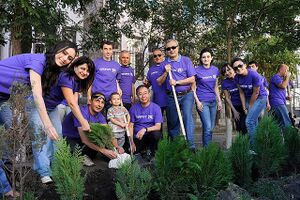 Armenia ( (listen); Armenian: Հայաստան, romanized: Hayastan, IPA: [hɑjɑsˈtɑn]), officially the Republic of Armenia, is a landlocked country located in the Armenian Highlands of Western Asia. It is a part of the Caucasus region; and is bordered by Turkey to the west, Georgia to the north, the Lachin corridor (under a Russian peacekeeping force) and Azerbaijan to the east, and Iran and the Azerbaijani exclave of Nakhchivan to the south. Yerevan is the capital, largest city and the financial center.

Armenia's 2018 rank on Ecosystem Vitality is 27th best in the world. W

Air Quality is a concern. W

From Wikipedia:Solar power in Armenia

Solar energy is widely available in Armenia due to its geographical position and is considered a developing industry.

According to the Ministry of Energy Infrastructures and Natural Resources of Armenia, Armenia has an average of about 1720 kilowatt hour (kWh) solar energy flow per square meter of horizontal surface annually and has a potential of 1000 MW power production. In the capital Yerevan, the average solar energy flux is equal to 1642 kWh/m2. Armenia's area cannot be considered as homogeneous from the perspective of available solar energy: the difference between the amount of solar energy reaching the ground in different places in the country can be up to 20% in the summer time, and 50% in the winter time.

The use of solar energy in Armenia is gradually increasing. In 2019, the European Union announced plans to assist Armenia towards developing its solar power capacity. The initiative has supported the construction of a power plant with 4,000 solar panels located in Gladzor.

Waste management in Armenia is underdeveloped, as no waste sorting or recycling takes place at Armenia's 60 landfills. A waste processing plant is scheduled for construction near Hrazdan city, which will allow for closure of 10 waste dumps. W