The Arcata Educational Farm has been operating as a CSA (Community-Supported Agriculture establishment) in Arcata, California since 1993. This farm allows students, residents, and local farmers to work side-by-side in their efforts to accomplish goals such as sustainable agriculture and valuable work experience. The farm also allows fresh organic produce to be sold as shares to stockholders and members of the organization. As students enrolled in the ENGR305 class, we decided to build an earthen informational kiosk at the entrance of the farm. The earthen wall will be constructed with a cobb base, and will then be coated with an earthen plaster finish. The kiosk will serve not only as an entrance piece to the farm but also as a place to learn about current and past projects constructed at this site. Projects such as the AEF solar water heater, or the AEF spiral herb garden.

Why
The practical purposes of this wall would be to serve as an entrance piece and as a place to obtain information about the farm. Most importantly it would serve as an educational tool based at the farm.

It is a good idea to use as many on-site or nearby materials as possible when working with cobb. Cobb requires a vast amount of materials that are very labor and time-intensive to acquire. Here is a list of the materials you will need: 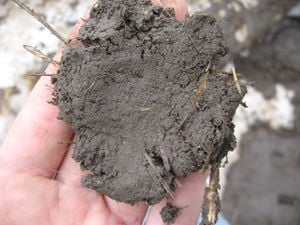 The soil shake test is used to determine how much clay is in the makeup of the soil. This simple process involves filling a glass jar with water and soil which is then shaken vigorously for up to a minute. The jar should be left undisturbed for roughly 24 hours, or until the contents of the jar have completely settled. The sand will settle first at the bottom, with the silt settling second on top of the sand. The clay will take the longest to settle on top of the silt, and the organic materials will float to the top of the water.

Test bricks are constructed to find the best ratio of sand to clay to straw. After the soil shake test has determined the makeup of the soil, the builder will then be able to decide whether to add excess sand or clay to the mixture. One effective method is to make test bricks with more and more sand until the brick no longer holds together, which is a clear indicator of too much sand in the mixture. The builder should make at least three different samples of clay/sand mixtures, which will allow for different amounts of straw to be added accordingly to each brick.

The first thing that needs to be considered when laying a foundation is to have a loose aggregate added directly underneath and around the actual cob wall. We laid crushed gravel under are the foundation to serve as a stopgap, which will keep the immediate area free from becoming muddy during the winter season. After we laid our crushed gravel, we decided to go with a poured cement slab as our foundation. We first needed to build and align a form that served as retaining walls for our poured cement. Once we built the form, we evened out the gravel area using a level and hammered numerous 18-inch stakes around the perimeter. We than poured approximately six inches of cement into our securely held form, and allowed it to dry for 72 hours. Once the slab had dried, we removed the form by hammering each board away from the slab which left us with a rectangular slab of cement that was 5 feet long, 15 inches wide, and 6 inches deep.[2]

Myself [Drew[1]] and project partner [Annika[2]] visited the Bayside Park Farm during the second week of October. During this visit, we evaluated the current condition of this project. Unfortunately, the info kiosk described in this project posting no longer exists at the farm. After talking with current Co-Farmers Jayme and Leandra, we were able to gather some information about the unsuccessful project. What we now know is that this project was never fully executed and it is believed that the leaders ran into proposal issues with the city. We are still unsure if the wall was ever finished because Jayme told us that before the wall was removed it had become very moist/soft and began to collapse. This absorption of moisture may suggest that either a) the wall was never finished or b) the lime plaster that is mentioned above may not have been the best protective shell for this wall constructed of natural material. In short, the natural material info kiosk is gone and has been replaced by a wooden information kiosk. Please refer to the photo below to see the current kiosk. This new kiosk is primarily used to inform the public and farmers about the community garden side of the farm. 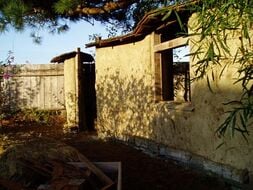 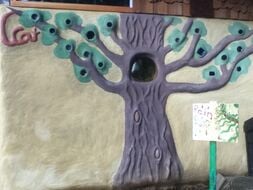 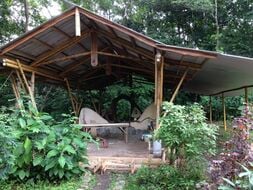 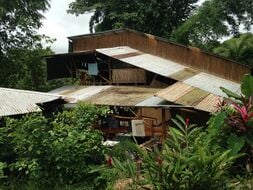 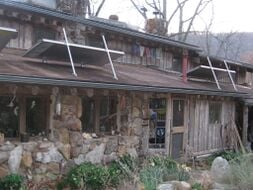