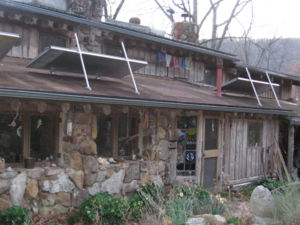 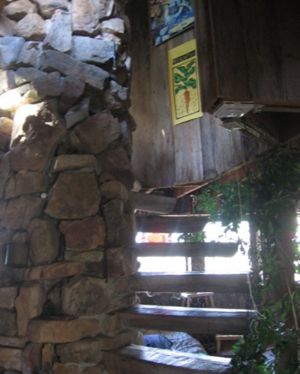 Stairs built with cantilever construction, the only support is inside the stone pillar.

Sequatchie Valley Institute is a community in Sequatchie Valley, Tennessee, USA. It started as a homestead in 1971, when Carol, Johnny and their children moved onto the land and began making it their home. A log cabin was built first. A main house was constructed later using knowledge from Firefox books and taking ideas from Frank Lloyd Wright{wp sup| Frank Lloyd Wright}}. Much of the main house was designed with cantilever construction, taking some of Wright's design of a beam bearing a load without supports on both ends.(Cantilevers are cool). The big house has become the community center. A huge kitchen feeds everyone in the community and a greenhouse attached to the kitchen benefits from the heat of culinary efforts. A large living space and childrens playroom is on the other side of the house, and upstairs is the office for SVI and Moonshadow Programs and Carol and Johnny's living space. 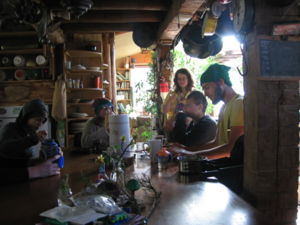 The kitchen with the greenhouse in the back

Only recently has SVI become a community and institute, with interns and friends living somewhere on the 300 acres in cobb houses, alternative structures and a tipi. Several of the cobb structures were built by earth building workshops held at SVI. Decisions are made by community meetings every morning, and the sense of community is incredibly strong among the 10 to 15 people who live there. Here are some of the other structures people in the community live in.

Some other cobb structures[edit | edit source]

It's a really incredible place and for a better written and more comprehensive description, please check them out online. SVI online I traveled there in April 2006 with an environmental sustainablity service group and spent some time there camping out. They love showing people what they are all about, and have many many MANY more awesome things about them (stained glass creation, pottery, greenhouses, one man sawmill, llamas, permaculture gardens, vineyard)

This isn't Sequatchie Valley Institute, but this another really sweet place in Tennessee we also visited. The Farm was started by acidheads and hippies (self proclaimed as such) in the 1970's, when Stephen GaskinW and his followers decided to stop caravaning around the U.S. The idea of the Farm was to be one big community that shared everything- from food to religion to child raising, a huge commune. It's evolved into more private ownership nowadays, but they have tons of programs going on, a printing press and village shop. We stayed in the ecovillage, worked with cobb and in the organic garden. I'm going to put up some pictures of the cobb, but otherwise check out more about the Farm at this external link: the Farm

This is the Green Dragon, the biggest cobb construction in the Ecovillage. We dug up the earth, sifted out our own clay, mixed it all up and slapped it on.

Heres some other structures in the Eco-village

And thats just about it. Good people living sustainably and giving back to the earth. 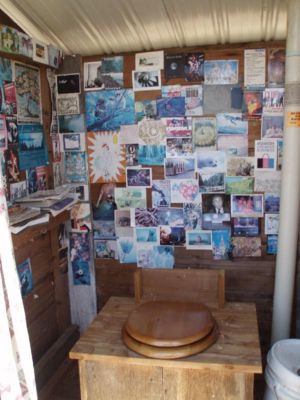