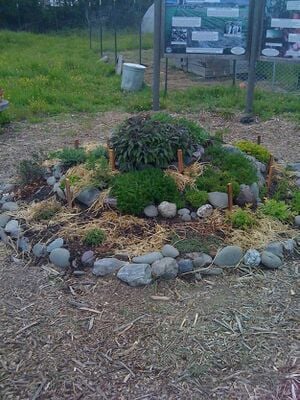 The Arcata Educational Farm was established in 1993 and is located in Bayside Park at 930 Old Arcata Road. The AEF farm functions by allowing members of the public to purchase shares of the farm, thereby enabling shareholders to take home a portion of the farm's vegetables when they are harvested. This method of operation is known as Community Supported Agriculture development or (CSA). The mission of the AEF, according to their Appropedia page, is to increase "sustainable agriculture awareness and give people in Arcata the ability to gain work experience related to community farming." Recently the Arcata Educational Farm has requested that their existing herb spiral be revamped. An herb sprial is a type of herb garden which is constructed to promote drainage of the water away from the plants at the top of the spiral and accumulation of water at the base of the spiral. An herb spiral also allows the gardener to take into consideration which herbs prefer full sun and which prefer shade. Currently the herb spiral at the AEF provides a small amount of herbs for shareholders which can be used for both cooking and medicinal purposes.  My objective was to plant a variety of herbs so that shareholders have more choices of which herbs to take home. Revamping the herb spiral was also an artistic endeavor. It is located at the entrace to the garden and is surrounded by benches where employees and volunteers can rest during breaks.  Because of this it is important that the herb garden be functional as well as aestetically pleasing.

Who: Megan Shelley, Engineering 305 student at Cal Poly Humboldt. The client for this project is the AEF farm as well as the community members who hold shares in the AEF farm. I was also assisted by Corey Lewis of HSU.

What: The objective was to restore the existing herb spiral by adding medicinal and culinary herbs. Before the project the herb spiral contained only two types of sage, one tarragon, one chamomile, four varieties of thyme, and one skullcap. The herbs I added were two garlic, two varieties of yarro, chives, parsley, a variety of mints, feverfew, four varities of oregano, lemonbalm, stevia, and marjoram. I also added soil and stones to the spiral, labeled the herbs, and constructed a sign for the herb spiral. 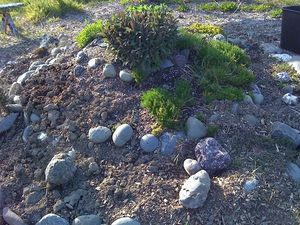 Why: To increase the number of herbs available for shareholders to harvest for their personal use and also to function as an ornamental garden. The herb spiral also has two educational purposes: the spiral shape demonstrates an approach to gardening known as permaculture, and the selection of materials demonstrates appropriate technology.

Humboldt County has a very temperate climate; there is only a 10 degree Fahrenheit variation from winter to summer due to its location near the Pacific Ocean. There is a significant amount of rain fall in Humboldt County which may vary anywhere from 10 to 40 inches per year..[1] The Köppen climate classification system classifies Humboldt County as a Mediterranean climate, and therefore herbs native to Mediterranean regions will most likly grow well here.[2]

An herb spiral is a special herb garden design that allows the gardener to form different microclimates so that a variety of herbs can be grown in a small space. In the spiral the herbs which prefer full sun and well drained soil (such as rosemary) can be planted at the top of the spiral, and those which prefer moist soil (mints) can be planted at the base of the spiral. This works because water will natually drain to the lowest point. The four directions are also utilized in the spiral. Herbs that prefer full sun can be planted on the south and west sections of the spiral and those that prefer partial sun at the north and east sections..[3] There are a variety of techniques that can be applied when constructing an herb spiral. Gaia's Garden suggests that a mound be constructed with good soil and then rocks laid down in order to form a spiral shape.[4] Another technique is building the spiral using rocks or bricks and filling it with soil as it is built up. My Urban Gardener suggests that the rocks should spiral down from the center in a clockwise direction in the northern hemisphere and in a counterclockwise direction in the southern hemisphere (this is because water naturally drains in these directions.) Other alternatives are filling the spiral with sand or gravel increase drainage and add support to the spiral. One should be able to comfortably reach the herbs at the center of the spiral, therfore it should be about one meter tall and have about a one meter radius.[5]

When I met with the staff at AEF for the first time I was encouraged to incoporate permaculture into the herb spiral. The term permaculture was coined in the 1970's in Australia by Bill Mollison and David Holmgren as a combination of the words "permanent" and "agriculture." Today this term is no longer just and agricultural reference and has been expanded to mean "permanent culture.".[6]

After researching permaculture and a peer reviewed article I found that perennials contribute more to the environment than annuals. Perennials are plants that can live for more than one year, while annual plants live only for one season. Perennials are able to sequester more carbon than annuals.[7] Perennials also have deeper root systems than annuals so they are able to tap into deeper water and nutrient resources in the soil. Perennials come back year after year, so unlike annuals perennials can save time and energy for the gardener because one does not have to worry about replanting every year. Also perennials have a larger biomass than annuals and therefore when they are harvested there is still some of the plant left over which can continue to serve as a home for critters.[8]

The herb spiral at AEF has a radius of 4.5 ft and a height of 22 inches.  The slopes of each direction are as follows:

This means that the slopes at each of the four directions on the mound are relativly even, and water will not readily accumulate on one particular side.

Origninally I anticipated that I may need to plant a large quantity of herbs in order to supply all the shareholders with an adequate amount. However, I learned that AEF is planning on constructing a perennial herb garden in the spring of 2010. I have therefore not weighted the herb production constraint as heavily as I had originally anticipated.

The cost for the herb spiral could have been greatly reduced if I had been able to obtain some herb starts by division, instead of purchasing all of the starts.

Because the Arcata Educational Farm already had a constructed herb spiral it was my job to plant herbs in their corresponsing microclimates. In order to do this I needed to first determine the north, south, east and west. Because I do not own a compass I used a technique called a shadow compass.[10]

When planting I used the soil which was already in the spiral and also added some top soil. For the topsoil I used a combination of compost and sand (provided by AEF). The location of the herb spiral at AEF is very sunny, although this is preferable for herbs[11] I wanted to find a way to conserve at much water as possible, so that we would minimize human labor and prevent the herbs from drying out while they were becoming established. In order to do this I built little swales into the garden. A swale is a shallow trench which holds water, thereby minimizing the amount of water lost as runoff. After I had planted all my herbs I watered the spiral thoroughly to settle it. I then added a little more topsoil. After I had finished planting I covered the soil around the plants with straw from the AEF. This served as a mulch so that the herbs stayed moist.[12] 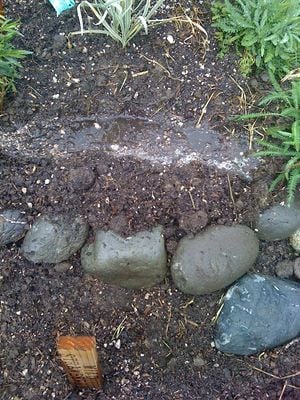 A wood burning tool which I purchased online was used for the lettering on the individual herb signs. I used acrylic paint for the "Herb Spiral" sign at the entrace to the AEF herb spiral.

One of the biggest benefits of a spiral herb garden as opposed to a flat herb garden is the ability of the gardener to create microclimates. After researching the plants I chose the following locations for my herbs.

The parsley which was originally planted in the lowest tier on the south east side of the spiral was eaten by the chickens.  This was replaced by the AEF staff with extra pineapple sage and peppermint. These two plants typically would not fair well at this end of the spiral, it is too sunny for the mints and too wet for the sage. I solved this problem by adding extra straw mulch around the mints and because it is on the sunny south side of the spiral the soil has remained relativly dry for the sage. Both herbs are doing well at time of writing. This design is not a traditionaly spiral; each of the three tiers are equal all the way around the spiral. This design prevented the bottom level from becoming moist in comparison to the other two levels. I added extra mulch to this level to increase the drainage. The fennel was not doing well possibly because the soil was too moist and possibly of a lack of nutrients, therefore I added extra compost. Thyme previously was planted to mark the four corners, and I added extra thyme to the north side of the spiral due to the fact that the thyme in that location appeared to being doing the best out of any of the directions.

When I began this project I knew practically nothing about gardening. Although this project required a lot of time and effort, I am glad that I did it. I would like to thank the staff and volunteers at AEF for allowing me to work with them; it is a great organization for the community and for HSU students. I learned a lot about permaculture and I am looking forward to incorporating some of those philosophies into my own life. I learned about making compost, mulching, and I now can identify many different herbs. One of the biggest things that I will take away from this experience is that things do not have to be complex, elaborate, or expensive to be effective. 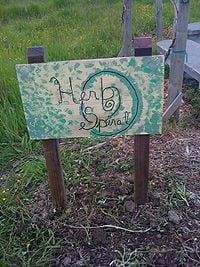 For a small research project, my classmate [Drew[1]] and I [Annika[2]] went out to the Bayside Park Farm to collect enough information to update their Appropedia project pages. Our findings for the spiral herb garden were that; it was not the same garden it was in May, 2010. It was no longer a spiral and did not have the variety of herbs described on this Appropedia page. We found out from farmers Jayme and Leandra that it never fully took on the micro climates it was supposed to and water drainage from the top of the mound also did not quite work as expected. There were issues encountered with weeds and mint overgrowth, which made maintaining the herb spiral difficult. Eventually, the herb spiral was flattened out and as of now (October, 2013) it is more of an "herb mandala." Being; a place for farmers to plant their herbs, but without the added benefit of micro climates for certain herbs. When discussing the issue with farm volunteers they said that next time they attempt the herb garden it would need to be executed and maintained better. 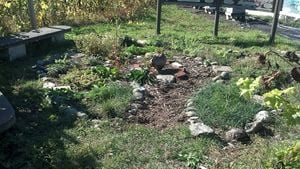 This project was re-made at Bayside Park Farm herb spiral as seen in Figure 23. 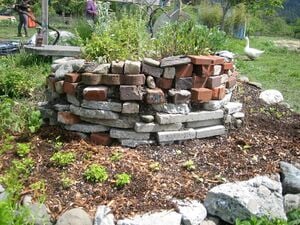