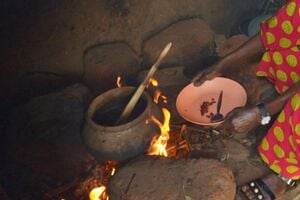 In addition to using additional stones as windbreaks and to increase the thermal properties of the cooking fire, it is also possible to burn the fuel more efficiently, using three pieces of wood, and pushing them slowly into the fire, burning only the ends of the sticks.[1]

Use in the developing world[edit | edit source]

Rural cultures around the world depend on the three rock fire for their cooking needs. Although more efficient than the open fire (in which the cooking pot or container is generally hung well above the fire), it is still an inefficient method of cooking and thus places the environment in jeopardy. This as over-harvesting of fuel for cooking can cause damage to vegetation and wildlife. Understanding traditional cooking methods can help explain why improved solid biofuel stoves are an important appropriate technology. "Most cooking fires are surrounded by three of more stones, bricks, mounds of mud of lumps of fireproof material – thus the common name of three rock fire"[2]

Three rock fires have benefits not found on improved stoves such as:

Because of these benefits, open fire possesses important advantages compared to an improved stove. If the other functions of the three rock fire are not replicated with its replacement, then the improved stove is not being judged and evaluated fully.

If the fire is used to provide heat or light at times when cooking is not taking place, then its efficiency can hardly be judged only on the basis of how well it heats pots.
— Foley, G., P. Moss, and L. Timberlake. 1984.

The most important concern with traditional three rock fires is indoor air quality. Biomass fuels release large amounts of air pollutants when burned on traditional three rock fires. These pollutants become concentrated in inadequately ventilated homes and dwellings. "Several recent studies have identified prolonged exposure to biomass smoke as a significant cause of human health problems."[4] Biomass burned on three rock fires produces harmful soot and ash that become concentrated when confined inside a dwelling, resulting in harmful indoor air conditions. "According to recent estimates by the World Health Organization, up to 1.6 million women and children die every year from breathing polluted air in their homes."[5] Respiratory and vision problems occur in mostly women and children because they spend significant time indoors tending to cooking fires.

The third critique of traditional wood fires is childhood burns. "Burns are quite common in homes using fire and can be fatal or horribly disfiguring."[3]Children can easily fall into the fire because traditional wood fires are located on the floor. Burns disfigure and scar their victim and the experience can be very painful for the child.

Page data
Retrieved from "https://www.appropedia.org/w/index.php?title=Three_stone_cooking_fire&oldid=644941"
Cookies help us deliver our services. By using our services, you agree to our use of cookies.
Category:
About Appropedia · Policies · Contact · Content is available under CC-BY-SA-4.0 unless otherwise noted.