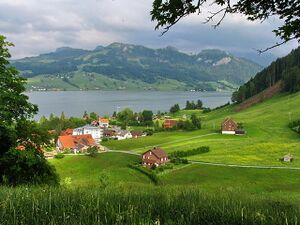 Switzerland, officially the Swiss Confederation; (German: Schweiz [ʃvaɪ̯t͡s], French: Suisse [sɥis], Italian: Svizzera [ˈzvit.t͡se.ra]), is a landlocked country located at the confluence of Western, Central and Southern Europe. It is a federal republic composed of 26 cantons, with federal authorities based in Bern.

The 2000-watt society is an environmental vision, first introduced in 1998 by the Swiss Federal Institute of Technology in Zürich (ETH Zurich), which pictures the average First World citizen reducing their overall average primary energy usage rate to no more than 2,000 watts (i.e. 2 kWh per hour or 48 kWh per day) by the year 2050, without lowering their standard of living.

The concept addresses not only personal or household energy use, but the total for the whole society, including embodied energy, divided by the population.

It is further envisaged that the use of carbon-based fuels would be ultimately cut to no more than 500 watts per person within 50 to 100 years.

The vision was developed in response to concerns about climate change, energy security, and the future availability of energy supplies. It is supported by the Swiss Federal Office of Energy, the Association of Swiss Architects and Engineers, and other bodies.

The Swiss National Park (Romansh: Parc Naziunal Svizzer; German: Schweizerischer Nationalpark; Italian: Parco Nazionale Svizzero; French: Parc National Suisse) is located in the Western Rhaetian Alps, in eastern Switzerland. It is within the canton of Graubünden, between Zernez, S-chanf, Scuol, and the Fuorn Pass in the Engadin valley on the border with Italy.

It is part of the worldwide UNESCO Biosphere Reserve.

Critical Mass bicycle rides in Switzerland - SwitzerlandMobility, Cycling in Switzerland, with interactive maps for bikers and other information about the national biking network

A plan to save Swiss ski resorts from sprawl, Dec 14[2]

The Results of the Basic Income Referendum in Switzerland, Jun 5[5]

Switzerland's ecosystems can be particularly fragile, because the many delicate valleys separated by high mountains often form unique ecologies. The mountainous regions themselves are also vulnerable, with a rich range of plants not found at other altitudes, and experience some pressure from visitors and grazing. The climatic, geological and topographical conditions of the alpine region make for a very fragile ecosystem that is particularly sensitive to climate change. Nevertheless, according to the 2014 Environmental Performance Index, Switzerland ranks first among 132 nations in safeguarding the environment, due to its high scores on environmental public health, its heavy reliance on renewable sources of energy (hydropower and geothermal energy), and its control of greenhouse gas emissions. In 2020 it was ranked third out of 180 countries. W

Page data
Retrieved from "https://www.appropedia.org/w/index.php?title=Switzerland_community_action&oldid=664874"
Cookies help us deliver our services. By using our services, you agree to our use of cookies.
Categories:
About Appropedia · Policies · Contact · Content is available under CC-BY-SA-4.0 unless otherwise noted.