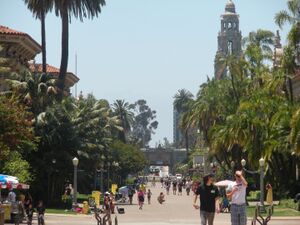 San Diego ( SAN dee-AY-goh, Spanish: [san ˈdjeɣo]; Spanish for 'Saint Didacus') is a city on the Pacific Ocean coast of Southern California located immediately adjacent to the Mexico–United States border. With a 2020 population of 1,386,932, it is also the eighth most populous city in the United States and the seat of San Diego County, the fifth most populous county in the United States, with 3,338,330 estimated residents as of 2019. The city is known for its mild year-round climate, natural deep-water harbor, extensive beaches and parks, long association with the U.S. armed forces, and recent emergence as a healthcare and biotechnology development center. San Diego is the second largest city in the state of California after Los Angeles.

Historically home to the Kumeyaay people, San Diego is frequently referred to as the “Birthplace of California”, as it was the first site visited and settled by Europeans on what is now the U.S. west coast. Upon landing in San Diego Bay in 1542, Juan Rodríguez Cabrillo claimed the area for Spain, forming the basis for the settlement of Alta California 200 years later. The Presidio and Mission San Diego de Alcalá, founded in 1769, formed the first European settlement in what is now California. In 1821, San Diego became part of the newly declared Mexican Empire, which reformed as the First Mexican Republic two years later. California became part of the U.S. in 1848 following the Mexican–American War and was admitted to the union as a state in 1850.

San Diego's main economic engines are military and defense-related activities, tourism, international trade, research, and manufacturing. The city is the economic center of the San Diego–Tijuana conurbation, the second most populous transborder metropolitan area in the Western Hemisphere (after Detroit–Windsor), home to an estimated 4,922,723 people as of 2012. The primary border crossing between San Diego and Tijuana, the San Ysidro Port of Entry, is the busiest international land border crossing in the world outside of Asia (fourth-busiest overall). The city's airport, San Diego International Airport, is the busiest single-runway airport in the world.

In its 2013 ParkScore ranking, The Trust for Public Land reported that San Diego had the 9th-best park system among the 50 most populous U.S. cities. [1]

The dry and mild climate of San Diego makes cycling a convenient and pleasant year-round option. The city has some segregated cycle facilities, particularly in newer developments, however the majority of road facilities specifically for bicycles are painted on regular roadways, covering over 1,570 miles throughout San Diego County. The city's hilly, canyoned terrain and long average trip distances—brought about by strict low-density zoning laws—somewhat restrict cycling for utilitarian purposes. In 2014 of .9% of commuters traveled by bicycle, below the average 1% for large U.S. cities. Also in 2014, San Diego experienced 6.8 bicyclist fatalities per 10,000 cyclist commuters, the average for all large cities was 4.7.

A bicycle sharing system called Decobike was instituted in 2015. W

A sign of global warming, scientists at Scripps Institution of Oceanography say the average surface temperature of the water at Scripps Pier in the California Current has increased by almost 3 degrees since 1950. [7]