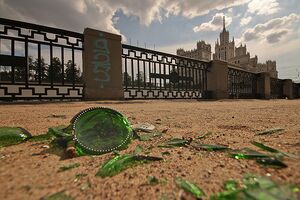 Russia (Russian: Россия, Rossiya, [rɐˈsʲijə]), or the Russian Federation, is a transcontinental country spanning Eastern Europe and Northern Asia. It is the largest country in the world, with its internationally recognised territory covering 17,098,246 square kilometres (6,601,670 sq mi), and encompassing one-eighth of Earth's inhabitable landmass. Russia extends across eleven time zones and shares land boundaries with fourteen countries, more than any other country but China. It is the world's ninth-most populous country and Europe's most populous country, with a population of 146 million people. The country's capital and largest city is Moscow, the largest city entirely within Europe. Saint Petersburg is Russia's cultural centre and second-largest city. Other major urban areas include Novosibirsk, Yekaterinburg, Nizhny Novgorod, and Kazan.

The East Slavs emerged as a recognisable group in Europe between the 3rd and 8th centuries CE. Kievan Rus' arose as a state in the 9th century, and in 988, it adopted Orthodox Christianity from the Byzantine Empire. Rus' ultimately disintegrated, with the Grand Duchy of Moscow growing to become the Tsardom of Russia. By the early 18th century, Russia had vastly expanded through conquest, annexation, and the efforts of Russian explorers, developing into the Russian Empire, which remains the third-largest empire in history. However, with the Russian Revolution in 1917, Russia's monarchic rule was abolished and replaced by the Russian SFSR—the world's first constitutionally socialist state. Following the Russian Civil War, the Russian SFSR established the Soviet Union (with three other Soviet republics), within which it was the largest and principal constituent. At the expense of millions of lives, the Soviet Union underwent rapid industrialization in the 1930s, and later played a decisive role for the Allies of World War II by leading large-scale efforts on the Eastern Front. With the onset of the Cold War, it competed with the United States for global ideological influence; the Soviet era of the 20th century saw some of the most significant Russian technological achievements, including the first human-made satellite and the first human expedition into outer space.

Russia is committed to the Paris Agreement, after joining the pact formally in 2019. It is the world's fourth-largest greenhouse gas emitter. W

According to Russia's Ministry of Natural Resources and Environment, Russia is currently (2015) warming 2.5 times faster than the rest of the globe. W

Russia's entirely natural ecosystems are conserved in nearly 15,000 specially protected natural territories of various statuses, occupying more than 10% of the country's total area. They include 45 UNESCO biosphere reserves, 64 national parks, and 101 nature reserves. Russia still has many ecosystems which are still untouched by man; mainly in the northern taiga areas, and the subarctic tundra of Siberia. W

About half of Russia's territory is forested, and it has the world's largest forest reserves, which are known as the "Lungs of Europe"; coming second only to the Amazon rainforest in the amount of carbon dioxide it absorbs.

Russia had a Forest Landscape Integrity Index mean score of 9.02 in 2019, ranking 10th out of 172 countries; and the first ranked major nation globally. W

From Wikipedia:Energy in Russia § Solar energy

It has been estimated that Russia's gross potential for solar energy is 2.3 trillion tce. The regions with the best solar radiation potential are the North Caucasus, the Black Sea and the Caspian Sea areas, and southern parts of Siberia and the Far East. This potential is largely unused, although the possibilities for off-grid solar energy or hybrid applications in remote areas are huge. However, the construction of a single solar power plant Kislovodskaya SPP (1.5 MW) has been delayed.

From Wikipedia:Wind power in Russia

Wind power in Russia has a long history of small-scale use, but the country has not yet developed large-scale commercial wind energy production. Most of its current limited wind production is located in agricultural areas with low population densities, where connection to the main energy grid is difficult. By 2018, Russia had a total installed wind capacity of 106 MW, a nearly ten-fold increase over 2016 but still a tiny share of the country’s potential.

Russia is estimated to have a total potential of 80,000 TWh/yr for wind energy, 6,218 TWh/yr of which is economically feasible. Most of this potential is found in the southern steppes and the seacoasts of the country, although in many of these areas the population density is very low, at less than 1 person per km2. This low population density means that there is little existing electricity infrastructure currently in place, which hinders development of these resources.

Current Russian wind energy projects have a combined capacity of over 1,700 MW, although less than 17 MW had been installed as of the end of 2010. The Russian Wind Energy Association predicts that if Russia achieves its goal of having 4.5% of its energy come from renewable sources by 2020, the country will have a total wind capacity of 7,000 MW.

From Wikipedia:Climate change in Russia § Society and culture

Environmental activism is a growing movement in Russia and it has developed into different shapes and forms, such as campaigns aiming to tackle both local and regional problems but also to address concerns including pollution, expansion of industries, non-sustainable forestry and further on. Around half of the Russian population (56%) lacks trust towards the country's agencies when it comes to environmental matters and 35% of the population are willing to take part of environmental protests.

'Everything is on fire': Siberia hit by unprecedented burning, Jul 20[1]

16,000 people in more than 120 Russian cities participate in "Bloggers against Garbage" action, August 11,[3] Marina Litvinovich. Not without controversy though, as some say this is the "straightforward responsibility of municipal authorities".

Fires rage on as Moscow suffers 'hottest day ever,[5] July 29

The Battle for Khimki Forest, Yevgenia Chirikova, March 17, Veronica Khokhlova,[6] "The plan to construct a section of the new Moscow-St.Petersburg motorway through the legally-protected Khimki Forest Park will destroy a rare eco-system. Dogged local resistance has turned this into a national, even international issue. But it has not derailed the plan."

Russia moves Sochi Olympic sites. The organizers of the 2014 Winter Olympic Games in the Black Sea resort of Sochi have decided to relocate several facilities away from a protected wilderness area,[8] July 4.

From Environmental Issues in Russia.[edit] 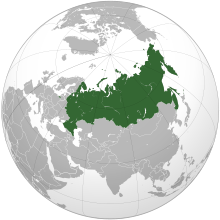 Page data
Retrieved from "https://www.appropedia.org/w/index.php?title=Russia_community_action&oldid=668816"
Cookies help us deliver our services. By using our services, you agree to our use of cookies.
Categories:
About Appropedia · Policies · Contact · Content is available under CC-BY-SA-4.0 unless otherwise noted.